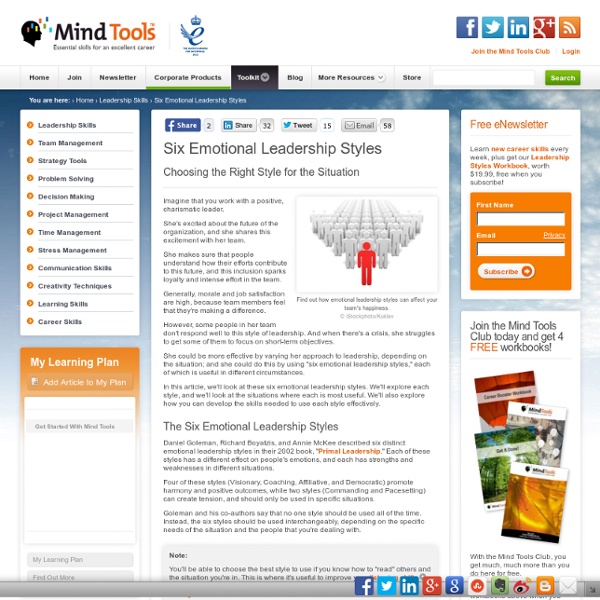 Choosing the Right Style for the Situation Find out how emotional leadership styles can affect your team's happiness. © iStockphoto/Kuklev Imagine that you work with a positive, charismatic leader. She's excited about the future of the organization, and she shares this excitement with her team. She makes sure that people understand how their efforts contribute to this future, and this inclusion sparks loyalty and intense effort in the team. Generally, morale and job satisfaction are high, because team members feel that they're making a difference. However, some people in her team don't respond well to this style of leadership. She could be more effective by varying her approach to leadership, depending on the situation; and she could do this by using "six emotional leadership styles," each of which is useful in different circumstances. In this article, we'll look at these six emotional leadership styles. The Six Emotional Leadership Styles Note: We'll now examine each style in more detail. 1. 2. Related:  Self Actualisation • How to Be an Emotionally & Socially Intelligent Leader

25 Killer Websites that Make You Cleverer It’s easy to forget that we have access to a virtually limitless resource of information, i.e. the Internet. For a lot of us, this is even true at our fingertips, thanks to the ubiquity of smartphones and an ever-increasing push for online greatness by tech engineers all over the world. As a result, there are countless websites out there that are geared to make you smarter and more brilliant for either a low or no cost. Here are just 25 killer websites that may just make you more clever than ever before. 1. This isn’t the first time I’ve recommended this language-teaching website (and app), and it certainly won’t be the last. 2. Have you ever wanted to pick up a subject you’re not well-versed in, but you didn’t have the money to invest in a college course? 3. Guitar is one of the few instruments out there that’s actually pretty easy to learn if you’re a little older, making it one of the most accessible instruments. 4. 5. 6. 7. 8. 9. 10. 11. 12. 13. 14. 15. 16. 17. 19. 20. 21. 22. 23.

untitled How To Motivate Yourself: 3 Steps Backed By Science You make goals… but then you procrastinate. You write a to-do list… but then you don’t follow through. And this happens again and again and again. Seriously, what’s the problem? Why are we so good at thinking of what to do but so terrible at actually doing those things? The problem is you’re skipping an essential step. The Mistake Every Productivity System Makes Productivity systems rarely take emotions into account. We can’t ignore our emotions. And we can’t fight our feelings. Via The Antidote: Happiness for People Who Can’t Stand Positive Thinking: …when experimental subjects are told of an unhappy event, but then instructed to try not to feel sad about it, they end up feeling worse than people who are informed of the event, but given no instructions about how to feel. So what does the unavoidable power of feelings mean for motivation? In their book Switch, Chip and Dan Heath say that emotions are an essential part of executing any plan: Focus on emotions. 1) Get Positive It’s optimism.

The Emotion Which Drives People To Work The Hardest People prone to this emotion work the hardest. People prone to feeling guilty are amongst the hardest workers, a new study finds. Not only that but people prone to feeling guilty are also highly ethical and are less likely to take advantage of other people’s skills to get paid more. The results come from research published in the Journal of Personality and Social Psychology, in which psychologists carried out 5 studies to test the effects of feeling guilty on work performance (Wiltermuth & Cohen, 2014). Dr. Scott S. “Because of this concern for the impact of their actions on others’ welfare, highly guilt-prone people often outwork their less guilt-prone colleagues, demonstrate more effective leadership and contribute more to the success of the teams and partnerships in which they are involved.” Set against these advantages, though, guilt-prone people may avoid working with others they see as more competent than themselves. Dr. Dr. Image credit: SalFalko

News - Is it good for people to fail occasionally? 2 March 2014Last updated at 19:47 ET By Lucy Wallis BBC News In our highly competitive world, we prize success and hate it when things go wrong, but is there actually a value in failing? When Irish author Flann O'Brien submitted the manuscript for his second book, The Third Policeman, to a London publisher in 1940 it was rejected. But rather than admit this lack of success to his friends, he pretended the manuscript had accidentally blown out of the boot of his car on a trip to Donegal and had been lost forever. "This was a ruinous thing to say because he couldn't then turn around and say, 'Oh I've found it again,' so the manuscript sat very openly on his sideboard until his death," says Booker Prize-winning author Anne Enright. She has selected O'Brien's story to appear in an exhibition entitled Fail Better at the Science Gallery at Trinity College, Dublin. "The year after [O'Brien's] death, his wife got it published to a keen reception." Continue reading the main story “Start Quote

Einstein's Puzzle # Copyright (C) 2004 Lauri Karttunen # # This program is free software; you can redistribute it and/or modify # it under the terms of GNU General Public License as published by # the Free Software Foundation; either version 2 of the License, or # (at your option) any later version. # This program is distributed in the hope that it will be useful, # but WITHOUT ANY WARRANTY; without even the implied warranty of # MERCHANTABILITY or FITNESS FOR A PARTICULAR PURPOSE. See the # GNU General Public License for more details. Einstein's Puzzle Variations of this riddle appear on the net from time to time. Let us assume that there are five houses of different colors next to each other on the same road. The Englishman lives in the red house. The question to be answered is: Who keeps fish? This is a simple constraint satisfaction problem. The next concept to define is that of a House. The result is a network with five paths. With C16 added, only one solution remains. We can now see the solution.

Related:
Related:  Self Actualisation   -  How to Be an Emotionally & Socially Intelligent Leader