Can Animal Behavior Help Us Understand Empathy and Dehumanization? 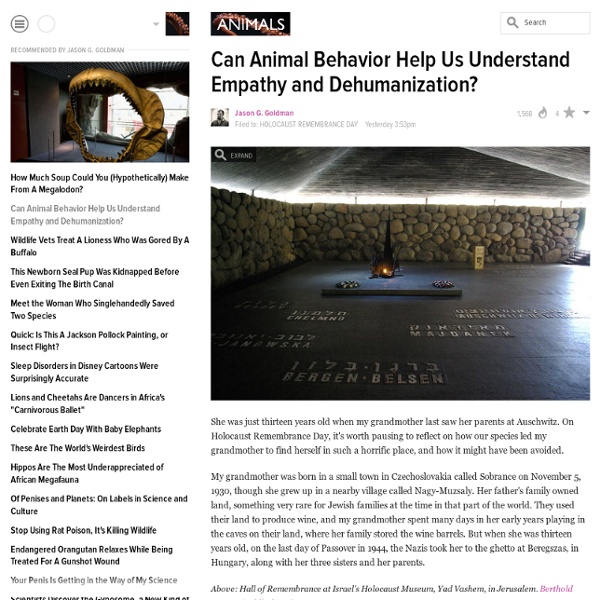 Myths about the Future that Could Ruin Your Life @FunkyJAU Because they're both the dreams of people who believe the status of society is basically a wrong, and eventually the day is gonna come that we'll get our just desserts. For some heaven, for others Siberia or the firing squads. We're just so happy in our sinfulness/decadence, well, we don't care. On both sides it's kind of like "the world is evil, I'm right, one of these days they're gonna understand how right I was". What about the covert Marxist take over of the modern media? (of course, Fox News is the exception to this!) Those aren't Marxists, those are doom peddlers. and Fox News is no exception.

Cognitive Dissonance Understanding this experiment sheds a brilliant light on the dark world of our inner motivations. The ground-breaking social psychological experiment of Festinger and Carlsmith (1959) provides a central insight into the stories we tell ourselves about why we think and behave the way we do. The experiment is filled with ingenious deception so the best way to understand it is to imagine you are taking part. So sit back, relax and travel back. The time is 1959 and you are an undergraduate student at Stanford University… As part of your course you agree to take part in an experiment on ‘measures of performance’. Little do you know, the experiment will actually become a classic in social psychology. The set-up Once in the lab you are told the experiment is about how your expectations affect the actual experience of a task. Perhaps you wonder why you’re being told all this, but nevertheless it makes it seem a bit more exciting now that you know some of the mechanics behind the experiment.

8 Horrifying Things We Do When No One's Looking When the founders of OkCupid started one of the most popular dating sites on the Internet, they didn't intend to find out all of humanity's deep, dark secrets. All they wanted was to help people make babies. However, they accidentally ended up with a treasure trove of information about the difference between what people say (and even think) about themselves and what they actually do -- and you won't like it. By analyzing the language and behavior of OkCupid users, they've determined that you're probably a lot more racist than you think, and you can actually guess someone's race with a stunning degree of accuracy based on what they care about. (It involves lumberjack music festivals.)

The amazing, surprising, Africa-driven demographic future of the Earth, in 9 charts - The Washington Post Traffic moves through downtown Lagos, Nigeria. (Dan Kitwood/Getty Images) The United Nations Population Division, which tracks demographic data from around the world, has dramatically revised its projections for what will happen in the next 90 years. If these numbers turn out to be right – they're just projections and could change significantly under unforeseen circumstances – the world of 2100 will look very different than the world of today, with implications for everyone. Here is the story of the next 90 years as predicted by UN demographic data and explained in nine charts. (1) The big story will be Africa Right now, with a couple of exceptions, Africa's population density is relatively low; it's a very big continent more sparsely populated than, say, Europe or East Asia. Asia will continue to grow but its population growth, already slowing, is expected to peak about 50 years from now then start declining. The story in those three little lines at the bottom is less promising.

10 Famous Psychological Experiments That Could Never Happen Today Nowadays, the American Psychological Association has a Code of Conduct in place when it comes to ethics in psychological experiments. Experimenters must adhere to various rules pertaining to everything from confidentiality to consent to overall beneficence. Review boards are in place to enforce these ethics. But the standards were not always so strict, which is how some of the most famous studies in psychology came about. 1. At Johns Hopkins University in 1920, John B. Watson tested classical conditioning on a 9-month-old baby he called Albert B. 2. Solomon Asch tested conformity at Swarthmore College in 1951 by putting a participant in a group of people whose task was to match line lengths. Thirty-seven of the 50 participants agreed with the incorrect group despite physical evidence to the contrary. 3. Some psychological experiments that were designed to test the bystander effect are considered unethical by today’s standards. 4. 5. 6. 7. 8. 9. 10.

Misguided Nostalgia for Our Paleo Pasts By Marlene Zuk The Kobal Collection, Hammer Raquel Welch in One Million Years B.C. (1966) The first thing you have to do to study 4,000-year-old DNA is take off your clothes. I am standing with Oddný Ósk Sverrisdóttir in the airlock room next to the ancient-DNA laboratory at Uppsala University, in Sweden, preparing to see how she and her colleagues examine the bones of human beings and the animals they domesticated thousands of years ago. The first step is to extract the DNA from the bones. We enter the lab, where the first thing we do is stretch another pair of gloves over the ones we just put on. To obtain the DNA, the bones are drilled and the powder from the interior is processed so that the genetic sequences inside are amplified—that is, replicated to yield a larger amount of material for easier analysis. Other than simple curiosity about our ancestors, why do we care whether an adult from 4,000 years ago could drink milk without getting a stomachache? But of course that isn't true.