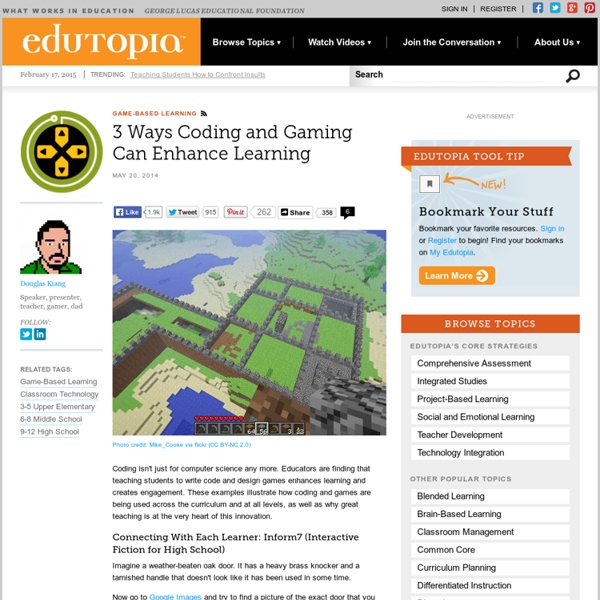 Coding isn't just for computer science any more. Educators are finding that teaching students to write code and design games enhances learning and creates engagement. These examples illustrate how coding and games are being used across the curriculum and at all levels, as well as why great teaching is at the very heart of this innovation. Connecting With Each Learner: Inform7 (Interactive Fiction for High School) Imagine a weather-beaten oak door. Now go to Google Images and try to find a picture of the exact door that you have seen in your head. Now imagine that as you approach the door, you notice deep scratches along the doorframe, as if something has been trying to get in . . . or trying to hold the door closed. Yet through the power of narrative description, we are all probably picturing the same door in our heads. The stumbling block for most students who are trying to write their adventure game is finding or creating graphics. Great Teachers Related:  Maker Education • Programación • SAMR, STEM, Guided Inquiry

The Importance of Thinking In- and Out-of-the-Box How to encourage creativity in a tech-based environment. GUEST COLUMN | by Wendy Marshall How do you teach a student to be creative? It used to be that educators encouraged innovation by telling children to “think outside the box” via a “sky’s the limit” approach. Creativity was viewed as unstructured and a result of not following rules or patterns. We encouraged students to eschew boundaries and limits, and open themselves up to the endless possibilities. During our summer Makers Camp that is put on by my educational center ExplorOcean, children (ages 9-13) participate in guided projects using tools such as Little Bits, Makey Makeyand Hummingbird robotics. It is important, especially in a tech-based environment, to encourage students to think both inside and outside the box. 1. Researchers who study prodigious accomplishments talk about the 10,000-hour rule, which means in order to be able to do something notable, one must devote 10,000+ hours to mastering that discipline. 2. 3. 4. 5.

10 places where anyone can learn to code Teens, tweens and kids are often referred to as “digital natives.” Having grown up with the Internet, smartphones and tablets, they’re often extraordinarily adept at interacting with digital technology. But Mitch Resnick, who spoke at TEDxBeaconStreet, is skeptical of this descriptor. Sure, young people can text and chat and play games, he says, “but that doesn’t really make you fluent.” Mitch Resnick: Let's teach kids to code Fluency, Resnick proposes in this TED Talk, comes not through interacting with new technologies, but through creating them. The former is like reading, while the latter is like writing. The point isn’t to create a generation of programmers, Resnick argues. In his talk, Resnick describes Scratch, the programming software that he and a research group at MIT Media Lab developed to allow people to easily create and share their own interactive games and animations. While we’re at it: bonus!

Clearing the Confusion between Technology Rich and Innovative Poor: Six Questions ** We are seeking global opinions, please consider commenting with your thoughts and ideas of the definition of innovation** In a recent webinar, more than 90% of school leaders responded that they were leading an innovative school as a result of the implementation of technology. At the end of the webinar, when polled again, only one leader claimed to be leading an innovative school. The complete reversal was due to a presentation of the Six Questions that you will read about in this article. Test your own level of innovation. (Beyond SAMR: Special note to those of you applying SAMR. Transformational Six Did the assignment build capacity for critical thinking on the web? 1. Before the Internet, our students accessed sources for homework that had been preselected by a teacher or a librarian. If you have ever watched a student research on the web you will probably observe that they enter the exact title of their homework for their search query. Compare two searches: “Iranian Hostage Crisis”

LittleBits Grows Up With New Arduino Module The world of littleBits (the “not-a-toy” toy that I reaaaally wish existed when I was younger) just got a little bit bigger: it can now play friendly with Arduino. If you’re not familiar with littleBits, it might help to think of it as a DIY Electronics kit mashed up with LEGO. Each “bit” is an individual electronic component, like a speaker, or a light sensor, or a blinky LED. Snap them together, and you can do all sorts of cool stuff — no programming required. Want to sound a buzzer every time someone walks in a room? That “no programming required” point has always been one of littleBits’ biggest strengths; it meant that anyone could start putting stuff together, pretty much by accident. Alas, up until now, “no programming required” also meant “no programming allowed”. There’s a reason why one of Google’s top suggestions for “littleBits” is “littleBits Arduino”. This morning, littleBits is introducing an Arduino module into the mix.

How to Get Girls Into Coding WHEN I was 7 years old, I knew the capitals of most major countries and their currencies. I had to, if I wanted to track down a devious criminal mastermind in the computer game “Where in the World Is Carmen Sandiego?” On screen, the ACME Detective Agency would spit out clues like notable landmarks to help players identify the city where Carmen’s globe-trotting henchmen were hiding out. I was the child of Indian immigrants, and like any begrudging Bengal tiger cub, I penciled in fill-in-the-blank maps and memorized multiplication tables after dinner. A huge nationwide push is underway, funded by the nonprofit Code.org’s corporate and billionaire donors, from Amazon and Google to Bill Gates and Mark Zuckerberg, to introduce American schoolchildren to coding and to redefine it as a basic skill to be learned alongside the three R’s. The imbalance persists in the tech industry. Continue reading the main story

Teaching Coding in Class: 17 Apps to Try November 17, 2014 Today as I was going through my bookmarks, I come across this excellent visual created by Sean Junkins where he features a bunch of powerful apps to help you teach coding in the classroom. Unfortunately, the visual does not render legible enough when turned into large infographic. So instead, I am sharing with you the apps featured in it. 1- Learning the basics A- Daisy the Dinosaur Learn the basics of computer programming with Daisy the Dinosaur! B- Move The Turtle Move The Turtle is an educational application for iPhone and iPad that teaches children the basics of creating computer programs, using intuitive graphic commands.2- Video tutorials Udacity courses are taught by industry experts from Facebook, Google, Cloudera and MongoDB. C- Khan Academy This is the official iPad app of the popular Khan Academy platform. D- Tree House Learn from over 1000 videos created by expert teachers on web design, coding, business, and much more. B- Cargo Bot Presenting Cargo-Bot.

SAMR Model Explained for Teachers Below is a great video explaining the SAMR model in 120 seconds. SAMR is a framework through which you can assess and evaluate the technology you use in your class. Here is how the video below shared by Candace M explains the SAMR's four levels: Substitution In a substitution level, teachers or students are only using new technology tools to replace old ones, for instance, using Google Docs to replace Microsoft Word. the task ( writing) is the same but the tools are different. Augmentation Though it is a different level, but we are still in the substitution mentality but this time with added functionalities. Modification This is the level where technology is being used more effectively not to do the same task using different tools but to redesign new parts of the task and transform students learning. Redefinition If you are to place this level in Blooms revised taxonomy pyramid, it would probably correspond to synthesis and evaluation as being the highest order thinking skills.

Growing Grit: My 8th Grade Garduino Project I have never had what some call a “green thumb.” I’ve mostly had a “brown thumb.” That is, I always forget to water, or I don’t water the right amount. Or I forget to give the plant the right amount of sunlight. Here’s my Garduino prototype that I made in the very beginning. I started to think about what functions I wanted my Garduino to perform. I hit many problems along the way, which helped with instilling “grit,” the trait of not giving up even when you hit obstacles, something my grade school principal, Tom Hoerr at New City School, was also very focused on. I also had many problems with the circuitry, which has many small wires that are all close, tight, and complicated to make work. This is my circuit and Arduino. In the code, the light works by measuring the light intake over a short period of time. Here you can see my plant lamp and sprinkler head over my basil plant. ​This is my basil plant up close; you can see the galvanized nails and the photocell. Related