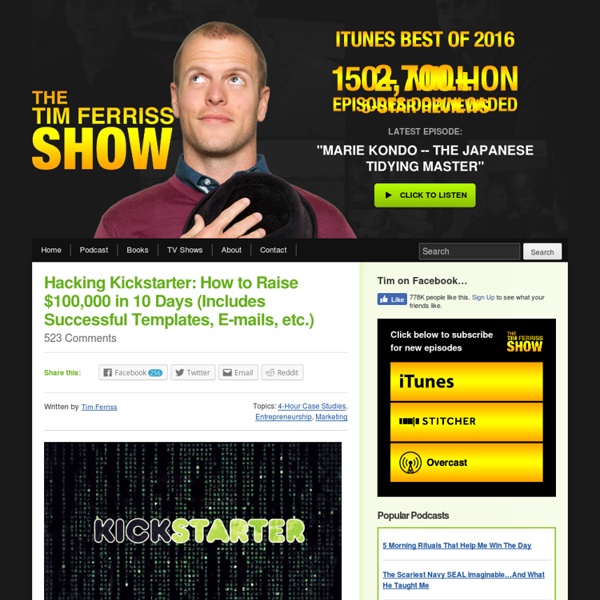 Mike Del Ponte co-founded Soma, which raised more than $100,000 on Kickstarter using virtual assistants and free apps. I first met Mike Del Ponte two years ago when he was running marketing at BranchOut, a startup I advise. Before joining BranchOut, Mike had explored a variety of career paths, including preparing for the priesthood at Yale Divinity School and serving as a peacemaker in the West Bank. Earlier this year, Mike came to me with a new product idea called Soma. Soma is, in its simplest form, a high-end competitor to Brita water filters. It combines Apple-inspired design (e.g. sleek glass carafe) with a subscription service that delivers the world’s first compostable water filter to your door. To launch Soma on Kickstarter (and raise $100,000+ in just nine days), Mike and his team used some of the techniques that helped BranchOut grow to 25 million users in just 16 months. You can replicate what he did. This post is as close to copy-and-paste Kickstarter success as you will find.

FateMore Kickstarter Analysis Okay! This is a big topic, but I'll try to keep it brief. First, the general case. How to crowd-fund community projects A radical new solution to funding community regeneration projects is being piloted in the ex-mining town of Glyncoch, South Wales. While most donors will never even visit, the reach of Twitter allows popular projects to tap into new funding sources. Can Twitter build a community centre? Stephen Fry seems to think so. He's backed a campaign to crowd-fund a community centre in a town battered by disappointment for seven years.

Charity Crowdfunding: what's in it for you? As a fundraiser you’ve probably heard it before: crowdfunding. Did you know that in 2011 almost $ 1.5 billion was raised through crowdfunding platforms worldwide? And the sky seems to be the limit with this fundraising technique. 35 Growth Hacking Tools for Marketers Who Don’t Code Growth hacking is one of the most talked-about terms in the startup and marketing worlds. Some see it as a revolutionary way of shaping and accelerating startup growth, while others consider it a fancy word for marketing. I used to fall into the latter camp, but Neil Patel’s guide to growth hacking helped me see how a growth hacker’s job differs from a traditional marketer’s job. Here’s how Patel defines growth hacking: Growth hackers, using their knowledge of product and distribution, find ingenious, technology-based, avenues for growth that sometimes push the bounds of what is expected or advised. How does this differ from marketing?

Kickstarter Tips for Role Playing Games Links last updated Sat Sep 24 11:40 PDT 2016 Top 10 RPG Kickstarters by amount funded last updated Fri Sep 16 23:59 PDT 2016 .I also track Top 10 RPG Kickstarters by number of backers. Keeping an eye on these Active Kickstarters ( last updated Sat Sep 24 08:55 PDT 2016 (UTC -7) ) Kickstarter offers a list of all ongoing RPG-related kickstarters. 15 ways to crowdfund your startup or project Have you considered asking the community to support your new enterprise? Target audience: Social enterprises, nonprofits, volunteer groups, sustainable businesses, community organizations. Guest post by Kerry GivenGreen Marketing TV Finding funding can be one of the biggest challenges for social entrepreneurs. Fortunately, there is a growing number of options for social entrepreneurs and founders looking for capital to start or expand their social enterprise, startup or nonprofit organization and do more good in the world. One non-traditional funding opportunity that has seen exponential growth in recent years is the phenomenon of “crowdfunding.”

Crowdfunding: When and How to Use It One of the hot new topics around fundraising in 2012 was the idea of crowdfunding. Over a billion dollars was raised worldwide through crowdfunding in 2011 and those numbers were expected to nearly double in 2012, with nearly half the total going to nonprofits. That’s a huge amount of money, making it hard to deny the fact that crowdfunding has become an important fundraising channel. So, should your nonprofit use crowdfunding?