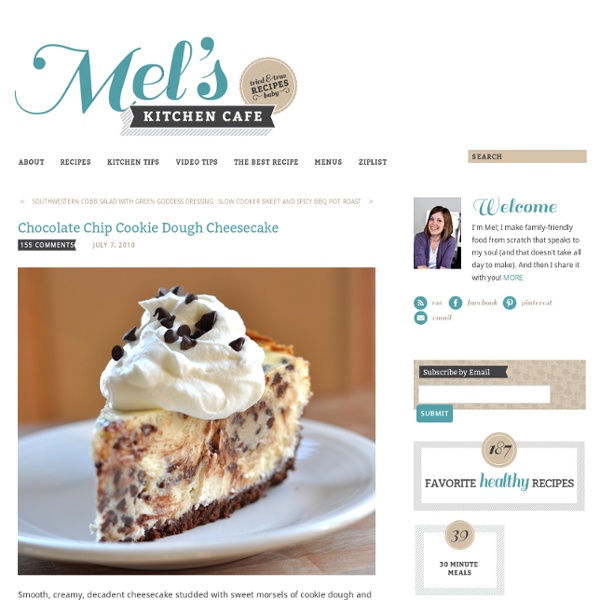 Peanut Butter Cup Chocolate Cake Cheesecake Last week I got an email from a kind reader asking if I would consider developing a recipe for one of her favorite "factory-made" desserts. The minute I clicked the link she provided, I knew I wanted to make her cheesecake dreams come true. I had concerns about how this cake would translate to real world baking. No doubt it is mass-produced with industrial equipment since it is sold nationwide at a popular restaurant chain. I knew I would have to simplify each of the recipe's elements and keep the baking equipment simple. With its many layers, the recipe I came up with is time consuming, but it will not be difficult for the home baker to execute. The Hazel Bloom: The Best Macaroni and Cheese Recipe Ever I can say this is the best macaroni and cheese recipe ever because it's not really my recipe. I tweaked it a tiny bit - basically made it even more fattening - but otherwise, it's someone else's. It's from someone named Bev, who posted her recipe on Recipezaar and to whom I am eternally grateful. See, macaroni and cheese is pretty much my all-time favorite food. Always has been. Cases in point:

Handle the Heat » White Chocolate-Macadamia Nut Cookie Dough Blondies I hope you’re still enjoying my new site design! Today’s recipe actually comes from The Cookie Dough Lover’s Cookbook which was written by Lindsay, the same woman who designed my website. When the book arrived at my house from Amazon, I practically drooled over every page. Blogger For Hire - StumbleUpon This pancake recipe is the result of mixing and matching different recipes from many different sources. It is the result of trying and failing so many times, that I almost declared pancakes as the one breakfast recipe I couldn’t master. But I persisted, and this recipe is perfect – as perfect as a pancakes recipe can be, because making pancakes does involve frying, and frying is something that each of us needs to play with. It changes depending on your type of stove (gas or electric), on how hot the skillet is, and on how evenly hot you manage to keep it while frying multiple batches. But the instructions here are as close as it gets to “perfect,” and the result?

Salted Chocolate We’re watching our friend’s cat right now, and it’s a lot of fun. Kramer and I want to get a pet so badly, but I just don’t think that I have the time, energy, or, frankly, money, to take care of an animal the way I would like to. For now, though, it’s just fun to pretend to have a pet for a week. His name is Eddie and he’s pretty funny. Marijuana Cooking, Recipes, Tutorials, Cannabutter, more The Cannabis Chef Search Weed Recipes Marijuana (Cannabis) Cookies by The Cannabis Chef February 5, 2013 Make Your Own Girl Scout Cookies Make Your Own Girl Scout Cookies, Sans The Artificial Ingredients Whether you want to avoid some of the highly-processed ingredients (like trans fats and palm oil) or you just can’t wait for the annual cookie sale, we’ve got some simple ways to make healthier versions of these classic treats. Why Make Your Own Though Girl Scout cookies boxes say “trans-fat free,” the term is officially defined by the FDA as a food that contains less than 0.5 grams of trans fat per serving, meaning some varieties — including uber-popular Thin Mints, Samoas and Tagalongs — still contain trace amounts of the fat. The giveaway: Look for “partially-hydrogenated” on the ingredient list. That ingredient list also contains palm oil and preservatives — your homemade ones will just taste better. 2 Recipes, 5 Different Girl Scout Cookies Many of the favorite Girl Scout cookies begin with the same base: The classic shortbread cookie.

Kiss Pies Only 5 days before Christmas! Woohoo, is everyone ready? What a great time of year. This really is the best…..even if I feel like I’ve gained 50 lbs the last month! The Baker's Daughter: Polka dot cheesecake I saw someone wearing the greatest polka dot rain coat today and it inspired me to make this cheesecake. It needs to be refrigerated overnight so make sure you make it the day before you want to serve it. I find that popping it into the freezer for about 1/2 hour makes it a lot easier to cut. Using a knife dipped in hot water between cuts also helps to make clean edges. If you want to make this into a traditional cheesecake you will need an 8 inch spring form pan. Crust

it ain’t broke, but This recipe, I admit, is a little gimmicky. It’s reminiscent of an overplayed commercial featuring bad lighting and the latest, greatest idea: the snuggie, for instance (like a blanket, except it has armholes!), or perhaps the clapper (clap on! clap off!). This recipe, unlike those commercials, has the advantage of Martha Stewart (or at least her brand) proclaiming its virtues. Kitchen Tips 1. Stuff a miniature marshmallow in the bottom of a sugar cone to prevent ice cream drips. 2. Use a meat baster to "squeeze" your pancake batter onto the hot griddle - perfect shaped pancakes every time. 3. To keep potatoes from budding, place an apple in the bag with the potatoes.

How to Make Your Own Energy Bars Being a frugal road biker is tricky. At times, it’s near impossible. So when I started training for LOTOJA last spring I instinctively shielded my wallet when the realization struck me of how much I would be eating, let alone pedaling, on my long training rides. Armed with the sum of human wisdom (Google) and a tough set of intestines, my homemade energy bars recipe experiment ended with this tasty number. At less than $.20 per 200 calorie bar, it satisfied my hunger and my budget. Energy Bars Ingredients List 1 1/4 cups store brand Crisp Rice (Rice Krispies) 1 cup uncooked quick oats 2 tablespoons flaxseed meal 1/4 cup chopped raisins 1/2 teaspoon cinnamon 1/3 cup maple syrup 1/2 cup peanut butter 1 teaspoon vanilla