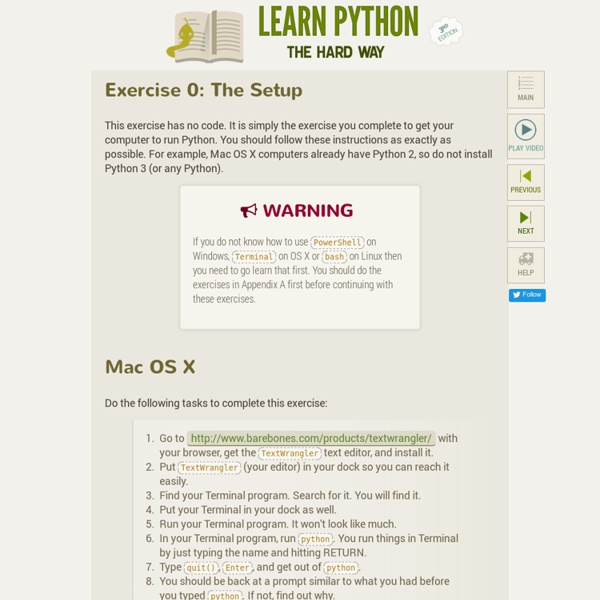 This exercise has no code. It is simply the exercise you complete to get your computer to run Python. You should follow these instructions as exactly as possible. For example, Mac OS X computers already have Python 2, so do not install Python 3 (or any Python). Go to with your browser, get the Notepad++ text editor, and install it. You do not need to be the administrator to do this.Make sure you can get to Notepad++ easily by putting it on your desktop and/or in Quick Launch. From now on, when I say "Terminal" or "shell" I mean PowerShell and that's what you should use. Warning Sometimes you install Python on Windows and it doesn't configure the path correctly. > python ActivePython 2.6.5.12 (ActiveState Software Inc.) based on Python 2.6.5 (r265:79063, Mar 20 2010, 14:22:52) [MSC v.1500 32 bit (Intel)] on win32 Type "help", "copyright", "credits" or "license" for more information. >>> quit()> mkdir mystuff > cd mystuff ... Here's a screenshot of me doing this search:

2. Built-in Functions Open a file, returning an object of the file type described in section File Objects. If the file cannot be opened, IOError is raised. When opening a file, it’s preferable to use open() instead of invoking the file constructor directly. The first two arguments are the same as for stdio‘s fopen(): name is the file name to be opened, and mode is a string indicating how the file is to be opened. The most commonly-used values of mode are 'r' for reading, 'w' for writing (truncating the file if it already exists), and 'a' for appending (which on some Unix systems means that all writes append to the end of the file regardless of the current seek position).

MATLAB Source Codes analemma, a program which evaluates the equation of time, a formula for the difference between the uniform 24 hour day and the actual position of the sun, based on a C program by Brian Tung. area_under_curve, a function which displays the area under a curve, that is, the points (x,y) between the x axis and the curve y=f(x). args, a program which shows how to count and report command line arguments; arpack, a library which computes eigenvalues and eigenvectors of large sparse matrices, accessible via MATLAB's built-in eigs() command; asa005, a library which evaluates the lower tail of the noncentral Student's T distribution, by BE Cooper.

www.catonmat One of the upcoming projects I am doing (I will reveal it in one of the next blog posts.) is going to be written entirely in Python. I have a good understanding of Python but, same as I had with JavaScript, I have little experience doing projects from the ground up in it. Update: the project was redditriver.com, read designing redditriver.com (includes full source code). Before diving into the project I decided to take a look at a few Python video lectures to learn language idioms and features which I might have not heard of. Finding Python video lectures was pretty easy as I run a free video lecture blog. First Python Lecture: Python for Programmers AOS 575: Climatological Analysis Sample code for setting up a map axis to plot a polar-stereographic plot: plot_polar_stereo.m EOF Analysis eof_routine.m cosweight.m Suppose you want to perform EOF analysis on tropical Pacific SST from the NCEP reanalysis. Here's a quick way to do that, assuming you've downloaded my matlab libraries, above: lims = [120 285 -30 30]; tim = get_time(1948,2002,1948); [sst, lat, lon] = getnc2('skt.mon.mean.nc', 'skt', lims, 1, tim); land = getnc2('land.sfc.gauss.nc', 'land', lims, 1, 1); sst = remove_anncyc(sst); sst = cosweight(sst, lat); [lam, lds, pcs, per] = eof_routine(sst(:,land==0)); % Get a scaled map of the leading EOF eof1 = repmat(NaN, [length(lat) length(lon)]); eof1(land == 0) = lds(:,1)*sqrt(lam(1)); eof1 = uncosweight(eof1, lat); chi2example.m: 1. A demo for using the Chi2 distribution to determine confidence limits on variance 2.

Cheatsheet - Python & R codes for common Machine Learning Algorithms In his famous book – Think and Grow Rich, Napolean Hill narrates story of Darby, who after digging for a gold vein for a few years walks away from it when he was three feet away from it! Now, I don’t know whether the story is true or false. But, I surely know of a few Data Darby around me. These people understand the purpose of machine learning, its execution and use just a set 2 – 3 algorithms on whatever problem they are working on. They don’t update themselves with better algorithms or techniques, because they are too tough or they are time consuming. Like Darby, they are surely missing from a lot of action after reaching this close!

CodingEntrepreneurs A Programming Class for the Non-Technical Founder. Learn Python, Django, Twitter Bootstrap, APIs, HTML, CSS, Accept Payments with Stripe.com, & More. Work Alongside Me & Learn Exactly How To Code From Scratch. See all the projects at: If you have ever thought about starting a web-based business or project, these are the classes for you. MATLAB Central - HBV Hydrologic Model - Education Version (MATLAB Code) - What are tags? A tag is like a keyword or category label attached to an entry in the Link Exchange. Tags make it easier to find or recall particular links of interest. They're also a good way to categorize your bookmarked items, so you can browse your bookmarks by subject.

HTML Scraping Web Scraping Web sites are written using HTML, which means that each web page is a structured document. Sometimes it would be great to obtain some data from them and preserve the structure while we’re at it. Web sites don’t always provide their data in comfortable formats such as csv or json. This is where web scraping comes in. Web scraping is the practice of using a computer program to sift through a web page and gather the data that you need in a format most useful to you while at the same time preserving the structure of the data.