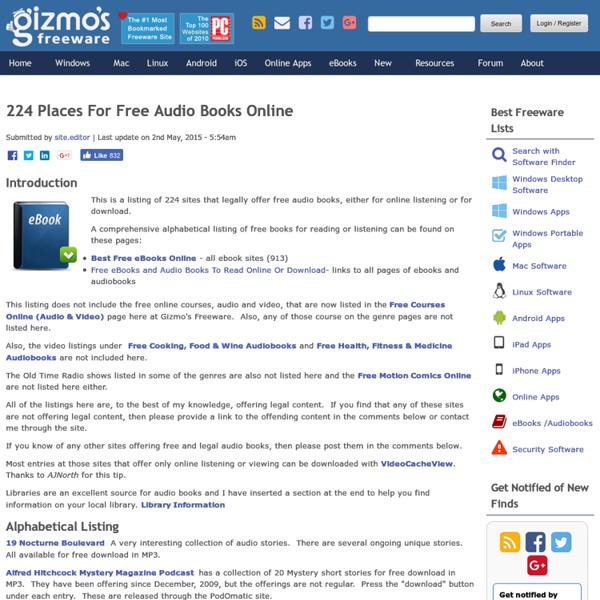 Introduction This is a listing of 224 sites that legally offer free audio books, either for online listening or for download. A comprehensive alphabetical listing of free books for reading or listening can be found on these pages: This listing does not include the free online courses, audio and video, that are now listed in the Free Courses Online (Audio & Video) page here at Gizmo's Freeware. Also, any of those course on the genre pages are not listed here. Also, the video listings under Free Cooking, Food & Wine Audiobooks and Free Health, Fitness & Medicine Audiobooks are not included here. The Old Time Radio shows listed in some of the genres are also not listed here and the Free Motion Comics Online are not listed here either. All of the listings here are, to the best of my knowledge, offering legal content. If you know of any other sites offering free and legal audio books, then please post them in the comments below. Alphabetical Listing AmblingBooks offers over 1500 free audio books.

Learn how to throw lethal playing cards If you watch the following video, you will be able to see one of the world’s leading card-throwing experts practicing his craft. With a business card and a flick of his wrist he can pop balloons, extinguish candles, hit targets, etc.: Around the 50-second point, you will also see him impale a tomato with a business card. 500 Free Audio Books Download Great Books for Free Open Culture Get FREE AUDIO BOOKS from Audible.com and also Audiobooks.com Download hundreds of free audio books, mostly classics, to your MP3 player or computer. Below, you'll find great works of fiction, poetry and non-fiction, by such authors as Twain, Tolstoy, Hemingway, Orwell, Vonnegut, Nietzsche, Austen, Shakespeare, Asimov, HG Wells & more. Also please see our related collection: The 150 Best Podcasts to Enrich Your Mind. Fiction & Literature

The Monster Club Beyond Tomorrow Trouble With Robots - The trouble with robots is that they do exactly as told, no matter what... The Creaking Door Auntie May - After a tragedy in which the woman he loves is killed, a man begins to have nightmares. Best Free Audio Books Online April 2, 2009 Here we have showcased 50 of the top free audiobook downloads available online. For the past three years we've featured a Free Audio Book every Friday as part of our Free Resource of the Day Emails. From these resources we've selected the top 50 free audiobook downloads. You can check them all out by clicking the titles below.

Principles of writing radio drama by Tim Crook Here are some horrible truths: Most radio drama is very badly written. Radio drama is an endangered species. It has never taken a hold of mainstream programming on commercial radio in the UK. How the Necronomicon Works" Weird fiction author H.P. Lovecraft created a mythology that includes bizarre monsters, troubled communities, insane scholars and a library of books filled with forbidden lore. Of all the books detailing this mythology that Lovecraft mentions in his fiction, one in particular captures the imagination more than any other: the "Necronomicon." According to Lovecraft, it's a tome filled with secrets and rituals that can drive a reader to the brink of insanity. In reality, the "Necronomicon" doesn't exist, though more than a half dozen books with the title "Necronomicon" are available at bookstores.

101 Short Stories that Will Leave You Smiling, Crying and Thinking post written by: Marc Chernoff Email Since its inception eighteen months ago, our sister site Makes Me Think (MMT) has truly evolved into a remarkable online community. Every day, users share their thought-provoking life stories and vote on stories that other users have shared. Some are happy, some are sad, and others twist your emotions, pulling them in several directions at once. Learn Criss Angel Style Magic Tricks "Awesome, you're a great illusionist!" Criss Angel is a great entertainer, performing many stunning illusions. Here are some great Criss Angel style coin tricks that look like real magic!

Multiple Choice Zombie Apocalypse Survival Game You really aren't awake yet. You never are until at least your second cup of coffee, and this is only your first. You're having a hard time getting your eyes to focus. But it certainly looks like there's a man in your front yard, crouched down on all fours, gnawing at a leg.

15 Bogeymen From Around The World Creepy The bogeyman is a legendary ghost-like monster. The bogeyman has no specific appearance and conceptions of the monster can vary drastically even from household to household within the same community; in many cases he simply has no set appearance in the mind of a child, but is just an amorphous embodiment of terror.

Ancient d20 die emerges from the ashes of time Let's go back in time. Way back. Keep going. OK, stop. You're in the Ptolemaic Period. It's somewhere around 304 to 30 B.C. Hand Shadow Illusions Mind Bluff - contents - Quick Links Optical Tricks Genius Teasers Meet the man who invented the emoticon ... in 1879 In 1982, computer scientist Scott Fahlman became the first person to suggest that typing the characters ":-)" or ":-(" could be used to express a happy or sad face, and therefore display a sense of emotion. On that fateful day the now-ubiquitous emoticon was born, but that shorthand we now know and love (or loathe, depending on your point of view) actually started more than a century earlier, when communicating long distances meant using a lot of dots and dashes. In the late 19th century, just about the only way to quickly send a message over long distances was by using the telegraph. These then-innovative devices used Morse code to translate text into long and short beeps (dashes and dots), which were received and retranslated back into text on the other side. Telegraphs sped up world communications in the late 1800s — they were much faster than mailed letters, after all — but they had a few key drawbacks. They were expensive (each letter mattered) and they still took time to transmit.