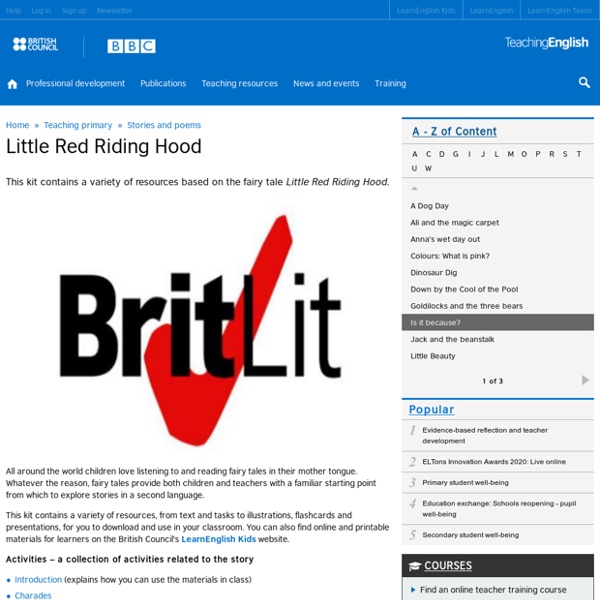 All around the world children love listening to and reading fairy tales in their mother tongue. Whatever the reason, fairy tales provide both children and teachers with a familiar starting point from which to explore stories in a second language. This kit contains a variety of resources, from text and tasks to illustrations, flashcards and presentations, for you to download and use in your classroom. You can also find online and printable materials for learners on the British Council's LearnEnglish Kids website. Activities – a collection of activities related to the story Chants – a collection of spoken drill type activities Let's go to Grandma'sPlease don't play in the woodTummy, teeth and tailWhat a good girl! Flashcards – to help you to build up vocabulary and support understanding Working with flashcards (notes for teachers)CharactersBodyClothesFoodHomeLittle Red Riding HoodWoodWord cue cards Play – to help you to use the materials to produce a short play About this BritLit Kit

Dreamtime stories - The water hole + How trees were created Monday 8 april 2013 1 08 /04 /Apr /2013 14:10 - Posted in: 4ème 3 - Juniors Hi guys, today we worked with Kathryn on Australia and Aborigines again. You could watch a video about one of the Aborigines' beliefs, a story that they created to explain the creation of the world. Klondike - Rush for Gold In the summer of 1897 two ocean going steamers landed on the west coast of the United States. One ship, The Excelsior, landed in San Francisco and three days later The Portland landed in Seattle. Down the gangplank of these two ships went a rag-tag group of men and women carrying sacks of gold. Some walked down the docks with $5,000 worth of gold while others had over $100,000 worth. The miners told of the rich claims they had staked one year earlier on a series of small creeks flowing into the Klondike River.

1st Grade Reading Comprehension Worksheets These reading worksheets were written at a first grade level, but it's important to remember that reading level varies from student to student. After they read the passage, students then answer the comprehension questions that follow. Reading comprehension worksheets that are aligned with the Common Core Standards are indicated with the apple core icon ( We Tell Stories - Stories Six Stories Week 1:The 21 Steps with Charles Cumming "I was the wrong man in the wrong place at the wrong time." One minute, Rick Blackwell is sightseeing at St. Top 10 Irish Myths and Legends Ireland’s long history is riddled with ancient mythology and folklore. Ireland’s ancient societies, the Druids and the Celtics, believed in the power of magic and many of these beliefs spread to modern day legends told again3 and again across the country. Stories of warriors with all the knowledge of the world, fairies playing pranks on farm owners and leprechauns hiding their gold at the end of a rainbow add to the mysterious appeal of Ireland.

Free Word Games, Vocabulary Building Exercises, English Language Quizzes Looking for mobile games? Create words on the letter wheels Mastermind variation with words Illuminate the hidden word with your mouse Fill in the blanks to finish the arithmetic problem Matilda Matilda Wormwood is only five years old, but she is a genius. Unfortunately her parents are too stupid to even notice. Worse, her horrible headmistress Miss Trunchbull is a bully who makes life difficult for Matilda's teacher, Miss Honey, and her friends. But what Miss Trunchbull doesn't know is that Matilda has a trick or two up her sleeve... Matilda won the Children's Book Award shortly after it was published in 1988, and it has continued to delight audiences ever since.

Tripppin - Learn English Around The World Roald Dahl’s City Of The Unexpected – Roald Dahl By Wales Millennium Centre & National Theatre Wales The fact that Roald Dahl was born and spent his early years here in Cardiff is remarkably little known beyond diehard fans. On the week of his centenary, , produced by Wales Millennium Centre and National Theatre Wales with director Nigel Jamieson, not only put the city firmly on the international map; it also reclaimed our beloved son in spectacular style. It was an experience the whole city would remember for a generation. The vision was to stage an event that took the city by surprise; a series of spectacles and unexpected performances, from the very intimate to the astonishingly big. The programme of events wouldn’t be made public in advance, and there would be no conventional sharing of his stories.