The Ultimate Start to Finish Guide to Your XBMC Media Center 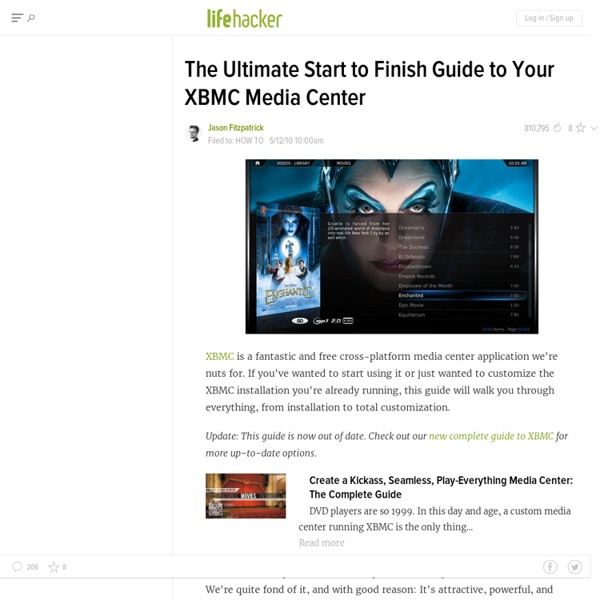 What You Need to Build Your Own Home Theater PC You can build your own HTPC that integrates with your home theater system — if you have the knowledge and the skills needed to install cards, drives, and so on. The information presented here is also useful if you want to order a new or customized PC online and need to know what specs you'll need for your HTPC. An increasing number of small, specialty PC builders, such as the folks at Digital Connection, can put an HTPC together for you. The key pieces and parts to any HTPC are the following: Fast processor: You need a fast Core II Duo processor (preferably 2.0 GHz or faster) or an equivalent AMD processor. Home Theater Glossary An industry standard for a type of wireless computer LAN. An acronym for Advanced Audio Codec. accessories Supporting devices (such as universal remote controls, touchpads, or digital media adapters) that make the content in your home theater accessible from another location. analog aspect ratio attentuation The weakening of an audio signal as it travels over a cable.

Official Wiki Categories Community News ARTICLE - "Hello everyone. In case it wasn't obvious. 0.27 is now officially out... People still on 0.25, please update. 0.25 has been reached End Of Life. more information about 0.27 and all its goodies can be found on the mythtv web site: www.mythtv.org" Copied from a post on mythtv-users. Stevegoodey 12:34, 19 September 2013 (UTC) ARTICLE - Hi, The current timetable for the release of MythTV 0.27 is: alpha July 21th Only bug fixes * Soft freeze for translatable strings. * beta August 3rd Only critical bug fixes allowed after this date. rc0 August 10th Release Candidate. As always these dates are subject to change if the resolution of some critical/blocker bugs needed it. Regards, Nicolas MythTV developer Stevegoodey 07:11, 19 July 2013 (UTC) ARTICLE - LinHES R7.4 anniversary edition I'm happy to announce the release of LinHES R7.4 "rdt". -- Enjoy the day, Cecil -- Stevegoodey 15:19, 9 August 2012 (UTC) -- Daniel ARTICLE - LinHES.

Guide Beginner's Guide to Building a Home Theater PC May 02 2011 We have covered a number of Beginner’s Guides in our effort to help out newcomers to the world of home theater computers. Topics covered include the basics, video resolutions, codecs and how they affect you, media players, frame rates and more. So hopefully you have read and enjoyed those as now the fun part begins--building an HTPC! There are a variety of reasons why you might be interested in building a home theater PC (HTPC); perhaps you are intrigued by the idea of consolidating all your music, movies, and pictures into a central location. We often start with the motherboard first as it’s the central brain of any computer and is the most difficult to change in the future. The ASRock 880GMH/USB3 was selected for the motherboard. Coupled to this board we chose the AMD Athlon II X2 250 Regor 3.0GHz processor. Memory is not really a big deal unless you are a serious gamer looking for extremely low CAS latency or overclocking capabilities. Next up is the hard drive.