New Quantum Theory Could Explain the Flow of Time 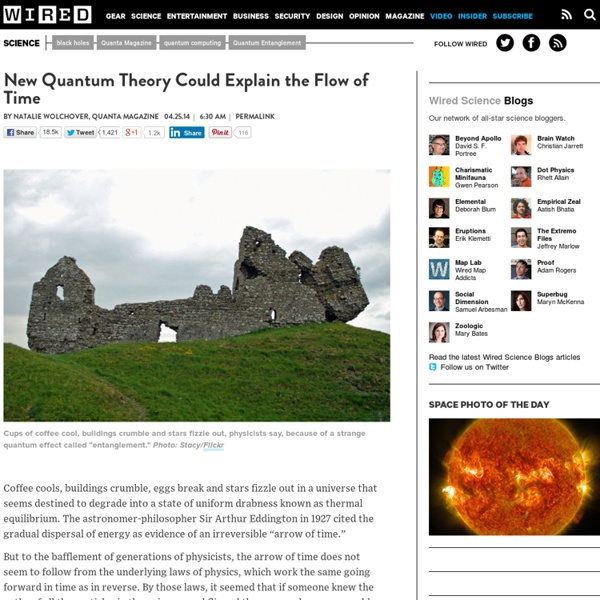 Cups of coffee cool, buildings crumble and stars fizzle out, physicists say, because of a strange quantum effect called “entanglement.” Photo: Stacy/Flickr Coffee cools, buildings crumble, eggs break and stars fizzle out in a universe that seems destined to degrade into a state of uniform drabness known as thermal equilibrium. The astronomer-philosopher Sir Arthur Eddington in 1927 cited the gradual dispersal of energy as evidence of an irreversible “arrow of time.” But to the bafflement of generations of physicists, the arrow of time does not seem to follow from the underlying laws of physics, which work the same going forward in time as in reverse. By those laws, it seemed that if someone knew the paths of all the particles in the universe and flipped them around, energy would accumulate rather than disperse: Tepid coffee would spontaneously heat up, buildings would rise from their rubble and sunlight would slink back into the sun. “I was darn close to driving a taxicab,” Lloyd said.

Simulations back up theory that Universe is a hologram Artist's impression by Markus Gann/Shutterstock At a black hole, Albert Einstein's theory of gravity apparently clashes with quantum physics, but that conflict could be solved if the Universe were a holographic projection. A team of physicists has provided some of the clearest evidence yet that our Universe could be just one big projection. In 1997, theoretical physicist Juan Maldacena proposed1 that an audacious model of the Universe in which gravity arises from infinitesimally thin, vibrating strings could be reinterpreted in terms of well-established physics.

Earth - Why is there something rather than nothing? People have wrestled with the mystery of why the universe exists for thousands of years. Pretty much every ancient culture came up with its own creation story - most of them leaving the matter in the hands of the gods - and philosophers have written reams on the subject. But science has had little to say about this ultimate question. However, in recent years a few physicists and cosmologists have started to tackle it. They point out that we now have an understanding of the history of the universe, and of the physical laws that describe how it works.

Spacecraft Propulsion Device Invented by 19-year Old Student By: Amanda Froelich, True Activist. With passion to persevere and see a project succeed, anything is possible. This is certainly true for a young student in the Middle East.Aisha Mustafa, a 19-year old female student from the University of Sohag in Egypt, recently developed a new type of propulsion system for space crafts. Her newly patented invention uses cutting edge quantum physics instead of thrusters, and is an innovative design that may radically change a more than one field.

New math and quantum mechanics: Fluid mechanics suggests alternative to quantum orthodoxy The central mystery of quantum mechanics is that small chunks of matter sometimes seem to behave like particles, sometimes like waves. For most of the past century, the prevailing explanation of this conundrum has been what's called the "Copenhagen interpretation" -- which holds that, in some sense, a single particle really is a wave, smeared out across the universe, that collapses into a determinate location only when observed. But some founders of quantum physics -- notably Louis de Broglie -- championed an alternative interpretation, known as "pilot-wave theory," which posits that quantum particles are borne along on some type of wave. According to pilot-wave theory, the particles have definite trajectories, but because of the pilot wave's influence, they still exhibit wavelike statistics. John Bush, a professor of applied mathematics at MIT, believes that pilot-wave theory deserves a second look. Tracking trajectories

Three Seconds: Poems, Cubes and the Brain A child drops a chocolate chip cookie on the floor, immediately picks it up, looks quizzically at a parental eye-witness and proceeds to munch on it after receiving an approving nod. This is one of the versions of the "three second rule", which suggests that food can be safely consumed if it has had less than three seconds contact with the floor. There is really no scientific basis for this legend, because noxious chemicals or microbial flora do not bide their time, counting "One one thousand, two one thousand, three one thousand,…" before they latch on to a chocolate chip cookie.

Simulations back up theory that Universe is a hologram Artist's impression by Markus Gann/Shutterstock At a black hole, Albert Einstein's theory of gravity apparently clashes with quantum physics, but that conflict could be solved if the Universe were a holographic projection. A team of physicists has provided some of the clearest evidence yet that our Universe could be just one big projection. In 1997, theoretical physicist Juan Maldacena proposed1 that an audacious model of the Universe in which gravity arises from infinitesimally thin, vibrating strings could be reinterpreted in terms of well-established physics.

Physicists Achieve Quantum Teleportation of Photon Over 25 Kilometers For the first time, a team of physicists have successfully teleported a quantum state of a photon to a crystal over 25 kilometers away through a fiber optic cable. This effectively showed that the photon’s quantum state, not its composition, is important to the teleportation process. The team was led by Nicolas Gisin of the University of Geneva and the results were published in the journal Nature Photonics. Ants Swarm Like Brains Think - Issue 23: Dominoes Deborah Gordon spent the morning of August 27 watching a group of harvester ants foraging for seeds outside the dusty town of Rodeo, N.M. Long before the first rays of sun hit the desert floor, a group of patroller ants was already on the move. Their task was to find out whether the area near the nest was free from flash floods, high winds, and predators. If they didn’t return to the nest, departing foragers would know it wasn’t safe to go search for food.

New Clock May End Time As We Know It Strontium atoms floating in the center of this photo are the heart of the world's most precise clock. The clock is so exact that it can detect tiny shifts in the flow of time itself. Courtesy of the Ye group and Brad Baxley/JILA hide caption