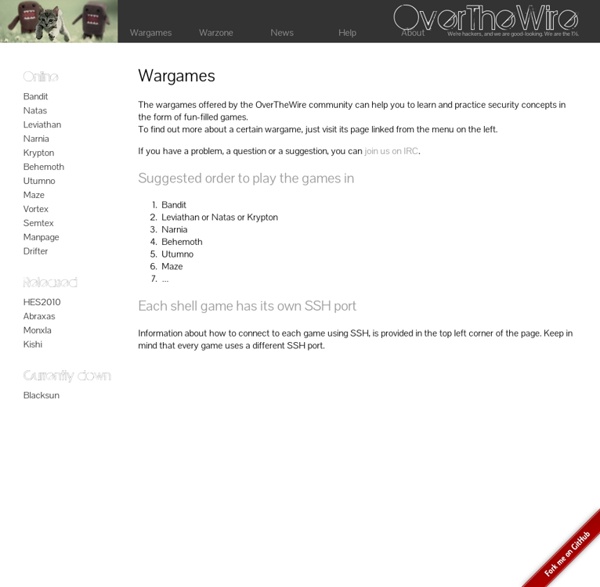 We're hackers, and we are good-looking. We are the 1%. The wargames offered by the OverTheWire community can help you to learn and practice security concepts in the form of fun-filled games. To find out more about a certain wargame, just visit its page linked from the menu on the left. If you have a problem, a question or a suggestion, you can join us on IRC. Suggested order to play the games in Bandit Leviathan or Natas or Krypton Narnia Behemoth Utumno Maze … Each shell game has its own SSH port Information about how to connect to each game using SSH, is provided in the top left corner of the page.

HellBound Hackers Hack.me - Build, Host & Share Vulnerable Web Application Code Hack.me is a FREE, community based project powered by eLearnSecurity. The community allows you to build, host and share vulnerable web application code for educational and research purposes. It aims to be the largest collection of “runnable” vulnerable web applications, code samples and CMS’s online. The platform is available without any restriction to any party interested in Web Application Security: students, universities, researchers, penetration testers and web developers. Features

Reverse Shell Cheat Sheet If you’re lucky enough to find a command execution vulnerability during a penetration test, pretty soon afterwards you’ll probably want an interactive shell. If it’s not possible to add a new account / SSH key / .rhosts file and just log in, your next step is likely to be either trowing back a reverse shell or binding a shell to a TCP port. This page deals with the former. Your options for creating a reverse shell are limited by the scripting languages installed on the target system – though you could probably upload a binary program too if you’re suitably well prepared. The examples shown are tailored to Unix-like systems. Some of the examples below should also work on Windows if you use substitute “/bin/sh -i” with “cmd.exe”. Use arp-scan to find hidden devices in your network The Address Resolution Protocol uses a simple message format containing one address resolution request or response. The size of the ARP message depends on the upper layer and lower layer address sizes, which are given by the type of networking protocol (usually IPv4) in use and the type of hardware or virtual link layer that the upper layer protocol is running on. The message header specifies these types, as well as the size of addresses of each. The message header is completed with the operation code for request (1) and reply (2). The payload of the packet consists of four addresses, the hardware and protocol address of the sender and receiver hosts.

HTTPS in the real world 28 Nov 2018 In cryptography, trust is mathematically provable. Everything else is just faith. When you begin reading any introductory explanation of HTTPS, you are quickly whisked away to an alien planet inhabited by a savage society. So You Want To Be a Pentester? - Jack Hacks While it might seem that being a Hacker for Hire is all fun and games after watching a ton of episodes of Mr. Robot - which it is - it also has its downsides like every other job. Working as a Security Consultant, I get asked a lot of questions on how to break into Penetration Testing, or what skills one must need to achieve such a job.

Free Hotel Wifi with Python and Selenium · Gokberk Yaltirakli Recently I took my annual leave and decided to visit my friend during the holidays. I stayed at a hotel for a few days but to my surprise, the hotel charged money to use their wifi. In $DEITY‘s year 2000 + 18, can you imagine? But they are not so cruel. You see, these generous people let you use the wifi for 20 minutes. 20 whole minutes.

From blind XXE to root-level file read access On a recent bug bounty adventure, I came across an XML endpoint that responded interestingly to attempted XXE exploitation. The endpoint was largely undocumented, and the only reference to it that I could find was an early 2016 post from a distraught developer in difficulties. Below, I will outline the thought process that helped me make sense of what I encountered, and that in the end allowed me to elevate what seemed to be a medium-criticality vulnerability into a critical finding. I will put deliberate emphasis on the various error messages that I encountered in the hope that it can point others in the right direction in the future. Note that I have anonymised all endpoints and other identifiable information, as the vulnerability was reported as part of a private disclosure program, and the affected company does not want any information regarding their environment or this finding to be published. What am I looking at?