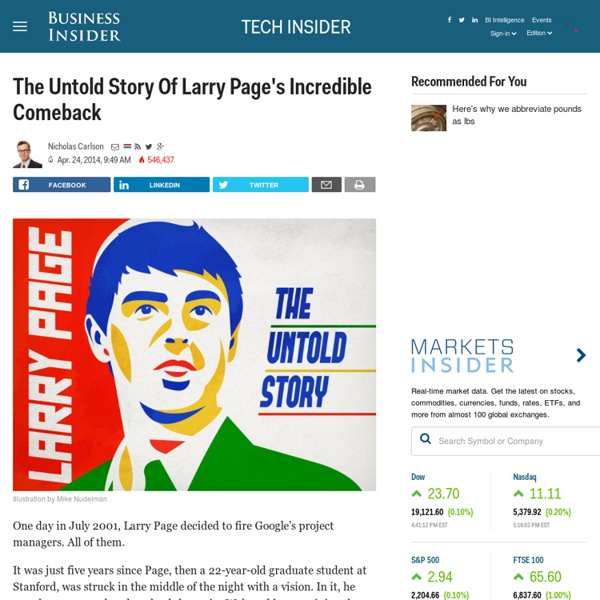 Sha Hwang, the Designer Hired to Make Obamacare Beautiful A little before midnight on Christmas Eve, Sha Hwang’s phone rang. It was Jini Kim, an ex-Google (GOOG) executive he’d met two years earlier. She’d joined President Obama’s “tech surge,” the frantic effort to fix healthcare.gov. What New Ideas Does Google Have Brewing At Motorola? I was texting last weekend while stopped at a red light on my bicycle, and as the light turned green, I carelessly put the phone in my pocket and pedaled off. Next thing I knew, my Android phone, a year-old Samsung Galaxy Nexus, had hit the pavement. The phone functions, but now the screen is webbed with cracks (ok, I may have deserved that).

Business Models for 2014 Perhaps the greatest continuing disconnect between technologists and normals is the value ascribed to software. As Marc Andreesen famously declared, “Software is eating the world,” and while that is absolutely true, software, especially in the consumer space, is not eating value, at least not directly. In fact, if 2013 taught us anything, it’s that the value consumers place on software is lower than ever. This phenomenon was seen most clearly in the app store economy, where paid downloads plummeted in popularity. Multiple developers have written about how increasingly difficult it is to make money on the store, and despair about the relentless march to free (with in-app purchase).

Google’s New Company Calico To Try to Cheat Death A joke about Silicon Valley is that entrepreneurs always seem to focus on the problems facing people of their own age. That’s why young programmers have endless ideas for websites that will tell them what bar to hang out in. Then, in middle age and with marriage, it’s onto inventing fertility apps (see “Three Questions for Max Levchin About His New Startup”). Eventually, as your hair goes gray, you have to fix death itself. Today, Time magazine broke the news that Google and its CEO Larry Page are funding a company that will try to extend human lifespan and solve the diseases of aging. The weekly’s next newsstand cover asks, in huge letters, “Can Google Solve Death?”

A product management view of CES 2014 I love the Consumer Electronics Show. Maybe I’m numb from decades of attending it. Maybe I’m just too much of a fan of watching stuff get made. Maybe I just like long lines and the potential for airborne illness. Really what I love is the technology industry and that every year we get together and demo new products, share works in progress, and take chances on offering products people don’t yet (or ever) know they want.

The Secret History of the Hashtag, Slash, and Interrobang Glyphs are the hidden heroes of the typography world. You might not pay them much attention, but they’re undeniably important. Glyphs—and by glyphs we’re referring specifically to those little typographic symbols that include punctuation—give intention and structure to a sentence; they help you interpret a piece of text. They tell you when to pause, when to question, when to feel enthused. Why Steve Jobs Never Listened to His Customers It's really hard to design products by focus groups. A lot of times, people don't know what they want until you show it to them."— Steve Jobs This quote became legendary as one of the most famous opinions from a highly opinionated man.

After Today, Google Officially Becomes Alphabet Google has reorganized itself into multiple companies, separating its core Internet business from several of its most ambitious projects while continuing to run all of these operations under a new umbrella company called Alphabet. “What is Alphabet? Alphabet is mostly a collection of companies. The largest of which, of course, is Google,” Google co-founder Larry Page said in a blog post this afternoon. “This newer Google is a bit slimmed down, with the companies that are pretty far afield of our main Internet products contained in Alphabet instead.” Here’s what HealthCare.gov and the F-35 have in common If you think of the most high-profile federal procurement debacles in recent memory, two things come to mind: the wildly over-budget F-35 Joint Strike Fighter program and now HealthCare.gov. The differences between them, of course, are obvious. The health-care Web site's cost is microscopic compared with the scale of the F-35, which has already cost $87.5 billion and is expected to need another $12.6 billion annually until 2037. You could pay for the entire HealthCare.gov procurement process with the cost of two planes.

Sorry Search, YouTube Is More Important to Google Than Ever Alphabet was established to help Google develop its ideas beyond search into areas as diverse as self-driving cars, medical technology, and high-speed internet connections. But it’s YouTube, still a part of Google prime, that the company is touting as one of its first big successes outside of search. During Alphabet’s first quarterly earnings call yesterday, Google CEO Sundar Pichai gushed about the video streaming service. YouTube now delivers hundreds of millions of hours of video per day, and much of that is happening on mobile devices. And it’s not just people watching cat videos.

Obama's Broken Promise of Better Government Through Technology Pete Souza/Obama Transition Office/Getty ImagesBehind this week's cover In the 2008 election, President Obama’s advisers talked of their boss’s belief that it was time for an “iPod government.” Obama, a technology addict who tools around on his iPad before going to sleep and who fought the U.S. Secret Service bureaucracy for the right to carry a smartphone, would be the first president truly at home in the Digital Age. That put him, he thought, in a unique position to pull the federal government into the Digital Age, too.

Related:
Related:  Project Management   -  Wired   -  Wired!   -  Three Trends That Will Shape the Future of Curriculum | MindShift   -  What’s the Difference Between “Using Technology” and “Technology Integration”? | TeachBytes   -  The 4 Stages Of The Integration Of Technology In Learning   -  10 Video Projects Every Teacher Should Try   -  10 Creative Ways To Use Google Tools To Maximize Learning | Edudemic