This Guy Is Known For Taking Crazy Drawing Requests. He Delivers In The Most Amazing Ways Possible 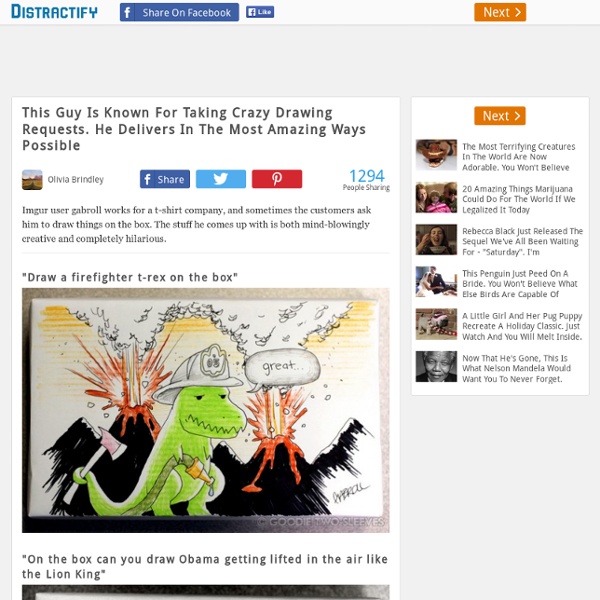 Breathtaking Surreal Self Portraits by 20-Year-Old Rachel Baran 20 years old U.S.-based photographer Rachel Baran creates powerful surreal and conceptual self portraits … Rachel Baran The Average Female Faces Around the World To determine the average female face from each country, scientists from Face Research have blended hundreds of photographs of women faces… FaceResearch Unbelivable Zaria Forman Artworks The inspiration for Zaria’s drawings began in early childhood when she traveled with her family throughout several of the world’s most remote landscapes, which were the subject of her mother’s fine art photography. Her work exhibits extensively in galleries and venues throughout the United States and overseas. In addition to exhibitions, recent projects include a series of drawings that served as the set design for the classic ballet Giselle, which premiered in October 2012 at the Grand Theatre of Geneva, Switzerland. Ten of her drawings were also used in the set design for House of Cards, a Netflix TV series directed by David Fincher and starring Kevin Spacey. In August 2012 she led Chasing the Light, an expedition sailing up the NW coast of Greenland, retracing the 1869 journey of American painter William Bradford and documenting the rapidly changing arctic landscape.

Man Tries to Hug a Wild Lion, You Won't Believe What Happens Next! When you hear of someone trying to hug a wild lion, you immediately think you know exactly what’s about to happen. But trust me when i say, you will not see this coming. Kevin Richardson is a South African Zoologist who over the years has conducted extensive research on the native animals of the African plains. Strapped with a jeep full of GoPro cameras, Kevin takes his crew as close as they can get to these wild creatures, without letting the rest of them get out of the car. As you hear him call for these animals and then watch them charge after him, you immediately think to yourself ” Yup! Kevin is able to use his unique relationship with these animals to capture people’s attention and draw awareness to the problems facing the wild life in Africa. When looking for reasons why these animals numbers are dropping Richardson has found a common thread. Question of the Day: If you could hug any animal on the planet, what would it be? Let us know in the comments below!

Oleg Shuplyak's Optical Illusion Paintings Sometimes there’s more to the eye than you initially perceive. Apparently just some amazing oil paintings, the works of Ukrainian artist Oleg Shuplyak’s hide a surreal world once you take a step back and watch more closely. Through carefully placed objects, characters, coloring and shadows, there is a second image in the painting which creates an optical illusion. The second image is so easily observable in some paintings, that you can miss the first one consisting of harmless landscape or characters in different settings. You have to observe the painting more closely to actually see the initial setting and not concentrate on the faces. Personally, I can’t decide on which of the two planes to admire more. Enjoy some selections of the artists’ works below and get captivated by the illusions. Photo credits: Oleg Shuplyak

Caricature Map of Europe 1914 The Clanker Powers: Germany is a massive military machine with weapons aimed outwards to all surrounding countries. It points threateningly at Britain, not so much as a sign of direct aggression, but more as an indicator that it was now Germany’s turn to start a grand global Empire to challenge the world’s current one. Austria Hungary is an aggressive armoured giant, teetering on shoddy foundations. The Ottoman empire is a teetering automaton, collapsing under the weight of a paranoid and ungainly spying network that gazes at Europe through many lenses and spy glasses. The Swiss watch ticks away the time, comfortable to wait it all out. The Darwinist Powers: Britain is an militaristic lion with a Roman Imperial italic-type helmet. France’s elephant beast (wearing the French kepi they started the war with before adapting their firefighter helmets) is influenced by the Elephantine Collossus built for the Universal Exhibition of 1889 in Paris (later it ended up going to the Moulin Rouge.)