Scientists Discover a Jewel at the Heart of Quantum Physics 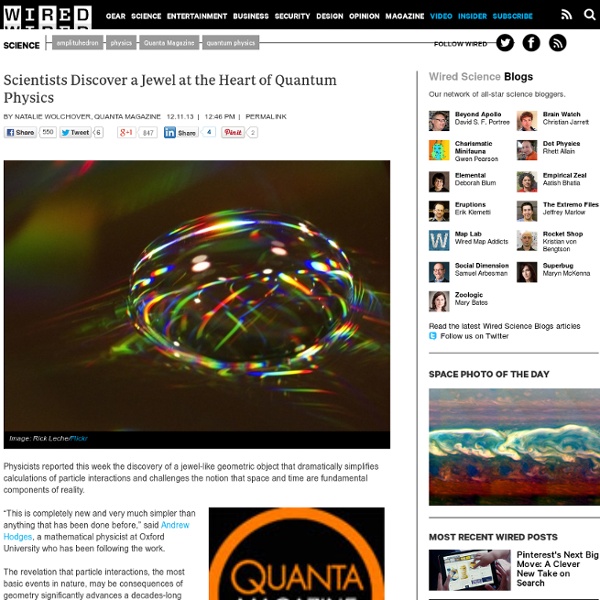 Physicists reported this week the discovery of a jewel-like geometric object that dramatically simplifies calculations of particle interactions and challenges the notion that space and time are fundamental components of reality. “This is completely new and very much simpler than anything that has been done before,” said Andrew Hodges, a mathematical physicist at Oxford University who has been following the work. The revelation that particle interactions, the most basic events in nature, may be consequences of geometry significantly advances a decades-long effort to reformulate quantum field theory, the body of laws describing elementary particles and their interactions. Interactions that were previously calculated with mathematical formulas thousands of terms long can now be described by computing the volume of the corresponding jewel-like “amplituhedron,” which yields an equivalent one-term expression. The amplituhedron itself does not describe gravity. Related:  Quantum Shenanigans • Science

Quantum Effects in Biology | Controlled Quantum Dynamics Group Biologists do not take a quantum physics course during their studies because so far they were able to make sense of biological phenomena without using the counterintuitive laws of physics that govern the atomic scale. However, in recent years progress in experimental technology has revealed that quantum phenomena are relevant for fundamental biological processes such as photosynthesis, magneto-reception and olfaction. We have helped to initiate the development of this research field and are now working to discover how nature is harnessing quantum dynamics to optimize biological function. S.F. Environment assisted quantum bio-dynamics: It is remarkable that quantum phenomena can play a role in warm, wet and noisy biological systems. Environment assisted quantum bio-dynamics: Biological environments are not creating white noise but do actually possess considerable structure. J.M.

Artificial gravity Proposed Nautilus-X International space station centrifuge demo Artificial gravity is the varying (increase or decrease) of apparent gravity (g-force) via artificial means, particularly in space, but also on Earth. It can be practically achieved by the use of different forces, particularly the centripetal force and linear acceleration. The creation of artificial gravity is considered desirable for long-term space travel or habitation, for ease of mobility, for in-space fluid management, and to avoid the adverse long-term health effects of weightlessness. A number of methods for generating artificial gravity have been proposed for many years, as well as an even larger number of sci-fi approaches using both real and fictitious forces. Amusement parks make frequent use of centripetal force and linear acceleration, through roller coasters and other rides. Requirement for gravity[edit] Without g-force, space adaptation syndrome occurs in some humans and animals. Rotation[edit] Mass[edit]

Hyper-priming in cannabis users: a naturalist... [Psychiatry Res. 2010 Researchers at Brown University shattered an electron wave function A team of physicists based at Brown University has succeeded in shattering a quantum wave function. That near-mythical representation of indeterminate reality, in which an unmeasured particle is able to occupy many states simultaneously, can be dissected into many parts. This dissection, which is described this week in the Journal of Low Temperature Physics, has the potential to turn how we view the quantum world on its head. When we say some element of the quantum world occupies many states at once, what’s really being referred to is the element’s wave function. If a particle could be in position (x,y,z) in three-dimensional space, there are probabilities that it could specifically be at (x1,y1,z1) or (x2,y2,z2) and so forth, and this is represented in the wave function, which is all of these possibilities added together. Visually, we might imagine a particle in its undisturbed state looking more like a cloud than a point in space. Maris is chasing a fairly old mystery with this work.

New Study on Safety of Eating Seafood During Pregnancy | BabyMed.com Q: Is it safe to eat sea food during pregnancy? A: Conflicting nutrition advice can be confusing, particularly for pregnant women, who often feel that they must become nutritional experts overnight as they start to eat for two. In the United States pregnant and nursing women, as well as those who want to conceive, are advised to avoid certain types of seafood and to limit consumption of other varieties as a way to reduce potential ill effects from mercury and other contaminants. But a new report from a huge, ongoing research project in the United Kingdom suggests that if women skimp on seafood during pregnancy it may be detrimental to their children. The latest findings, published in 2007 in the journal the Lancet, confirm that you have to eat fish because there's so much more benefit than risk. Indeed, skimping on seafood during pregnancy appears to produce the very problems that scientists feared could occur from eating too much seafood containing mercury.

When Parallel Worlds Collide . . . Quantum Mechanics Is Born Parallel universes – worlds where the dinosaur-killing asteroid never hit, or where Australia was colonised by the Portuguese – are a staple of science fiction. But are they real? In a radical paper published this week in Physical Review X, we (Dr Michael Hall and I from Griffith University and Dr Dirk-André Deckert from the University of California) propose not only that parallel universes are real, but that they are not quite parallel – they can “collide”. In our theory, the interaction between nearby worlds is the source of all of the bizarre features of quantum mechanics that are revealed by experiment. Many worlds in existing interpretations The existence of parallel worlds in quantum mechanics is not a new idea in itself – they are a feature of one of the leading interpretations of quantum mechanics, the 1957 “many worlds interpretation” (MWI). First, its formalism is extremely remote from everyday experience. Heads or tails? Many interacting worlds Implications and applications

Weight Training During Pregnancy - Exercises For Pregnant Women Physicians and personal trainers in the past have been cautious to encourage strength training or resistance training for pregnant women. This is due to the physiological changes taking place within the body and the concern of complications to the mother and or fetus during pregnancy. Promoting a healthier pregnancy and labor for mothers and fetuses is a topic that has had many nation wide discussions and debates. The "marathon of labor" may want to be considered prior to conception when a woman would be free of the natural limitations of pregnancy. One issue dealing with the unborn child is the danger of umbilical cord entanglement. Musculoskeletal changes in a woman's body during pregnancy are related to weight changes in the uterus, fetus, breasts as well as the most crucial, an increase in lumbar lordosis (swayback), which causes a shift in a woman's center of gravity. Women should avoid any exercise that can cause a serious fall as well as contact sports and scuba diving.

Long-term meditators self-induce high-amplitude gamma synchrony during mental practice Proceedings of the National Academy of Sciences of the United States of Americawww.pnas.org Author Affiliations Communicated by Burton H. Singer, Princeton University, Princeton, NJ, October 6, 2004 (received for review August 26, 2004) Abstract Practitioners understand “meditation,” or mental training, to be a process of familiarization with one's own mental life leading to long-lasting changes in cognition and emotion. Little is known about the process of meditation and its impact on the brain (1, 2). Methods The subjects were eight long-term Buddhist practitioners (mean age, 49 ± 15 years) and 10 healthy student volunteers (mean age, 21 ± 1.5 years). We first collected an initial electroencephalogram (EEG) baseline consisting of four 60-s blocks of ongoing activity with a balanced random ordering of eyes open or closed for each block. Meditative Instruction. EEG Recordings and Protocol. Bad channels were replaced by using spherical spline interpolation (12). Spectral Analysis. Fig. 3.