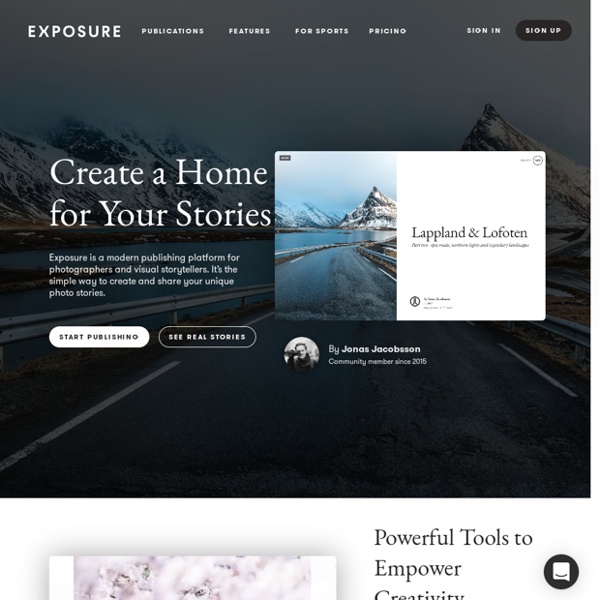 Exposure is for photographers who want a more meaningful way to publish their work. Instead of a boring slideshow or a single photo sitting alone, we help you tell a great story with your photography front and center. Too many services don’t worry about making money until it’s too late, but we’re in this for the long haul. You can make three Exposure posts for free, but become a paid subscriber to get premium features like unlimited posting, custom domains, password-protected posts, and more. Three post limitRich text editingExposure profileNo credit card required Free

Rare and Amazing Historical Photos September 1933 - Adolf Hitler breaks ground on his ambitious plans to link all major German cities with highways. This ceremony kicked off construction of the Frankfurt-am-Maine - Darmstadt/Mannheim highway. Betty White at home with her dog in 1952 An iceberg photographed in 1912 bearing an unmistakable mark of black and red paint.

Free Software for Writers Dozens of software applications are available and marketed to writers, yet many of these programs can be both expensive and difficult to use. While standard word processors serve the needs of many writers, some writers require more adaptable and agile solutions. For writers unwilling or unable to spend hundreds of dollars to invest in the multitude of purchasable programs, there is a plethora of free, user-friendly programs available for download. Q10 is a free, highly customizable, full screen word processor.

ExpressoWiFi 登录 登录 忘记密码？ Comments are closed, but trackbacks and pingbacks are open. 有关Expressowifi rare historical photos rare historical photos Rare Historical Photos Pt. 10 [21 Pics] Jan 21 2014 Another photo roundup of the popular historical series of posts that we do. BBC Academy - Fast Train North: storylining and creating characters This is a report from Fast Train North, the free training event for freelancers from the BBC Academy and Creative Skillset. It took place on 20 November at MediaCityUK in Salford, where more than 300 people attended 278 training sessions, masterclasses and one-to-ones with high profile industry figures and experts. For more on the day, see its Flickr page and the BBC College of Production website. The idea of having full control over the destinies of the characters on Coronation Street, EastEnders and the rest is may a soap fan's dream. But what is life really like for the people who create the storylines for some of the UK’s biggest soaps, and what does it take to get and keep such a coveted role?

ExpressoWiFi Accedi Accedi Hai perso la password? 22 Breathtaking Wildlife Pictures Of Beautiful Foxes EmailEmail The fox is well-known for its overwhelming beauty, intelligence, and cunning. Red foxes (Vulpes vulpes) are known best by most of us as they are the most widely spread – their habitats include forests, grasslands, mountains, and deserts. However, there are quite a few of different fox species (all of which belong to the Canidae family) that are set apart by their appearance and habitat. Storehouse Storytelling App Gets Embeds And Improved Community Building Tools Storehouse, an app for iPad that functions as a story creation tool with images, video and text, is getting a nice update today. The update brings the ability to embed stories in blogs and on the web, as well as comments and an easy way to find Storehouse users on Twitter and Facebook. I spoke to co-founder Mark Kawano about the new release and some of the rationale for introducing embeds as the first big new feature — and why it took so long to add any social elements. The embeds, which work like the below, are gorgeous. Kawano says that they spent a lot of time thinking about how to present stories in an enticing way, while still honoring flexible layouts.