The Spice That Prevents Fluoride From Destroying Your Brain 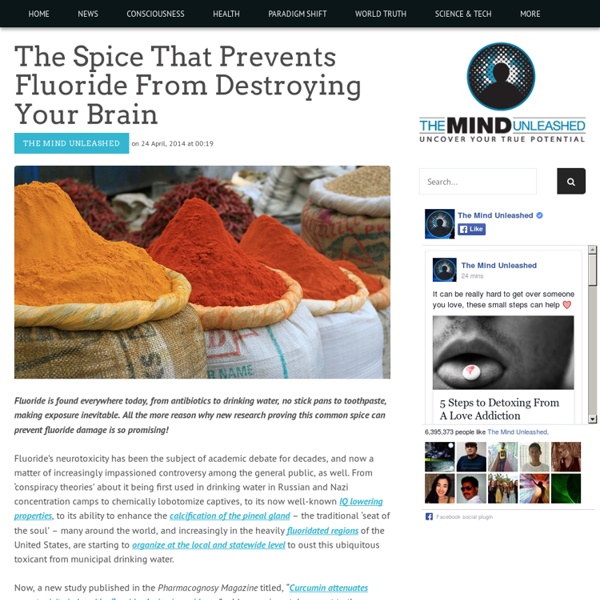 Fluoride is found everywhere today, from antibiotics to drinking water, no stick pans to toothpaste, making exposure inevitable. All the more reason why new research proving this common spice can prevent fluoride damage is so promising! Fluoride’s neurotoxicity has been the subject of academic debate for decades, and now a matter of increasingly impassioned controversy among the general public, as well. Now, a new study published in the Pharmacognosy Magazine titled, “Curcumin attenuates neurotoxicity induced by fluoride: An in vivo evidence,” adds experimental support to the suspicion that fluoride is indeed a brain-damaging substance, also revealing that a natural spice-derived protective agent against the various health effects associated with this compound is available. The study was authored by researchers from the Department of Zoology, University College of Science, M.L. The study concluded, Discussion [i] Bhatnagar M, Rao P, Saxena A, Bhatnagar R, Meena P, Barbar S. Related:  Food With Health Benefits • science and beyond • Medical Science

Stop Buying Garlic. Here’s How To Grow An Endless Supply of Garlic Right at Home - Good Morning Center There is no doubt that garlic is a common ingredient in all national cuisines around the world, due to the fact that it is highly versatile and healthy. Despite its countless health benefits, its unique taste and aroma enrich all kinds of dishes. Garlic is rich in potent medicinal properties as it is abundant in essential nutrients, and low in calories, containing only 42 calories per serving. Yet, you will benefit from it the most if you consume organic garlic, and grow it at home instead of buying it, as it may have been grown using various dangerous chemicals. First of all, let us repeat its most important health benefits: Promotes heart health The consumption of garlic lowers the risk of heart diseases and aids the body to process cholesterol easily. Strengthens the Immune System Garlic effectively strengthens the immune system and fights sickness, like the common cold. Cancer Prevention This is how to grow garlic at home: Sources:shareably.netfamilylifegoals.com

Human Cells have Electric Fields as Powerful as Lighting Bolts -A Galaxy Insight Using newly developed voltage-sensitive nanoparticles, researchers have found that the previously unknown electric fields inside of cells are as strong, or stronger, as those produced in lightning bolts. Previously, it has only been possible to measure electric fields across cell membranes, not within the main bulk of cells, so scientists didn't even know cells had an internal electric field. This discovery is a surprising twist for cell researchers. University of Michigan researchers led by chemistry professor Raoul Kopelman encapsulated voltage-sensitive dyes in polymer spheres just 30 nanometers in diameter. "They have developed a tool that allows you to look at cellular changes on a very local level," said Piotr Grodzinski, director of the National Cancer Institute Alliance for Nanotechnology in Cancer in Technology Review. Kopelman has developed encapsulated voltage-sensitive dyes that aren't hydrophobic and can operate anywhere in the cell, rather than just in membranes.

Take Watermelon Seeds, Boil Them And Drink The Tea! The Results Will Shock You... We all like watermelon. And we all hate the seeds that interrupt us from enjoying the delicious sweetness. However, these tiny seeds are actually packed with POWERFUL nutritional value so we can make something really special out of them! We can make a ‘magical’ recipe with boiling them (admit it, you’ve never thought of boiling them) Here is how to prepare the magic recipe: Take 20-30 watermelon seeds, grind them and boil them for 15 minutes in 2 liters of water. Repeat the procedure for several weeks, but it is mandatory to pause every third day. There are 20 INCREDIBLE health benefits of watermelon seeds: 1. 2. 3. 4. 5. 6. 7. 8. 9. 10. 11. 12. 13. 14. 15. 16. 17. 18. 19. 20. Source:

Kirlian Energy Fields Radiation Fields - Energy Fields - Reflected Zones The human energy field is thought to contain information that relates to all the activity going on within and around the person. The human aura or light body is invisible because our eyes only respond to a band of wavelengths called the visible spectrum and as the aura lies outside of this most people are unable to see it with the naked eye. However throughout history many seers and sensitive’s have claimed to see this aura surrounding people. From their accounts it has been reported that disturbances or dis-ease within the individual shows itself as distortions or anomalies within the aura. Slowly we are beginning to accept that spirit or vital energy is inherent in matter and that without spirit matter cannot exist. Each part of the body contains information about the whole. Kirlian electrographs are typically taken of the hands. Dr. in the body.

6 Vegetables You Can Grow Again. And Again. And Again. And Again. No matter what season you find yourself in or headed towards, a jumpstart in growing time is always useful to keep your organic vegetable garden producing (that’s one reason transplants are so commonly utilized). Melissa Melton and Aaron Dykes demonstrate how easy it can be to regrow food scraps from their leftover organic produce. Throw whatever you decide not to regrow into your compost bin, and keep the organic matter recycling back into a healthy and productive soil – Learn more with this important book on soil health, compost, mulching and organic gardening in Texas (or anywhere). Kitchen Scraps You Can Regrow: 1. Spring Onions are a wonderful choice because they are so easy, grow back in full in about a week, spruce up window space and add flavor to any number of dishes and soups. 2. Celery can be regrown after the useful and nutritious stalks are juiced (our favorite), tossed into a salad or chopped into a stirfry. 3. Editors Note: Check out this Little Girl's Experiment on Budnip 4.

Treat THESE 15 Ailments SIMPLY By Eating These 15 Foods... Nature has a cure for anything. This is an old wisdom that many old people still live by. The food that we take from Nature in form of Plants, Fruits, Veggies and many different forms like algae and mushrooms, all contain healing benefits. This is true because everything that Nature produces has a tendency to restore balance and harmony. And we are a part of Nature. That’s why Nature can give us the best remedies; because, unlike modern medicine which is known to do more harm to our balance in order to heal one ailment, Nature restores balance in order for the ailment to be healed. Each food has a specific healing attributes and it’s best used for a certain thing, while other food for something else. Here are a some of the foods that can help you restore your health: