'Uncrackable' codes set for step up 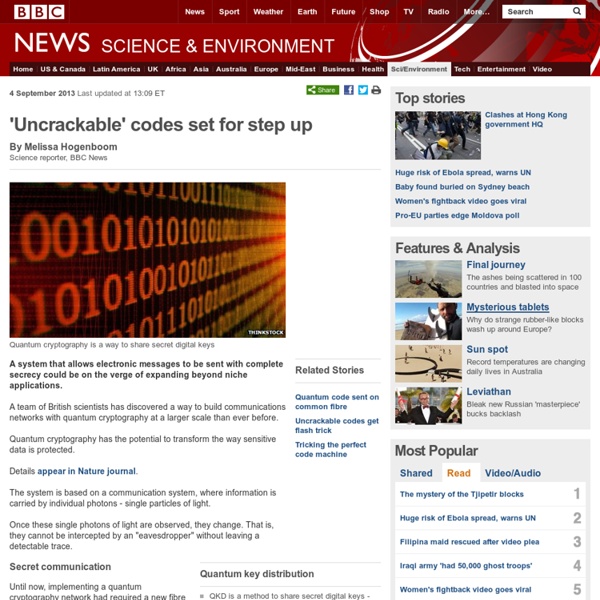 4 September 2013Last updated at 13:09 ET By Melissa Hogenboom Science reporter, BBC News Quantum cryptography is a way to share secret digital keys A system that allows electronic messages to be sent with complete secrecy could be on the verge of expanding beyond niche applications. A team of British scientists has discovered a way to build communications networks with quantum cryptography at a larger scale than ever before. Quantum cryptography has the potential to transform the way sensitive data is protected. Details appear in Nature journal. The system is based on a communication system, where information is carried by individual photons - single particles of light. Once these single photons of light are observed, they change. Continue reading the main story Quantum key distribution Secret communication The team says they have now extended the way to send uncrackable codes - referred to as "quantum key distribution" (QKD) - beyond very niche applications. Mobile cryptography

Find Your Own Private Internet With Freenet PC World – by Alex Wawro Anonymous peer-to-peer communication on the Internet isn’t just a handy tool for privacy enthusiasts; it’s critical for preserving free speech in the digital world. Anonymous file-sharing services like BitTorrent are legion, but their utility is limited—you can share only files—and their reputations are unfairly tarnished by people who use them to share media illegally. Long-distance 3D laser camera unveiled by Edinburgh team 9 April 2013Last updated at 07:43 ET The camera can detect the mannequin (top set of images), but not real skin (bottom set) A camera able to create 3D images up to one kilometre (0.62 miles) away has been developed by a team in Edinburgh. Physicists at Heriot-Watt University developed a technique which uses lasers to scan almost any object.

12 Things That The Mainstream Media Is Being Strangely Quiet About Right Now As the mainstream media continues to be obsessed with Anthony Weiner and his bizarre adventures on Twitter, much more serious events are happening around the world that are getting very little attention. In America today, if the mainstream media does not cover something it is almost as if it never happened. Right now, the worst nuclear disaster in human history continues to unfold in Japan , U.S. nuclear facilities are being threatened by flood waters, the U.S. military is bombing Yemen, gigantic cracks in the earth are appearing all over the globe and the largest wildfire in Arizona history is causing immense devastation. But Anthony Weiner, Bristol Palin and Miss USA are what the mainstream media want to tell us about and most Americans are buying it.

Largest Cyber-Attack in History Hits Pro-Hong Kong Protest Websites Websites supporting the pro-democracy protesters in Hong Kong have been hit with a series of DDoS attacks which have been described as the largest in history.(Bobby Yip/Reuters) A series of cyber attacks against websites supporting Occupy Central protestors in Hong Kong have been described as the biggest cyber attacks ever recorded. Over the last few months two independent news websites which have been covering the Occupy Central protests which began in September following the announcement of a decision by China's Standing Committee of the National People's Congress on proposed electoral reform. Thermal invisibility cloak in first demonstration 10 May 2013Last updated at 21:34 ET A flat region about 5cm wide at the "cloak's" centre was invisible to heat's passage Researchers have built and tested a form of invisibility cloak that can hide objects from heat.

Amazing low-tech harvester collects water from even the driest of air Even in places where there’s a severe lack of water, there’s one thing every place has. Air. And even in the most arid of climes, there’s moisture in the air, even if it’s not enough to be felt on your skin. 3 Internet of Things Security Nuances You May Not Have Considered Over the past 18 months, I’ve been in a variety of situations where I had the opportunity to discuss the Internet of Things (IoT) with various industry professionals, developers and journalists. It intrigued me to realize that many of my viewpoints often differed from others discussing the topic in articles or event presentations. With that in mind, I wanted to share three topics that I find are discussed less frequently. Regardless, these topics should be an important aspect of the conversations we need to be having on this rapidly growing subject. 1. Crowd funding and IoT Go Hand-in-Hand

Three steps to properly protect your personal data With groups like Anonymous actively looking to embarrass your company, laptops thefts occurring every second, and the recent poor US District Court ruling on fifth amendment password protection rights, it is time you actually encrypt your data properly. Your Windows login password is not encrypting your computer (surprise!). Full-disk encryption (used by very few people) is a good step, but by itself it still will not completely protect your data from prying eyes, overzealous governments, or your own mistake of leaving your company's crown jewels at the local coffee shop.

The wireless network with a mile-wide range that the “internet of things” could be built on Robotics engineer Taylor Alexander needed to lift a nuclear cooling tower off its foundation using 19 high-strength steel cables, and the Android app that was supposed to accomplish it, for which he’d just paid a developer $20,000, was essentially worthless. Undaunted and on deadline—the tower needed a new foundation, and delays meant millions of dollars in losses—he re-wrote the app himself. That’s when he discovered just how hard it is to connect to sensors via the standard long-distance industrial wireless protocol, known as Zigbee.

The Complete Guide to Not Giving a Fuck Ok, I have a confession to make. I have spent almost my whole life– 31 years– caring far too much about offending people, worrying if I’m cool enough for them, or asking myself if they are judging me. I can’t take it anymore. It’s stupid, and it’s not good for my well being. It has made me a punching bag– a flighty, nervous wuss. But worse than that, it has made me someone who doesn’t take a stand for anything. The top 10 data breaches of the past 12 months Most Internet users are accustomed to changing their online passwords regularly. They limit their shopping to sites with a trusted security certificate, and use companies like PayPal for safe transactions. But the last year has demonstrated that even the most cautious user is vulnerable to data breaches that can lead to fraud and identity theft. Luckily, timely disclosure about these breaches is becoming more standard for the organizations affected, enabling users to act quickly to change their passwords and check their credit reports.