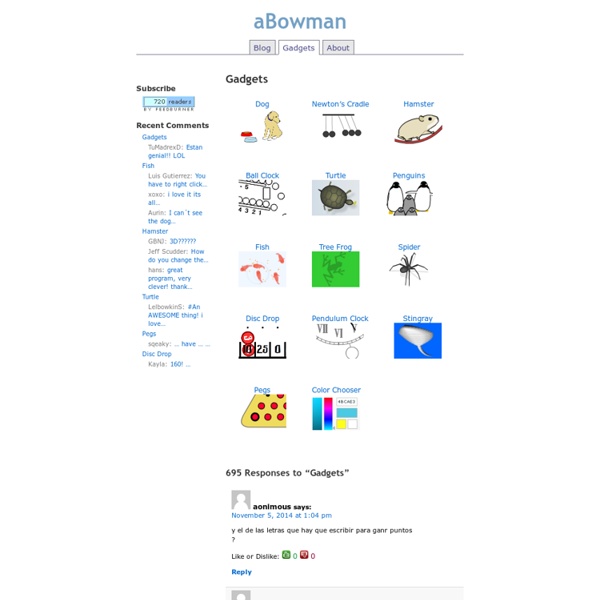 lab Sticky Thing Touch Sticky Thing iPhone Experiments Space Noodles Liquid Particles 3D The particles trapped in a wormhole discoball. Takes some practice to control. Launch06-2010 Comparison Technical study, comparing rendering performance. Overview04-2010 Liquid Particles Meeting God You were on your way home when you died. It was a car accident. Nothing particularly remarkable, but fatal nonetheless. You left behind a wife and two children.

free online paint program Flame Painter Gallery Flame Painter is a unique paint program, it belongs to my 'I am an Artist' experimental project. I think with tools which inspires you, everyone can be an artist. You can try it here, change different brush settings and paint your own flame paintings. When you change the background from black to white, the palette changes from additive to subtractive and the feeling of the painting is very different. It's not easy to explain all brush parameters, so I leave this for your experimentation.

Minecraft Slime Finder Background Apart from spawning in swamps (added in 1.4), slimes can only spawn in every 10th chunk in average ("Slime Chunks"). Chunks are 16x16 blocks wide (x and z axis) and 256 blocks high (y axis). Slime Chunks are predetermined by your savegame seed, and are always the same for a specific seed, just like the generated terrain. Does The Dog Die? #TubeClash - The Movie There are "wookies" in the movie that look little like the ones in Star Wars, but are more like cute little fuzzballs. One of them is killed by a character by being cut in half, being mistaken for a monster. It however comes back to life as a zombie and appears as such for the rest of the movie and its sequels. So despite being killed, it is undead for most of its on-screen time and still has its consciousness. There are also other zombie wookies, but we don't see them die. 10 Cloverfield Lane Two dead pigs, named Frank and Mildred, are seen briefly (they are never shown alive).

FishIE Tank fish 1024 x 1002 window size Thanks for checking out this site. This demo uses the canvas element to draw fish swimming in a fish tank. The FPS count tells you how many frames per second the browser is able to draw. Walaber Unreleased Ideas Here are a couple quick videos of things I was working on, but never turned into something worth releasing: This was a first attempt at taking the... JellyPhysics (library) This is the released source code to my “JellyPhysics” soft-body physics system, as used in JellyCar. The system is designed around objects made up of closed shapes... 10 Terrifying Planets You Don't Want To Visit Space Space exploration is a grand adventure. Its mystery has always captivated us and the inevitable discoveries to come will add to the many cosmological insights we already have. But let this list serve as a warning for any weary inter-solar travelers.

17 Web Toys for Your Procrastination Pleasure Sometimes you need to take a break from work and just veg out by doing something mindless and pleasant. TV or a game of solitaire is good for that, but both require a set time commitment. There are hundreds of alternatives on the internet in the form of web toys. These are sites that offer strange visuals, often interactive visuals, that require no real mental effort but might bring a smile to your face for a while. 1. Spider Artist Captures Pizzas Hanging Out in Unusual Places Artist and photographer Jonpaul Douglass cannot be accused of being boring or lacking in humor. In his fantastic series, Pizzas in the Wild, we see pizzas appearing in the most unusual places. Pizza hubcaps adorn cars.