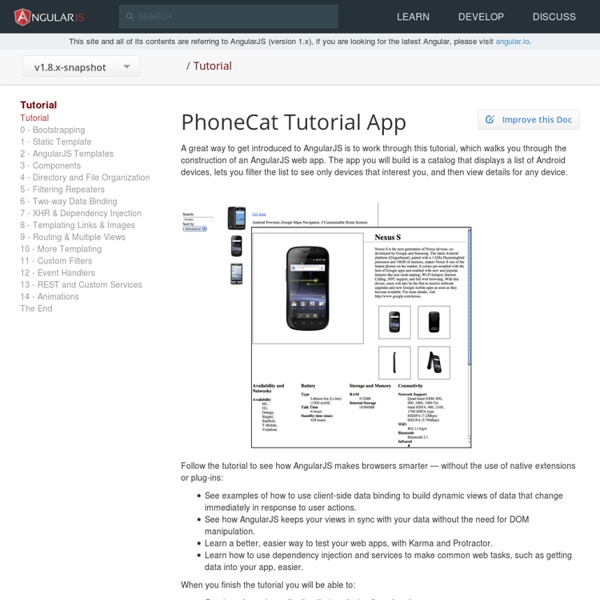 Loading... A great way to get introduced to AngularJS is to work through this tutorial, which walks you through the construction of an AngularJS web app. The app you will build is a catalog that displays a list of Android devices, lets you filter the list to see only devices that interest you, and then view details for any device. Follow the tutorial to see how AngularJS makes browsers smarter — without the use of native extensions or plug-ins: See examples of how to use client-side data binding to build dynamic views of data that change immediately in response to user actions.See how AngularJS keeps your views in sync with your data without the need for DOM manipulation.Learn a better, easier way to test your web apps, with Karma and Protractor.Learn how to use dependency injection and services to make common web tasks, such as getting data into your app, easier. When you finish the tutorial you will be able to: Install Git Download angular-phonecat git clone --depth=16 cd angular-phonecat

Why does Angular.js rock? Let’s see if we can discover why :) Angular.js is a MV* (Model – View – Whatever) Javascript framework which is maintained by Google which excels in the creation of single-page-applications or even for adding some “magic” to our classic web applications. I could spend all the day writing about why you should try Angular.js in your new project, but I feel that it would be better if we see it in action. Data binding and scopes The first question that usually comes to mind is: Does it support data binding? Let’s see an example of Angular.js’ way of data binding: E2E Testing Loading... Note: In the past, end-to-end testing could be done with a deprecated tool called AngularJS Scenario Runner. That tool is now in maintenance mode.

How To Use ngShow and ngHide Today we’ll be looking at how we can use Angular’s ngShow and ngHide directives to do exactly what the directives sound like they do, show and hide! What They Do ngShow and ngHide allow us to display or hide different elements. This helps when creating Angular apps since our single page applications will most likely have many moving parts that come and go as the state of our application changes. The great part about these directives is that we don’t have to do any of the showing or hiding ourselves with CSS or JavaScript. Cookies vs Tokens. Getting auth right with Angular.JS Introduction There are basically two different ways of implementing server side authentication for apps with a frontend and an API: The most adopted one, is Cookie-Based Authentication (you can find an example here) that uses server side cookies to authenticate the user on every request.A newer approach, Token-Based Authentication, relies on a signed token that is sent to the server on each request. Token based vs. Cookie based

Example Viewer Example 1 - Starter HTML page with a text input Example 2 - Added keyup event listener on textInput. Example 3 - Extracting text from the text input as it changes. Example 4 - Updating a span when input text changes using the DOM API. Understanding Dependency Injection · angular/angular.js Wiki Dependency injection in AngularJS is supremely useful, and the key to making easily testable components. This article explains how Angular's dependency injection system works. The Provider ($provide) The $provide service is responsible for telling Angular how to create new injectable things; these things are called services. Services are defined by things called providers, which is what you're creating when you use $provide.

Building a Recipe Search Site with Angular and Elasticsearch Have you ever wanted to build a search feature into an application? In the old days, you might have found yourself wrangling with Solr, or building your own search service on top of Lucene — if you were lucky. But, since 2010, there’s been an easier way: Elasticsearch. Elasticsearch is an open-source storage engine built on Lucene. It’s more than a search engine; it’s a true document store, albeit one emphasizing search performance over consistency or durability. This means that, for many applications, you can use Elasticsearch as your entire backend. Understanding Angular's $apply() and $digest() $apply() and $digest() are two core, and sometimes confusing, aspects of AngularJS. To understand how AngularJS works one needs to fully understand how $apply() and $digest() work. This article aims to explain what $apply() and $digest() really are, and how they can be useful in your day-to-day AngularJS programming. $apply and $digest Explored AngularJS offers an incredibly awesome feature known as two way data binding which greatly simplifies our lives.

Why you should not use AngularJs Why you should not use AngularJS Much time has passed since AngularJS birth (given the fact how fast front-technologies evolve). Now on the internet, there are a huge amount of posts praising this framework, and the critics are not so many as it deserves. But such posts are slowly beginning to appear, and it pleases me. I hope industry will give up AngularJS, as it gave up MooTools, Prototype, %some new JVM language%, %another-super-modern-technology%. I don’t know why, but in the IT field such revolutionary technologies that raise the noise and then disappear appear quite often. Learn Angular by Building a Gmail Clone AngularJS Tutorial Build a Gmail Clone Introduction Build a simple email application and learn core AngularJS concepts. By the end of this tutorial you'll be able to see (fake) emails, search by subject line, and read / delete emails.

Dan Wahlin - Dynamically Loading Controllers and Views with AngularJS/$controllerProvider and RequireJS Dynamically Loading Controllers and Views Updated: August 30th, 2014 A complete sample application that uses the techniques shown in this post can be found at AngularJS provides a simple way to associate a view with a controller and load everything at runtime using the $routeProvider object. Routing code is typically put in a module’s config() function and looks similar to the following: An Advanced and Easy-use AngularJS Modal Dialog Introduction I previously created a full-featured JQuery dialog plugin, the jqsDialog, for building web pages. Lately I needed the same kind of the modal dialog when developing website applications in AngularJS. Although many ready-use AngularJS modal dialog tools are available from the developer’s communities and other sources, none could be found as with the advanced features as the jqsDialog. I thus again created my own AngularJS modal dialog library, named as ngExDialog, to match all features delivered by the jqsDialog except for the non-modal option, which has very little practical significance, and the progress bar, as most website applications use an AJAX loader display instead. The ngExDialog has these features: