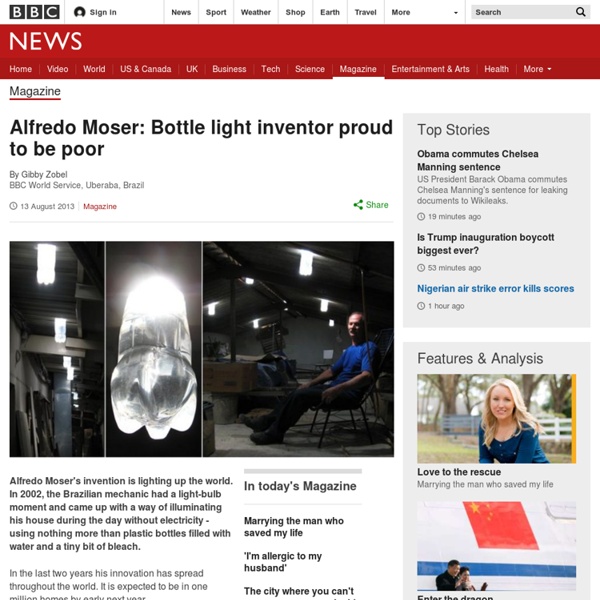 Alfredo Moser's invention is lighting up the world. In 2002, the Brazilian mechanic had a light-bulb moment and came up with a way of illuminating his house during the day without electricity - using nothing more than plastic bottles filled with water and a tiny bit of bleach. In the last two years his innovation has spread throughout the world. It is expected to be in one million homes by early next year. So how does it work? "Add two capfuls of bleach to protect the water so it doesn't turn green [with algae]. Wrapping his face in a cloth he makes a hole in a roof tile with a drill. "You fix the bottle in with polyester resin. "An engineer came and measured the light," he says. The inspiration for the "Moser lamp" came to him during one of the country's frequent electricity blackouts in 2002. Moser and his friends began to wonder how they would raise the alarm, in case of an emergency, such as a small plane coming down, imagining a situation in which they had no matches.

Google launches charity app to funnel $1 at a time toward good causes Google has officially launched One Today, an Android app that puts the spotlight on great charities and lets you give $1 at a time. The whole premise helps to eliminate a few roadblocks that stand between your money and deserving nonprofits. First, it takes away the decision of exactly how much to give. With very few exceptions, most Android users have a dollar and are more than happy to give it to causes they can support ideologically. Second, it gets rid of “analysis paralysis” — the inability to choose a charity precisely because there are too many to choose from. And third, it helps to take care of some of the research behind finding great causes in the first place. Also, instead of giving to a nonprofit as a whole, you donate your dollar to fund a nonprofit’s specific project. The app has been in a limited pilot test for a while, but this week marks its general availability to all Android users. Here’s what it looks like:

Secrets Successful Entrepreneurs Know That Struggling Entrepreneurs Don’t In my 22 + years as an entrepreneur and working with successful entrepreneurs and successful business professionals, universally I’ve discovered that they have learned to think and act like successful people. This is what has allowed them to rise to the top of their profession. Each would tell you that along the way they have learned how to think differently. True, entrepreneurs struggle with their business opportunities for a variety of reasons. Among the most obvious are a lack of capital, lack of understanding about marketing, and personal issues. 1. 2. 3. True entrepreneurs with the right thinking prevail over a period of time. Roles Successful entrepreneurs, in contrast to those who struggle, have learned to separate their roles in life from their self worth or self-identity. Goals Even though much is said and written about goals and plans being necessary for success as an entrepreneur, few people learn the mechanics of successful goal setting and planning. Tolls

How to Cultivate the Best Brand Image Branding is crucial when it comes to establishing a positive reputation for your business – but just how do you go about ensuring your brand image is the best that it could possibly be? Read on for our top tips. 1) Know what you do – and why you do it Having a clear business plan is only part of corporate success – identifying how to go about achieving your goals and, most importantly, why you’re even doing what you’re doing is the key to knowing how best to position your brand. Think about what your products/services are and why you’ve decided to bring them to market. 2) Be consistent The most successful brands in the world are the most recognisable not just because of what they do, but also because they’ve taken great pains to make all of their marketing campaigns consistent with their core message, as well as with those elements that can define a brand in the minds of customers e.g. corporate colours and fonts, slogans, etc. 3) Be approachable 4) Admit when you’ve made a mistake

Why the Web Hasn't Birthed a Prettier Craigslist You can check-out any time you like, But you can never leave! If I told you these Eagles lyrics described a certain website, you'd probably think it was Facebook. After all, public exclamations of quitting Facebook are so common it's cliche, but by and large the people still stay. The same is true on other networks that angered users with product or business changes. The weaknesses in Craigslist are painfully obvious: The site is ugly, any listing you post almost guarantees spam to your inbox, the apartment listings are full of scams, the site was once a known destination for sex trafficking (albeit minimized now) and lastly, people have died from engaging in a Craigslist transaction. Yet, we continue to rely on Craigslist. In my own experience, I've found 13 roommates across five apartments, one studio sublet, purchased a bunk bed and two queen-size mattress sets (new), and bought and subsequently sold a bed frame and a yellow Honda scooter. The Network Problem Undercover Fixes Solutions

How AirBnB Became a Billion Dollar Company - Dave Gooden Disclosure 1: I work in the vacation rental industry. While my company specializes in regional, recreational vacation homes, not metro rentals – there is an obvious conflict. Disclosure 2: This is an opinion piece. Yesterday AirBnB announced that they raised $100M at a $1B valuation. My Answer: Craigslist Spam! I believe AirBnB used multiple gmail accounts to spam craigslist and grow their site to a one billion dollar valuation. Back story: A year and a half or so ago I was looking into the amazing growth of AirBnB. Following my hunch, I started snooping around the place that all good black hats go to make money and get free traffic – craigslist. Please remember, I am not judging anyone here, I am just reporting my findings because I believe it will help other entrepreneurs. Back to my hunch. Again, the email I received was from “girlsname04@gmail.com,” not AirBnB. Week two I upped the ante and advertised two (2) listings on craigslist. On twitter: @davegooden Added 6/15/2011 OK.