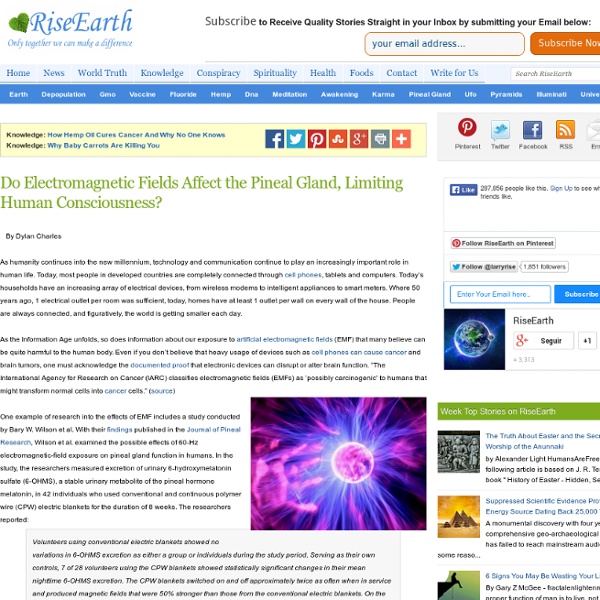 By Dylan Charles As humanity continues into the new millennium, technology and communication continue to play an increasingly important role in human life. Today, most people in developed countries are completely connected through cell phones, tablets and computers. Today’s households have an increasing array of electrical devices, from wireless modems to intelligent appliances to smart meters. Where 50 years ago, 1 electrical outlet per room was sufficient, today, homes have at least 1 outlet per wall on every wall of the house. People are always connected, and figuratively, the world is getting smaller each day. As the Information Age unfolds, so does information about our exposure to artificial electromagnetic fields (EMF) that many believe can be quite harmful to the human body. Volunteers using conventional electric blankets showed no variations in 6-OHMS excretion as either a group or individuals during the study period. Most recently, Malka N. Related:  Consciousness & Awakening • Endocrinologica

3rd Eye Chakra - Third Eye Meditation (Thoh Chant) Warning: This 3rd eye chakra meditation should only be performed by people, who know what they are doing and are absolutely sure that they want to open their 3rd eye chakra. It can have an unceasing effect. It has to be done with caution. It is therefore best if you have some basic knowledge about the 3rd eye chakra before you try it. Step 1 Get Comfortable Find a Comfortable posture for you to sit in. Step 2 Shambhavi Mudra In this step you have to perform the shambhavi mudra, where you have to turn your eyes upward toward your 3rd eye chakra. Step 3 Mouth Position Take a deep breath through you nose. Step 4 Chant Thoh Now exhale through mouth and chant the word ‘thoh’. Step 5 The Right Tone Try to chant in a b or c tone. Step 6 Vibrations When you exhale and chant, you should do it very slowly. Step 7 Second Inhalation Take another deep breath in through your noise. This third eye meditation has to be repeated for 4 more days in a row, 24 hours between every exercise.

5 Attachments to Release on the Path of Enlightenment 25th June 2015 By Wes Annac Guest Writer for Wake Up World You probably don’t need me to tell you that spirituality isn’t all about feeling positive or uplifted. The enlightenment path requires us to sacrifice things that hold us back and keep us from making spiritual progress, and maybe this is where the literal notion of religious sacrifice first originated; from the external and even internal sacrifices we have to make on the enlightenment path. Why do we have to make sacrifices on the spiritual path? The purpose of self-sacrifice isn’t to boss ourselves around or give up things we cherish, unless they cause serious damage – it’s to detach from things that are destructive or which hold us back, so we can make room for more wholesome elements in our life, that accelerate our evolution. Here, I’ll discuss five things you’ll want to consider releasing from your life, if your goal is to walk a spiritual path without falling back into limiting habits and mindsets. 1. 2. 3. 4. 5.

THE PINEAL GLAND & CONNECTION TO MARIJUANA. Why Love And Light Is Only One Side Of The Awakening Story | Wake Up World - Part 2 What else do you do to keep thriving in Crazy Town? What are you doing to help transform your outer world?Let us know on Facebook or comment below! Previous articles by Phillip J. Watt: About the author: Phillip J. Phil has a degree in Social Science and Philosophy and has been trained extensively in health services. The Meaning of the Pineal Gland The pineal gland, a pine-cone shaped gland of the endocrine system, is a highly essential part of the brain necessary to our survival. It is often associated with the third eye or the Ajna chakra, when activated, leads one to higher realms of consciousness. The third eye gives us perception of the universe around us through the five senses. Through our five senses we have self awareness and intelligence: sentience. As a chakra, the third eye, the pineal gland represents the point at which the body receives energy from the universe that keeps our lives sustained; the main access point between the astral body and the physical body. We use our perception, our consciousness and our senses to gain awareness of energy in our world via information around us. Melatonin is not only necessary for proper sleep, but it also regulates the onset of puberty and fight against harmful and free radicals. According to some scientists DMT is constantly being produced in the brain in trace amounts.

pineal gland Rating: 3.5/5 (11 votes cast) 2011 – Documentary about the military industrial complex and how it lobbies for war to boost its profits. The film exposes the big corporations, that are in bed with the politicians, and push for war at every turn of geopolitical events. Like this: Like Loading... Rating: 5.0/5 (1 vote cast) Pawtucket Rising is a new documentary (2011) film about the unlikely story of the revitalization of the city of Pawtucket, Rhode Island. Rating: 0.0/5 (0 votes cast) Thinking the Unthinkable is the next episode that centers around Martin Heidegger, who developed ideas from the writings and ideas of Nietzsche in an attempt to better understand individual human freedom. The monumental treatise Being and Time was published in 1927, the same year as Mein Kampf. The Cost of a Coke lifts the veil on the immoral practices of Coca Cola, the world’s most popular soft drink. Rating: 3.9/5 (11 votes cast)

Mind Control Researchers Create Fake Link Between Unrelated Memories Advancements in genetics and neuroscience are undoubtedly leading toward direct methods of mind control, albeit only with good intentions ... if government and establishment science can be believed. However, an array of hi-tech methods have been announced which show clear potential for negative manipulation. Bold claims have been made by scientists that they now can use "neural dust," high-powered lasers, and light beamed from outside the skull to alter brain function and even turn off consciousness altogether. But it is memory research that might be among the most troubling. As I've previously suggested in other articles, our memories help us form our identity: who we are relative to where we have been. Research has commenced into many facets of how memory can be restructured, whether it is erasing memories, the implantation of false memories, or triggering memories of fear when none previously existed. Once again, memory tinkering is making the news. Press Release You Might Also Like