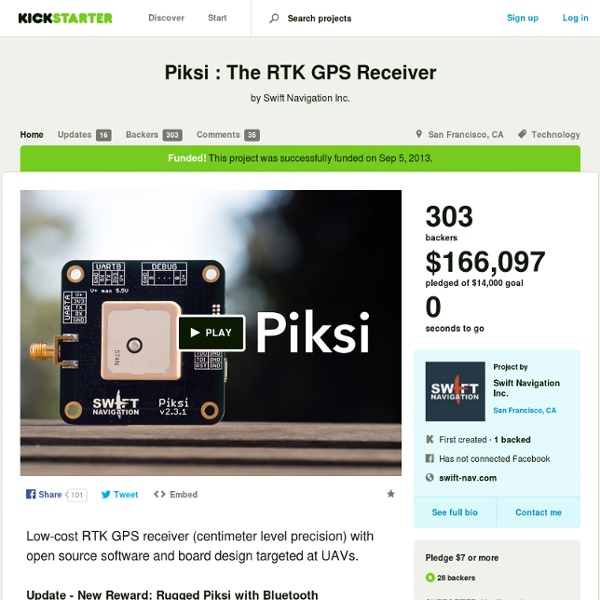 We’ve had a lot of interest in the Piksi RTK system from professionals in the GIS and mapping fields, but our RTK Kit alone was not enough to fulfill this need. To use Piksi in these settings, you need a durable, integrated solution - one that can be turned on with the flick of a switch, and is accompanied by an easy, intuitive user interface. So, we have added a new reward, a ruggedized version of our RTK Kit containing two Piksi receivers each fully assembled with an enclosure, a Bluetooth module, an SD card slot, an integrated radio link, and 10 hours of rechargeable Lithium Polymer batteries. We’ll also be releasing data collection apps for Android and iOS that interface with Piksi over Bluetooth; you’ll be able to take measurements, plot points on your smartphone’s map, and for professionals, export to common formats to integrate into your standard mapping workflow - all with the 4 centimeter accuracy of the Piksi RTK system. Some possible applications: Piksi Technical Specs: Related:  Arduino Extras • dog GPS Collage

An Arduino-compatible, electronic building block system! by GHI Electronics, LLC FEZ Medusa is an open source hardware (OSHW) processor board that combines the Arduino platform with an ever-growing list of modules, for sensing and controlling things. This modular design of building blocks does not require any hardware experience, we call it FEZ for fast and easy. On the software side, you will program using the Arduino IDE, just like if you were programming Arduino Uno, it even hosts the same micro ATMEGA328P. On the hardware side, everything is modular building blocks using a unified socket map. Arduino is one of the most popular platforms for educators and hobbyists. Its open source JAVA IDE is made to run on Windows, Linux and Mac. FEZ Medusa is programmed just like any Arduino-compatible board. The sockets on FEZ Medusa and modules are marked with one or more letters indicating the socket's capability. We have already developed drivers for all compatible modules and for the core functionality that maps the Arduino libraries to the socket mapping.

Open Source Tracking Device by DSS Circuits My project is an Open Source tracking device based on the Arduino platform. A few years ago we had a bad ice storm here in Massachusetts and we lost power for several days. Well during the power outage my brother-in-law's house was robbed and one of the items stolen was my nephews' PS3. As is usually the case, none of the items were ever recovered. I talked to a couple of law enforcement personnel and found out that gaming consoles were one of the most common things stolen from homes. The idea was that if your house got robbed, there's a good chance your fake video game console would be among the list of stolen items. That's when I decided to condense the project down into a single board. The board contains everything you'd need or want in a tracking device. GPS - An ultra sensitive -165dBm receiver with on board passive antenna that can be configured to a 10Hz update rate.GSM - SIM900 Quad band GSM module to connect to the GSM cellular network. Thanks for your support!

RTKLIB on the Raspberry Pi I've got a workmate. He wants to build an autonomous, electric, rotary hoe. Anyway, he needs to locate the hoe to within a few centimetres. I'd been contemplating DGPS for a while as I've found GPS tracks are a bit wandery when logging tracks for OpenStreetMap. I thought it'd be a good capability to have, so I've stepped up to the task of tracking Robohoe. Background Information This is basically a link dump of what I've found so far: RTKLIB : DGPS software This is the bees knees for cheap arse DGPS. It's also got a number of other super handy programs, that do things like convert RTKLIB output into a Google Earth KML file, serve serial input out to multiple processes via Unix sockets etc. The RTKLIB manual is here. LEA-4T : GPS hardware The U-Blox 'T' series of modules (the LEA-4T, LEA-5T, and NEO-6T) produce data suitable for input to RTKLIB. The pinout for this module is (from here):antenna - SMB male connector 2 4 6 8 1 3 5 7 bottom EBay : USB serial unit Generic FTDI USB serial dongle.

Sensors GPS Module We often think that GPS modules are useful for map-tracking purposes only, but the GPS can be used to acquire much more important data: from brakes analysis to chassis info and, obviosly, driver's behaviour while on track. Thanks to the GPS module, you will be able to visualize track data with speed, position (including driver's errors) and visualize those information in Google Earth. All of your performances on the track viewed through real, stunning images. This is all you need to improve your driving skills and start tuning your car! The GPS module is connectable and perfectly compatible with other AIM products such MXL professional gauge or EVO 3 datalogger. Information you'll get thanks to GPS module: * Position * Speed * Cornering rate * Cornering in-line and lateral G * Lap times Download

Arduino 16 Channel Digital Power Shield by ElectronicKit.com I have been thinking of entering the electronic kit market for several years, but the time was never right. This EKT-1016 Arduino shield is my first attempt to produce and sell an electronic product in kit form. The Arduino is a very popular platform for student, hobbyist, experimenter, electronic technician or engineer to learn computer electronics and programming. Low cost 3D printers are nearly 100% Arduino based using dedicated motor control ICs. The problem I ran into when trying to interface high power LEDs with an Arduino is that there are not many discrete universal power driver shields available and none that offer more than 8 channels of power output. The EKT-1016 shield is not only usable for simple stepper motor control (running 4 stepper motors / card) and high current LEDs, but can also be used for controlling a variety of DC devices from 5V to 36V that draw 1A or less. By no means a complete list, here are a few devices that come to mind: Here is a prototype bare board.

Shrunk down an Arduino to the size of a finger-tip! by Open Source RF RFduino: A finger-tip sized, Arduino compatible, wireless enabled microcontroller, low cost enough to leave in all of your projects! The RFduino has Bluetooth 4.0 Low Energy built-in, which enables it to wirelessly talk to any smartphone that has Bluetooth 4.0. Currently we have several open source apps built for the iPhone which were used in our demos. Open source Android apps are next. The RFduino has a Nordic 32 bit ARM Cortex-M0 processor, so it has more power then the UNO, however it still runs the same, simple Arduino code the UNO runs, so there is no need to learn any new programming language or environment. The RFduino GPIO lines all support, Digital IO, Analog ADC, SPI, I2C, UART and PWM. The RFduino is similar to the Arduino UNO or DUE, except the RFduino is a fraction of the cost and size, in addition has wireless smartphone connectivity built-in! Up to now, adding wireless to an Arduino required an additional wireless shield which adds cost and size. - Armen

An Introduction to GNSS | Chapter 4 - Real-Time Kinematic | NovAtel The positioning technique we described in Chapter 2 is referred to as code-based positioning, because the receiver correlates with and uses the pseudorandom codes transmitted by four or more satellites to determine the ranges to the satellites. From these ranges and knowing where the satellites are, the receiver can establish its position to within a few metres. For applications such as surveying, higher accuracies are required. Real-time kinematic techniques are complicated. At a very basic conceptual level, as shown in Figure 38, the range is calculated by determining the number of carrier cycles between the satellite and the rover station, then multiplying this number by the carrier wavelength. Figure 38 Real-Time Kinematic A complicated process called “ambiguity resolution” is needed to determine the number of whole cycles. Rovers determine their position using algorithms that incorporate ambiguity resolution and differential correction. Virtual Reference Stations (VRS)

Finding the right sensor for linear displacement | Sensors content from Machine Design Les Schaevitz Design-for-Application Product Manager Macro Sensors Div. Howard A. Schaevitz Technologies Inc. Pennsauken, N.J. Engineers continue to increase their use of linear-position and displacement sensors for providing real-time information to feedback-hungry PLCs and microcontrollers, which are taking over more control of linear-position/actuator-based systems. These devices, known as linear-position and displacement sensors, are proportionaloutput devices that continuously indicate position. Although most of the sensing technologies discussed here can be used in rotary and angular-position sensing, we will stick to linear applications, specifically those used in most industrial and commercial applications of 100min. to 100 in. (2.5mm to 2.5 m). Basic economic issues of price and nonrecurring expenses. OEMs buying sensors are heavily driven by economics. Resistive sensors or “pots" (short for potentiometer) are the best-known and most frequently used resistive sensors.

Electronic Kit Website NavSpark: Arduino Compatible with GPS GNSS Receiver English, Simplified Chinese (简体中文), Traditional Chinese (繁體中文) For viewers in some region having problem seeing the above YouTube video, the contents is here: Powerpoint (简体中文), Youku Video (简体中文). NavSpark 点名时间上中文說明: NavSpark is a small, powerful, breadboard-friendly, 32bit development board that is Arduino compatible, with a world class GPS receiver as on-board peripheral, and under $15. There is also NavSpark-BD, a variant model having world-class GPS/Beidou receiver as on-board peripheral, that enables you to adopt new GPS/Beidou satellite navigation technology when Broadcom Qualcomm just recently came out with solution supporting Beidou to their tier-1 smartphone customers like Apple and Samsung. NavSpark puts leading edge satellite navigation technology in the hands of the makers. Up until now, adding GPS to an Arduino requires additional GPS shield, which adds cost and size. We have been developing GPS related products for some years. · GPS on board 1.