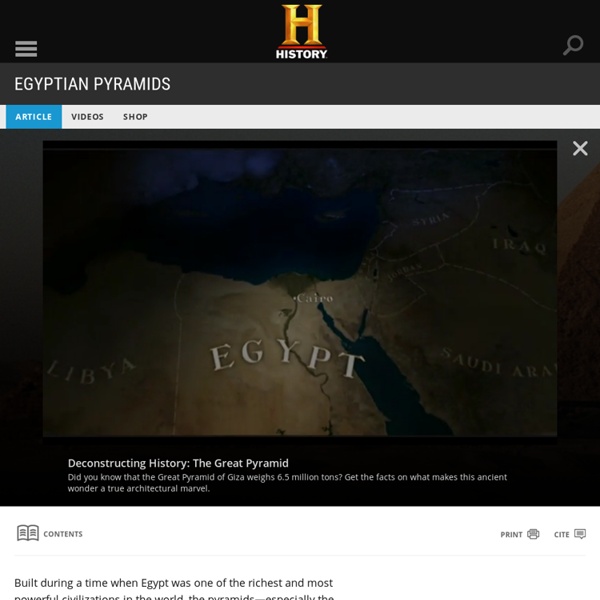 No pyramids are more celebrated than the Great Pyramids of Giza, located on a plateau on the west bank of the Nile River, on the outskirts of modern-day Cairo. The oldest and largest of the three pyramids at Giza, known as the Great Pyramid, is the only surviving structure out of the famed seven wonders of the ancient world. It was built for Khufu (Cheops, in Greek), Sneferu’s successor and the second of the eight kings of the fourth dynasty. Though Khufu reigned for 23 years (2589-2566 B.C.), relatively little is known of his reign beyond the grandeur of his pyramid. The middle pyramid at Giza was built for Khufu’s son Khafre (2558-2532 B.C). Approximately 2.3 million blocks of stone (averaging about 2.5 tons each) had to be cut, transported and assembled to build Khufu’s Great Pyramid. Related:  Night at the Museum • Social sciences

Sevens Wonders of the Ancient World - Ancient History Located in what is now southeastern Turkey, the Mausoleum at Halicarnassus was a tomb built by Artemisia for her husband, Mausolus, the king of Carnia in Asia Minor, after his death in 353 B.C. Mausolus was also Artemisia’s brother, and, according to legend, she was so grief-stricken at his passing that she mixed his ashes with water and drank them in addition to ordering the mausoleum’s construction. The massive mausoleum was made entirely of white marble and is thought to have been about 135 feet high. The building’s complicated design, consisting of three rectangular layers, may have been an attempt to reconcile Lycian, Greek and Egyptian architectural styles.

The Children's University of Manchester The Discovery of Tutankhamun's tomb for Kids The Discovery of Tutankhamun's tomb for Kids Tutankhamen Several finds made in the Valley of the Kings over the years led Howard Carter to believe that the king was still somewhere in the Valley. Carter had a plan of the valley on which he marked all the spoil heaps and cuttings made by previous excavations. Carter thought it was possible that the missing tomb could be under the mound of rubble and stone chippings and was determined to find out.

Japan's Ancient Underwater "Pyramid" Mystifies Scholars September 19, 2007 Submerged stone structures lying just below the waters off Yonaguni Jima are actually the ruins of a Japanese Atlantis—an ancient city sunk by an earthquake about 2,000 years ago. That's the belief of Masaaki Kimura, a marine geologist at the University of the Ryukyus in Japan who has been diving at the site to measure and map its formations for more than 15 years. Each time he returns to the dive boat, Kimura said, he is more convinced than ever that below him rest the remains of a 5,000-year-old city. "The largest structure looks like a complicated, monolithic, stepped pyramid that rises from a depth of 25 meters [82 feet]," said Kimura, who presented his latest theories about the site at a scientific conference in June. But like other stories of sunken cities, Kimura's claims have attracted controversy. Ruins Point A local diver first noticed the Yonaguni formations in 1986, after which a promontory on the island was unofficially renamed Iseki Hanto, or Ruins Point.

The Taj Mahal - Facts & Summary Shah Jahan was a member of the Mughal dynasty that ruled most of northern India from the early 16th to the mid 18th-century. After the death of his father, King Jahangir, in 1627, Shah Jahan emerged the victor of a bitter power struggle with his brothers, and crowned himself emperor at Agra in 1628. At his side was Arjumand Banu Begum, better known as Mumtaz Mahal (“Chosen One of the Palace”), whom he married in 1612 and cherished as the favorite of his three queens. In 1631, Mumtaz Mahal died after giving birth to the couple’s 14th child.

Encyclopedia Smithsonian: The Egyptian Pyramid The pyramids of Egypt fascinated travellers and conquerors in ancient times and continue to inspire wonder in the tourists, mathematicians, and archeologists who visit, explore, measure and describe them. Tombs of early Egyptian kings were bench-shaped mounds called mastabas. Around 2780 B.C., King Djoser's architect, Imhotep, built the first pyramid by placing six mastabas, each smaller than the one beneath, in a stack to form a pyramid rising in steps. This Step Pyramid stands on the west bank of the Nile River at Sakkara near Memphis. Like later pyramids, it contains various rooms and passages, including the burial chamber of the king. The transition from the Step Pyramid to a true, smooth-sided pyramid took placed during the reign of King Snefru, founder of the Fourth Dynasty (2680-2560 B.C.). The largest and most famous of all the pyramids, the Great Pyramid at Giza, was built by Snefru's son, Khufu, known also as Cheops, the later Greek form of his name.

The Discovery of King Tut's Tomb By Jennifer Rosenberg Updated November 04, 2015. Howard Carter and his sponsor, Lord Carnarvon, spent a number of years and a lot of money searching for a tomb in Egypt's Valley of the Kings that they weren't sure still existed. On November 4, 1922, they found it. Carter had discovered not just an unknown ancient Egyptian tomb, but one that had lain nearly undisturbed for over 3,000 years. What lay within King Tut's tomb astounded the world. Carter and Carnarvon Howard Carter had worked in Egypt for 31 years before he found King Tut's tomb. Carter had begun his career in Egypt at age 17, using his artistic talents to copy wall scenes and inscriptions. George Edward Stanhope Molyneux Herbert, the fifth Earl of Carnarvon, loved to race around in the newly invented automobile. continue reading below our video Loaded: 0% Progress: 0% Turning up nothing but a mummified cat (still in its coffin) his first season, Lord Carnarvon decided to hire someone knowledgeable for the succeeding seasons. Steps!

New Pyramid Found in Antarctica 2013: Atlantis Google Earth: Noiselab Project "Enigmatic". Full HD Easter Island - Facts & Summary The first known European visitor to Easter Island was the Dutch explorer Jacob Roggeveen, who arrived in 1722. The Dutch named the island Paaseiland (Easter Island) to commemorate the day they arrived. In 1770, the Spanish viceroy of Peru sent an expedition to the island; the explorers spent four days ashore and estimated a native population of some 3,000 people. Just four years later, the British navigator Sir James Cook arrived to find Easter Island’s population decimated by what seemed to have been a civil war, with only 600 to 700 men and fewer than 30 women remaining. A French navigator, Jean-Francois de Galaup, comte de La Perouse, found 2,000 people on the island when he arrived in 1786.

Suez Canal The canal is owned and maintained by the Suez Canal Authority[6] (SCA) of Egypt. Under international treaty, it may be used "in time of war as in time of peace, by every vessel of commerce or of war, without distinction of flag. History[edit] Northern outlet of the Suez Nile–Red Sea Canal(s)[edit] Ancient west–east canals were built to facilitate travel from the Nile to the Red Sea.[8][9][10] One smaller canal is believed to have been constructed under the auspices of either Senusret II[11] or Ramesses II.[8][9][10] Another canal, probably incorporating a portion of the first,[8][9] was constructed under the reign of Necho II; however, the only fully functional canal was engineered and completed by Darius I.[8][9][10] 2nd millennium BC[edit] The legendary Sesostris (likely either Pharaoh Senusret II or Senusret III of the Twelfth dynasty of Egypt[11][12]) is suggested to have perhaps started work on an ancient canal joining the River Nile with the Red Sea (1897 BC–1839 BC). 165.