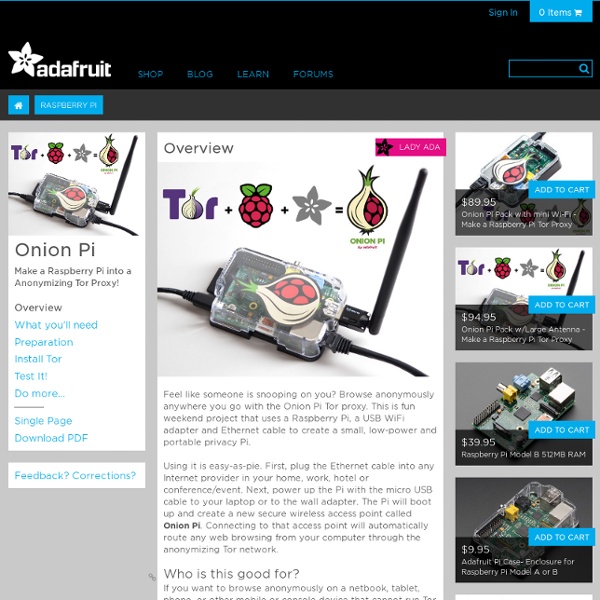 Feel like someone is snooping on you? Browse anonymously anywhere you go with the Onion Pi Tor proxy. This is fun weekend project that uses a Raspberry Pi, a USB WiFi adapter and Ethernet cable to create a small, low-power and portable privacy Pi. Using it is easy-as-pie. If you want to browse anonymously on a netbook, tablet, phone, or other mobile or console device that cannot run Tor and does not have an Ethernet connection. According to the Tor website: Journalists use Tor to communicate more safely with whistleblowers and dissidents. Related:  Technology II • #crosspearlpage.atroot

justifiable existence All Can Be Lost: The Risk of Putting Our Knowledge in the Hands of Machines - Nicholas Carr We rely on computers to fly our planes, find our cancers, design our buildings, audit our businesses. That's all well and good. But what happens when the computer fails? On the evening of February 12, 2009, a Continental Connection commuter flight made its way through blustery weather between Newark, New Jersey, and Buffalo, New York. As is typical of commercial flights today, the pilots didn’t have all that much to do during the hour-long trip. The captain, Marvin Renslow, manned the controls briefly during takeoff, guiding the Bombardier Q400 turboprop into the air, then switched on the autopilot and let the software do the flying. The crash, which killed all 49 people on board as well as one person on the ground, should never have happened. The Buffalo crash was not an isolated incident. And that, many aviation and automation experts have concluded, is a problem. The experience of airlines should give us pause. Doctors use computers to make diagnoses and to perform surgery.

Breakthrough Nanotechnology Will Bring 100 Terabyte 3.5-inch Digital Data... Have you ever dream of 100 terabyte of data per 3.5-inch disk? New patented innovation nanotechnology from Michael E. Thomas, president of Colossal Storage Corporation, makes it real. Michael invented and patented the world's first and only concept for non-contact UV photon induced electric field poling of ferroelectric non-linear photonic bandgap crystals, which offers the possibility of controlling and manipulating light within a UV/Deep Blue frequency of 1 nm to 400 nm. It took him 14 years to find a practical conceptualization that would work to advance the storage industry; 3D Volume Holographic Optical Storage Nanotechnology, for which Michael holds the patents. • Join PhysOrg.com on Facebook! This invention and patents on a technique for changing matter at the molecular level is one of the World's only new enabling technologies, having many hundreds of electro-optic applications. “In 1974 I was making 5 Megabyte disk packs - the biggest at that time in the world.

How to Extract DNA from Anything Living First, you need to find something that contains DNA. Since DNA is the blueprint for life, everything living contains DNA. For this experiment, we like to use green split peas. But there are lots of other DNA sources too, such as: Spinach Chicken liver Strawberries Broccoli Certain sources of DNA should not be used, such as: Your family pet, Fido the dog Your little sister's big toe Bugs you caught in the yard Step 1: Blender Insanity! Put in a blender: 1/2 cup of split peas (100ml) 1/8 teaspoon table salt (less than 1ml) 1 cup cold water (200ml) Blend on high for 15 seconds. The blender separates the pea cells from each other, so you now have a really thin pea-cell soup. Step 2: Soapy Peas Pour your thin pea-cell soup through a strainer into another container (like a measuring cup). Add 2 tablespoons liquid detergent (about 30ml) and swirl to mix. Let the mixture sit for 5-10 minutes. Pour the mixture into test tubes or other small glass containers, each about 1/3 full. Why am I adding detergent?

Nanowire battery can hold 10 times the charge of existing lithium-ion battery Stanford Report, December 18, 2007 Courtesy Nature Nanotechnology Photos taken by a scanning electron microscope of silicon nanowires before (left) and after (right) absorbing lithium. Both photos were taken at the same magnification. The work is described in “High-performance lithium battery anodes using silicon nanowires,” published online Dec. 16 in Nature Nanotechnology. Stanford researchers have found a way to use silicon nanowires to reinvent the rechargeable lithium-ion batteries that power laptops, iPods, video cameras, cell phones, and countless other devices. The new technology, developed through research led by Yi Cui, assistant professor of materials science and engineering, produces 10 times the amount of electricity of existing lithium-ion, known as Li-ion, batteries. "It's not a small improvement," Cui said. The greatly expanded storage capacity could make Li-ion batteries attractive to electric car manufacturers. Cui's battery gets around this problem with nanotechnology.

How to avoid getting trapped in FEMA camps By James Smith I wrote a news story recently called “How technology will send you to hell in the FEMA camps” It was wildly popular and raised the question in my mind, “How do I prevent my family from going to the camps?” The first thing is to know what to expect before hand. While people think about the dollar dropping to nothing, or an Obama re-election, you need to consider the most pressing signs of a pending martial law. How pending? About 15 minutes or less away from being put into a bus. Now there are people who would look forward to 3 hots and a cot. But we aren’t those people. So what do we look for? Using the backbone of a military operation, you must make the enemy (that would be you) deaf, dumb, and blind. What does that mean? Deaf means that you won’t know what is going on. Dumb, or mute, means you won’t be able to call anyone, tweet, post a Facebook update, send an email of warning. Your neighborhood is now deaf, dumb, and blind. You need to buy yourself some time.

Through a glass, clearly One of the most instantly recognizable features of glass is the way it reflects light. But a new way of creating surface textures on glass, developed by researchers at MIT, virtually eliminates reflections, producing glass that is almost unrecognizable because of its absence of glare — and whose surface causes water droplets to bounce right off, like tiny rubber balls. The new “multifunctional” glass, based on surface nanotextures that produce an array of conical features, is self-cleaning and resists fogging and glare, the researchers say. The technology is described in a paper published in the journal ACS Nano, co-authored by mechanical engineering graduate students Kyoo-Chul Park and Hyungryul Choi, former postdoc Chih-Hao Chang SM ’04, PhD ’08 (now at North Carolina State University), chemical engineering professor Robert Cohen, and mechanical engineering professors Gareth McKinley and George Barbastathis.

Great Pyramid Hydraulic Pulse Generator and Water Pump [Back to Pinnacle Black Russian Terriers] Stumble It! The Great Pyramid’s Subterranean Chamber Hydraulic Pulse Generator and Water Pump John Cadman (This article has many pictures. If all fail to load then hit refresh on your browser) Pumping and pulsing model of the subterranean section of the Great Pyramid. The following article is about the subterranean section of the Great Pyramid. This research has been published in Dr. Do you know what 0.0001" looks like? The machine that I'm proposing is not out of the realm of what the pyramid builders have shown that they could produce. FIGURE 1. The causeway from the Great Pyramid can be seen leading down to the location of the ancient Nile River. Fluffy Egyptology has been polarized into two primary factions. The oral indigenous teachings state: Did these buildings actually come from an earlier time of a more advanced civilization? The use of the Great Pyramid's subterranean layout produces the best and most advanced hydraulic ram pump ever built.

Smartphone Biosensor Devised to Detect Toxins, Pathogens | Science Business Biosensor smartphone and cradle (Brian Cunningham, University of Illinois) Engineers at University of Illinois in Urbana created a system harnessing an iPhone’s camera to turn the phone into a biosensor that can detect proteins, bacteria, viruses, and toxins. The team led by engineering professor and entrepreneur Brian Cunningham published its findings in a recent online issue of the journal Lab on a Chip (paid subscription required). The biosensor is based on the ability of photonic crystals to alter the frequency of light, which are then captured by the smartphone’s camera. In the case of the Illinois sensor, biological material — e.g., proteins or bacteria — binds to the photonic crystal, altering the reflected light frequency from a shorter to longer wave length, and changing color accordingly. The technician inserts the slide with the specimen sample into the cradle and the reflected light spectrum is measured. Read more:

Make CNC DIY Projects & Products | MakeCNC.com Home-built "Bio Computer" runs Linux, grows wheatgrass We've seen the wacky homebrew projects of computer hardware hacker Mike Schropp before. Mindful Gizmag readers may recall his triple quad-core i7 LEGO PC housing that we looked at last July. But his latest project, the "Bio Computer," is rather more oddball, taking a turn distinctly towards the horticultural with a PC case adapted to ... grow wheatgrass. "I'm not complaining by any means, but I do feel as my basement becomes populated with more and more tech based projects that the environment is missing something organic, something natural to balance things out," writes Schropp, on his website, Total Geekdom. But where you or I might buy in a cactus or two, an amaryllis or perhaps even go bonsai, Schropp opted to merge the organic with the inorganic, putting the waste heat from a PC to use with an integrated flowerbed. Well, not strictly a flowerbed. Source: Total Geekdom, via TreeHugger