Monsanto’s Dirty Dozen: The 12 Most Awful Products Made By Monsanto 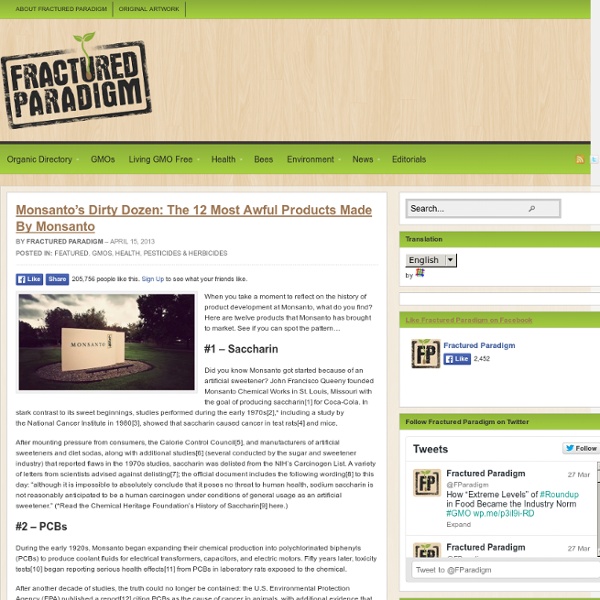 When you take a moment to reflect on the history of product development at Monsanto, what do you find? Here are twelve products that Monsanto has brought to market. See if you can spot the pattern… #1 – Saccharin Did you know Monsanto got started because of an artificial sweetener? John Francisco Queeny founded Monsanto Chemical Works in St. After mounting pressure from consumers, the Calorie Control Council[5], and manufacturers of artificial sweeteners and diet sodas, along with additional studies[6] (several conducted by the sugar and sweetener industry) that reported flaws in the 1970s studies, saccharin was delisted from the NIH’s Carcinogen List. #2 – PCBs During the early 1920s, Monsanto began expanding their chemical production into polychlorinated biphenyls (PCBs) to produce coolant fluids for electrical transformers, capacitors, and electric motors. After another decade of studies, the truth could no longer be contained: the U.S. #3 – Polystyrene #6 – Dioxin #7 – Agent Orange P.S. Related:  Monsanto • think

Monsanto Stock in Danger, Investor Warns | Markets (Before It's News) I was shocked to read a story in Canada’s highly conservative national newspaper, The Globe and Mail, a couple of days ago in which well-known investor and columnist Chris Umiastowski, P.Eng., MBA, warned of the risk in holding Monsanto stock. It was refreshing to read the views of an investor who is not just concerned about the bottom line but also the potential health and environmental risks in such a conservative paper. In his column, “Monsanto: A food stock with a bad aftertaste,” he shares: “it’s just as important to know what stocks to avoid as it is to know which ones to invest in. While labelling of GM-foods is not legally required in Canada or in the United States, consumer groups are gradually certifying an increasing number of foods as “GM-Free” as a way to take back a right that regulators are not recognizing that we deserve. Mr.

Wikileaks Party - Home Monsanto Has Taken Over the USDA The U.S. Department of Agriculture has been taken over by an outside organization. RootsAction has launched a campaign demanding a Congressional investigation. The organization is called Monsanto. Monsanto is, of course, the world's largest biotech corporation. These are the people who brought us Roundup weed killer and the resulting superweeds and superbugs, along with growth hormones for cows, genetically engineered and patented seeds, PCBs, and Agent Orange -- which Monsanto now wants us to use as herbicide on genetically engineered corn and soybeans. This chemical company -- responsible for environmental disasters that have destroyed entire towns, and a driving force behind the international waves of suicides among farmers whose lives it has helped ruin -- has monopolized our food system largely by taking over regulatory agencies like the U.S. A recent study links Roundup to autism, Parkinson's, and Alzheimer's. The takeover has been thorough. The revolving door keeps revolving.

The Hidden History Of The Human Race Our history is not what we think! Over the past few thousand years, we have warped our own history. Our versions of the past has been mistranslated, changed, altered, and skewed to fit our understanding of reality, and completely left our many things that we cannot explain. Michael Cremo is interviewed about his archeological discoveries and the cover up of the scientific community. Michael Cremo is a member of the World Archeological Congress and the European Association of Archaeologists as well as an associate member of the Bhaktivedanta Institute specializing in history and philosophy of science. “Looking at the possibility that there were previous advanced civilizations on Earth, modern buildings made of steel and glass will not last over vast periods of time. “There is evidence that humans were present before, during, and after the age of the dinosaurs. Related Posts

WikiLeaks Party Wikileaks Party - WIKILEAKS PARTY FUNDRAISING DRIVE The WikiLeaks Party is your party. Help us take the fight to Canberra in 2013. This month the WikiLeaks Party launches its fundraising drive, our goal: $700,000. We are running 6 or 7 candidates in Victoria, New South Wales, Western Australia and possibly also Queensland and Tasmania. Polls are showing support for our party is running high. With a solid financial base our party can take our core values and put them into action; by communicating on a variety of platforms, by promoting our candidates and by engaging with and connecting with Australians who demand a more accountable government and a fairer and more just society. This September, Australians will be faced with parties of secret deals, of compromise and of corruption. How you can support the Wikileaks Party - Donations by EFT, credit card, cash, cheque or BitCoin - Hold a WikiLeaks Party fundraiser; party, dinner or other event - In kind services and skills - let us know via our Volunteer page

Monsanto hires infamous mercenary firm Blackwater to track activists around the world (NaturalNews) Remember the private mercenary army Blackwater that caused such a stir in Iraq during an unprovoked attack in 2007? Apparently, Monsanto and the controversial security firm are in bed together, described by blogger Randy Ananda as "a death-tech firm weds a hit squad." At this point, you might be wondering what in the world the GM seed giant needs with the services of a 'shadow army'? It appears as though the corporation found it necessary to contract with Blackwater in order to collect intelligence on anti-Monsanto activists as well infiltrate their ranks.Notorious for the Iraqi Nisour Square Massacre, Blackwater "created a web of more than 30 shell companies or subsidiaries in part to obtain millions of dollars in American government contracts after the security company came under intense criticism for reckless conduct in Iraq," reports the New York Times. As the plot continues to thicken regarding Monsanto's tactics of domination, Ananda aptly notes: "...

16 Foods That Will Re-Grow From Kitchen Scraps 16 Foods That Will Re-Grow From Kitchen Scraps There’s nothing like eating your own home- grown veggies, and there are heaps of different foods that will re-grow from the scrap pieces that you’d normally throw out or put into your compost bin. It’s fun. And very simple … if you know how to do it. Just remember … the quality of the “parent” vegetable scrap will help to determine the quality of the re-growth. So, wherever possible, buy local organic produce, so you know that your re-grown plants are fresh, healthy and free of chemical and genetic meddling. Leeks, Scallions, Spring Onions and Fennel You can either use the white root end of a vegetable that you have already cut, or buy a handful of new vegetables to use specifically for growing. Simply place the white root end in a glass jar with a little water, and leave it in a sunny position. Lemongrass Lemongrass grows just like any other grass. Within a week or so, new growth will start to appear. Celery, Bok Choi, Romaine Lettuce & Cabbage