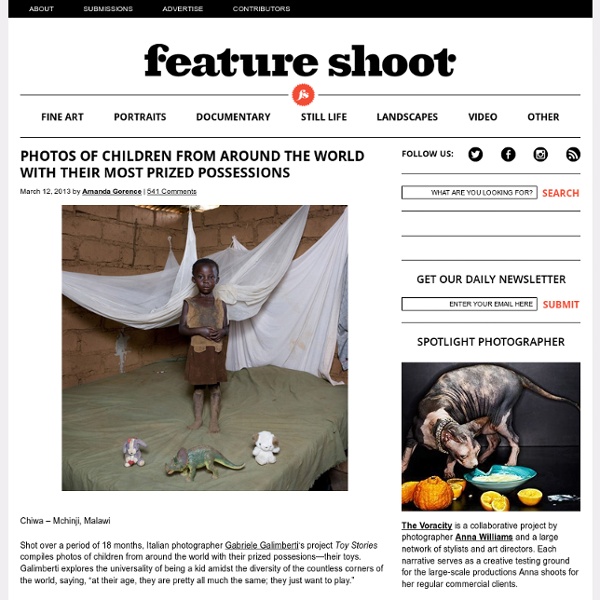 Chiwa – Mchinji, Malawi Shot over a period of 18 months, Italian photographer Gabriele Galimberti‘s project Toy Stories compiles photos of children from around the world with their prized possesions—their toys. Galimberti explores the universality of being a kid amidst the diversity of the countless corners of the world, saying, “at their age, they are pretty all much the same; they just want to play.” But it’s how they play that seemed to differ from country to country. Galimberti found that children in richer countries were more possessive with their toys and that it took time before they allowed him to play with them (which is what he would do pre-shoot before arranging the toys), whereas in poorer countries he found it much easier to quickly interact, even if there were just two or three toys between them. There were similarites too, especially in the functional and protective powers the toys represented for their proud owners. Stella – Montecchio, Italy Pavel – Kiev, Ukraine

These Creepy Comments From Children Will Give You Chills When my youngest son was maybe 2 years old, he crept outside our bedroom door very early one morning while my husband and I were still asleep. I awoke to a deadpan, tiny voice whispering, "Let her in. Let. Her. Turns out the cat was pawing at the back door, and he was just informing us it was time to, you know, let her in. That was a legitimately spooky moment, but it doesn't even hold a (flickering, ghostly) candle to this hair-raising Reddit thread titled, "Parents, what is the creepiest thing your young child has ever said to you?" Want to see some of the most unsettling of the bunch? I was tucking in my two year old. While changing my daughter in front of the open closet door. I was on a bus recently and we were stopped outside a walk-in clinic. I jokingly asked: "What's the best way to get a girlfriend?" "Before I was born here, I had a sister, right? My 5 year old at the time had night terrors and would scream in her sleep. Has your child ever said anything super creepy like this?

Attack of the Cuties: 35 Cute Pictures of Animals Doing Their Thing You deserve a little bit refreshment after a hard working week. Have something to say about this post? Don't be shy! DisHollywood - Art Fucks Me is José Rodolfo Loaiza Ontiveros‘s latest visual project which attempts to re-mix beloved characters from fairy tales with other entertainment icons from the world of cinema, celebrity and music. DisHollywood is also a barometer for measuring our tolerance and acceptance levels; a new way of observing the “happy ending” that trumpets the time of equality is now. In contrast to the baroque fantasy implied by the original, idealized presentation of these characters, a new context of social vulnerability shows the darker side of our contemporary society. celebritydisneyhollywood Carolin Hello, I'm a 26-years old drama queen based in Frankfurt, Germany. You may also like 7 Comments Reply March 31, 2014 Defiance FIRST! Leave a Reply Feeling lucky? Random Post Recent Posts get featured submit your work Categories More Stories ‘Searching for Paradise’ by Shuichi Nakano