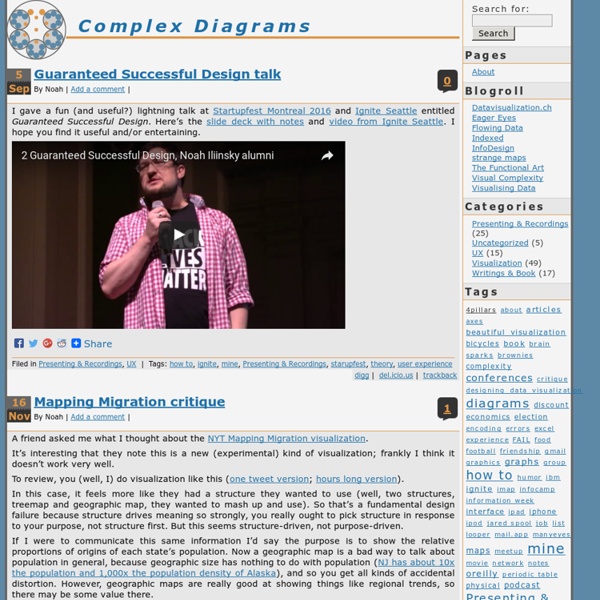 The book The Functional Art is an introduction to Information Graphics and Visualization, the communication of facts and data by means of charts, graphs, maps, and diagrams. It includes a DVD including 90 minutes of video lectures. Download three chapters for free here Table of contents: Part 1 - FOUNDATIONS• Chapter 1 - Why Visualize? Part 2 - COGNITION• Chapter 5 - The Eye and the Visual Brain• Chapter 6 - Visualizing for the Mind• Chapter 7 - Images in the Head Part 3 - PRACTICE• Chapter 8 - Creating Information Graphics• Chapter 9 - Interactive Graphics and Visualizations Part 4 - PROFILES Data Visualization Blog | Visual.ly Content alone does not make a great video; you need a great video design that make a visual statement combining design and data visualization to deliver a story. Designers often get a little excited and put too much fancy design to fill in the space. The best content marketing brands are the ones that know how use content to drive conversions and pushing the boundaries. Keep in mind, quality = attention span. “Bosch Envision 360 VR” – Bosch Auto Parts The new Bosch Envision windshield wiper blade sharpens night visibility and offers extreme weather safety. “Morton Salt Girl’s 100th Birthday” – Morton Salt For 100 years, we’ve celebrated life’s moments with the Morton Salt Girl — from birthdays to holidays to the everyday. “Autodesk Forge” – Autodesk Autodesk came to Visually to help translate the features of their new Forge platform into vignettes with fantasy machinery... keep reading

blprnt.blg | Jer Thorp Global internet slows after 'biggest attack in history' 27 March 2013Last updated at 13:03 GMT By Dave Lee Technology reporter, BBC News The BBC's Rory Cellan-Jones explains why the attack is like a "motorway jam", alongside expert David Emm from Kaspersky Lab The internet around the world has been slowed down in what security experts are describing as the biggest cyber-attack of its kind in history. A row between a spam-fighting group and hosting firm has sparked retaliation attacks affecting the wider internet. Experts worry that the row could escalate to affect banking and email systems. Five national cyber-police-forces are investigating the attacks. Spamhaus, a group based in both London and Geneva, is a non-profit organisation that aims to help email providers filter out spam and other unwanted content. To do this, the group maintains a number of blocklists - a database of servers known to be being used for malicious purposes. Cyberbunker has not responded to the BBC's request for comment. 'Immense job' Continue reading the main story

Infographic of the Day: A Strange, Brilliant Map Of The World's Population In the visual syntax of infographics and maps, bigger equals… well, bigger. Large dots on a map or bars in a chart correspond to a proportionally large quantity of stuff being visualized--like, for instance, the number of people living in a certain geographic area. But its new visualization of world population density called "Dencity," Fathom turns this basic graphic language on its head. What if bigger dots on a map signified fewer people, sparsely scattered? Fathom, the information-visualization firm cofounded by Processing inventor Ben Fry, created "Dencity" in response to a somewhat ambivalent milestone: the world’s population surpassing 7 billion souls. [Click to view larger] In that light, Fathom’s choice to represent larger quantities (the aforementioned #$*&load of people) with smaller graphical elements (smaller, brighter circles on the map) ingeniously captures the narrative of "what seven billion looks like." [Eastern China]

Datavisualization Global Consciousness Project -- consciousness, group consciousness, mind Malaria: The Drug Resistance Story Drugs and Diagnostics The current treatment for malaria is artemisinin-based combination therapies (ACTs). ACTs are effective and are well-tolerated by patients, but because of their high cost, patients often purchase cheaper, less-effective drugs, poor-quality drugs, or counterfeits, all of which can increase the risk that drug-resistant strains of malaria will emerge. Resistance has already been observed in Southeast Asia. A nurse dispenses a malaria drug to treat an infected child in Tanzania To improve the availability of treatments and eventually develop a single-dose cure for malaria, it is important to diversify the drug pipeline and invest in the discovery and development of effective non-artemisinin-based treatments. Our strategy supports the effective delivery of ACTs, the elimination of artemisinin resistance, and the discovery of novel malaria drugs. Our investments include: Vector-Control Tools Vaccines Integrated Interventions Advocacy, Policy, and Financing

The Empire Didn’t Strike Back… The Demise of FuturICT Posted by gregfisher on Jan 22nd, 2013 in Blog , Social | 6 comments By Greg Fisher Last week the European Commission chose not to invest in FuturICT, which was a massively ambitious project to integrate ICT and complexity science. Driven mainly by ETH in Zurich and UCL in London, a stellar consortium of universities was created across the entire European Union, and had the active support of MIT in the US. Yet the project has failed. What does this mean for complexity science? There is a view that the project was top-heavy with people from a physics or maths background (all of whom are extremely clever people) who do not always understand that social systems are fundamentally different from physical ones. Extending and reinvigorating the social sciences by complexity science, and in particular by the science of networks, will remain a major theme in the future. Share this Article: