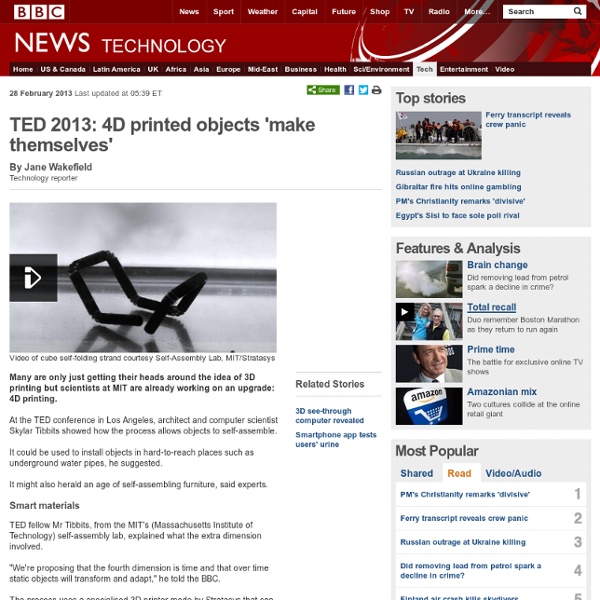 28 February 2013Last updated at 05:39 ET By Jane Wakefield Technology reporter Video of cube self-folding strand courtesy Self-Assembly Lab, MIT/Stratasys Many are only just getting their heads around the idea of 3D printing but scientists at MIT are already working on an upgrade: 4D printing. At the TED conference in Los Angeles, architect and computer scientist Skylar Tibbits showed how the process allows objects to self-assemble. It could be used to install objects in hard-to-reach places such as underground water pipes, he suggested. It might also herald an age of self-assembling furniture, said experts. Smart materials TED fellow Mr Tibbits, from the MIT's (Massachusetts Institute of Technology) self-assembly lab, explained what the extra dimension involved. "We're proposing that the fourth dimension is time and that over time static objects will transform and adapt," he told the BBC. The process uses a specialised 3D printer made by Stratasys that can create multi-layered materials.

Here's the 3D-printing institute in Obama's State of the Union A little over a year ago, 3D printing was a funky new technology that you might find at modestly sized booths in the basement level of the Las Vegas Convention Center at CES . Tonight, President Obama mentioned it in the same breath as Apple and Intel during his State of the Union address, while talking about ways to create new jobs and manufacturing in the United States. Here's the passage from the transcript: After shedding jobs for more than 10 years, our manufacturers have added about 500,000 jobs over the past three. Caterpillar is bringing jobs back from Japan. This giant 3D printer can construct a house in as little as 20 hours While 3D printing might be all the tech geek rage right now, the cooler story is what some people are doing with it to make an actual difference. We’ve seen stories of medical uses such as new 3D-printed limbs and that’s incredible but USC professor Behrokh Khoshnevis has just blown my mind. Imagine 3D printing on such a large scale, using a concrete-style material, that could “print” a house in as little as 20 hours. Oh, and that material can withstand over three times the PSI force of standard concrete walls. There can even be larger versions, with multiple “print heads” for use in construction of multi-family dwellings like apartment complexes. Professor Khoshnevis’ TEDx talk goes into more detail, so take a few minutes out of your day to appreciate science.

Blender dives into 3D printing industry Blender 2.67 was released last week with a 3D printing toolbox. LGW spoke to Dolf Veenvliet, Bart Veldhuizen (Shapeways, Blendernation), and Rich Borrett (Ponoko) about the new tools and the future of 3D printing. As one of the impressively fast growing industries, 3D printing is lately all the rage in the press. Let's start with the basics. What do we know about 3D printing anyway? Increasingly affordable (under $1000 now) desktop 3D printers make it possible to turn designs into real plastic or metal objects up to 30cm large in any dimension.

3-D Printed Car Is as Strong as Steel, Half the Weight, and Nearing Production Engineer Jim Kor and his design for the Urbee 2. Photo: Sara Payne Picture an assembly line not that isn’t made up of robotic arms spewing sparks to weld heavy steel, but a warehouse of plastic-spraying printers producing light, cheap and highly efficient automobiles. If Jim Kor’s dream is realized, that’s exactly how the next generation of urban runabouts will be produced. His creation is called the Urbee 2 and it could revolutionize parts manufacturing while creating a cottage industry of small-batch automakers intent on challenging the status quo. Urbee’s approach to maximum miles per gallon starts with lightweight construction – something that 3-D printing is particularly well suited for.

Online marketplace '3D Burrito' for 3D printed objects - find3dprinter An online marketplace for 3D printed designs hits the web. It’s called 3D burrito and it’s a place where people can buy and sell 3D designs made for 3D printers. It feels a bit like Shapeways, only 3D Burrito is more open source and focused on printing at home with your own 3D printer. Shapeways is more oriented on the whole solution, they offer a 3D printed product and mail it to your adress. Before the two founders (from Sweden) started the website 3D Burrito they where looking online for a Distributed Recycling of Waste Polymer into RepRap Feedstock Christian Baechler, Matthew DeVuono, and Joshua M. Pearce, “Distributed Recycling of Waste Polymer into RepRap Feedstock” Rapid PrototypingJournal Stucker, 2010; Petrovic, et al., 2010; Gebhardt, et al., 2010; Crane, et al., 2011). Recently an open source(OS) model, the RepRap, has been developed which can be built for under $1000, greatly expanding thepotential user base of rapid prototypers.

NASA proves 3D printing is headed to the stars 3D-printed space technology is no longer science fiction, as NASA and other space companies are making it a reality. Engineers and researchers at the Ames Research Center are already working with 3D printing technology to make it applicable for use in both space travel and the study of our universe, according to a recent CNET report. The potential for 3D printing on space travel is endless. The technology itself can theoretically allow structures like satellites and spacecraft to be built in space, and it’s being developed here on earth. One private company, Made in Space, is already piloting zero gravity 3D printing. It started testing in early 2011, and has made great strides in the future of out of this world 3D printing and design.

In Tomorrow's Wars, Battles Will Be Fought With a 3-D Printer Army Staff Sgt. Joshua Rucinski checks his 3-D printer at Joint Base Balad, Iraq on June 8, 2011. Less than two years later, an increasing number of military officers are saying this could change the way we fight wars. Photo: U.S. Scientists ‘print’ 3D object with stem cells By Agence France-PresseMonday, February 4, 2013 21:43 EDT Scientists on Monday said that for the first time they had printed 3D objects using human embryonic stem cells, furthering the quest to fabricate transplantable organs. Once fine-tuned, the technology should allow scientists to make three-dimensional human tissue in the lab, eliminating the need for organ donation or testing on animals, they reported. Human embryonic stem cells (hESCs) can replicate indefinitely and become almost any type of cell in the human body.

3-D printer going to space station in 2014 Made in Space Made in Space team members with their 3-D printer hang on during a Zero-G test flight. By Mike Wall, SPACE.com A 3-D printer is slated to arrive at the International Space Station next year, where it will crank out the first parts ever manufactured off planet Earth. The audacious plan to end hunger with 3-D printed food - Quartz Uber is slavery…Uber will add to traffic congestion…Uber destroys the savings of cab drivers… Hold the litany. Is this the incumbency speaking? And my name isn’t Marie Antoinette. I might get in trouble for this, but I’d like to add a drop of customer experience into the boiling broth of opinions about Uber. No warranties expressed or implied, my perspective is a limited one. After five decades of riding in taxis, both in my native Paris and my adopted Bay Area, I’ve had my share of interesting and sympathetic cabbies, most of whom are more than willing to share their life stories.

Mars-bound astronauts will print food & tools, NASA says NASA will transport 3D printers to space so astronauts can print tools — and potentially even food. NASA’s chief administrator Charles Bolden discussed the role of 3D printers during a recent press tour of the Ames Research Center. According to ComputerWorld, Bolden believes the technology could be “key,” particularly as the agency explores missions to Mars and beyond. “As NASA ventures further into space, whether redirecting an asteroid or sending humans to Mars, we’ll need transformative technology to reduce cargo weight and volume,” Bolden said. “In the future, perhaps astronauts will be able to print the tools or components they need while in space.”

3-D Printed Gun Only Lasts 6 Shots A group of 3-D printing gunsmiths have taken another step toward making a gun you can download off the internet. This weekend, the desktop weaponeers took a partially printed rifle out to test how long its plastic parts survived spewing bullets. The result?