Exploring the Culture of Technology 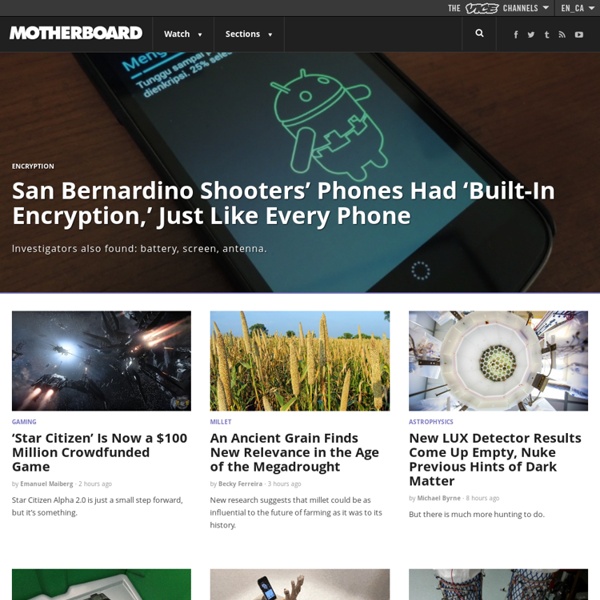 Neo Gothic Gothic Revival (also referred to as Victorian Gothic, Neo-Gothic or Jigsaw Gothic, and when used for school, college, and university buildings as Collegiate Gothic) is an architectural movement that began in the late 1740s in England. Its popularity grew rapidly in the early 19th century, when increasingly serious and learned admirers of neo-Gothic styles sought to revive medieval Gothic architecture, in contrast to the neoclassical styles prevalent at the time. Gothic Revival architecture often has certain features,derived from the original Gothic architecture style, including decorative patterns, finals, scalloping, lancet windows, hood moldings and label stops. Relation to other cultural movements[edit] The Gothic Revival was paralleled and supported by "medievalism", which had its roots in "antiquarian' concerns with survivals and curiosities.

Prometheus Movie Discussion Link to Timeline: Welcome to the most expansive timeline of the Alien films available. It is based on the four 20th Century Fox films: Alien, Aliens, Alien 3, and Alien Resurrection, their respective novelisations, and film production information from a variety of sources. It also includes some references from the Colonial Marines Technical Manual by Lee Brimmicombe-Wood. Dogon people The Dogon are an ethnic group living in the central plateau region of the country of Mali, in Western Africa, south of the Niger bend, near the city of Bandiagara, in the Mopti region. The population numbers between 400,000 and 800,000.[1] The Dogon are best known for their religious traditions, their mask dances, wooden sculpture and their architecture. The past century has seen significant changes in the social organization, material culture and beliefs of the Dogon, partly because Dogon country is one of Mali's major tourist attractions. A Dogon hunter

Francois Boucher Portrait of Marie-Jeanne Buzeau (1716-1796) by Alexander Roslin. Boucher married Buzeau in 1733 and they had three children together. François Boucher (French pronunciation: ​[fʁɑ̃swa buʃe]) (29 September 1703 – 30 May 1770) was a French painter in the Rococo style. Jane Austen’s Contemporaries - Regency Reader Janeites and hist-ro fans undoubtedly have wished at least once (if not many, many times) that there were more Austens to read and absorb, to soak in during a long hot soak, to curl up to at bedtime. And almost having exhausted Heyer’s most excellent body of hist-ro works, I began to seriously wish this yet again. So after a troll, here is the wonderful world of Jane Austen’s contemporaries now just a click away. Frances Burney penned several well received novels, including Evelina, Cecilia and Camilla recommended for lovers of Jane.

The Legendary Jens Risom Shows Off His Hidden Prefab Beach Home Most of us know Jens Risom as the Danish furniture designer who, at the tender age of 26, cofounded Knoll Furniture Company with the titular Hans. From his perch at Knoll--and later from his own firm, JRD--Risom popularized midcentury modern design in America (his chairs sat in the Oval Office for a time in the 1960s). Risom’s legacy as a furniture designer has blossomed over the past decade, thanks in part to shelter magazines like Dwell, which has single-handedly rekindled popular interest in midcentury design. But in the magazine’s November issue, Amanda Dameron features Risom in a lesser-known role: the architect.

Sweet Station Zemer Peled Peled was born and raised in a Kibbutz in the northern part of Israel. After completing a BA (Hons) at the Bezalel Academy of Art and Design in Jerusalem she graduated with an MA (Hons) from the Royal College of Art. In recent years her work has been featured nationally and internationally in museums and galleries including Sotheby’s and Saatchi Gallery-London, Eretz Israel Museum-Tel Aviv and the Orangerie du Senate, Paris among others. Some Came Running So. A couple of months, or weeks, or something, ago—my sense of time grows simultaneously more compressed and expanded as I grow older—someone on social media asked me where I ranked Bond movie X, and it reminded me that a few years back I labored somewhat mightily for my then-freelance-client, an entity called MSN Movies, on a lengthy piece in which I ranked the Bond pictures. That piece, published in annoying multi-click "gallery" form, has been purged from what is left of the MSN website, along with pretty much everything else I did for it. Fortunately, or unfortunately, I've been keeping my original submitted versions of much if not all of my work for my freelance clients backed up. So I thought, well, now that Spectre's coming out, everybody else is ranking the Bond films, why shouldn't I get some of that Secret Agent Traffic? It’s the 50th anniversary…not of James Bond himself, who was invented by author Ian Fleming in 1953.

The Propaganda Posters of the 1% Banks and governments own all the money and power thus controlling society and they will do absolutely anything to keep it that way, To top it off we are now paying off there huge debt again, as planned -not a mistake. To be honest I have very little hope for society especially when people are trying to do something about this whether it the right way or not but still trying, only to be met with total denial from all sides. As history has has told us, people only do something when its all or nearly too late and we are close to that point and even have an opportunity that will soon be gone. I consider the polar bear already extinct and in some ways I don’t think people even deserve the polar bear. Early Christian art and architecture Early Christian art and architecture (or Paleochristian art) is the art produced by Christians or under Christian patronage from the earliest period of Christianity to, depending on the definition used, some time between about 350 and 525. In practice identifiably Christian art only survives from the 2nd century onwards.[1] After 550 at the latest, Christian art is classified as Byzantine, or of some other regional type.[2] It is hard to know when distinctly Christian art began. Prior to 100, Christians may have been constrained by their position as a persecuted group from producing durable works of art. Since Christianity was largely a religion of the lower classes in this period[citation needed], the lack of surviving art may reflect a lack of funds for patronage, and simply small numbers of followers. Early Christians used the same artistic media as the surrounding pagan culture.

Best of 2013 This year has been a strange one for me; but considering that last year I didn't even get around to putting together an end-of-year summary, I guess all's well that ends well... I've been leafing through my entire year of blogging last night, trying to gain an outside perspective on my creative olfactory life, and my conclusion is: 2013 was the year of the forest! I've spent more time than usual (though still not enough) in the woods, finding inspiration in the scents as well as the resilience and grounded stability of the thriving trees. Decidedly I was not going to launch any new perfume in 2013. It was a year when I would concentrate on maintaining what I have and strengthen my brand.

Open Learning Initiative At Harvard Extension School, free and open learning is hardly a new concept. In fact, the Extension School was founded with this mission in mind: to create an affordable way for any motivated student to take courses at Harvard. We stay true to this mission today, offering several free courses and nearly 800 for-credit courses at reasonable tuition rates. Explore our series of free or low-cost courses below.