Characters - The Attributes of Age 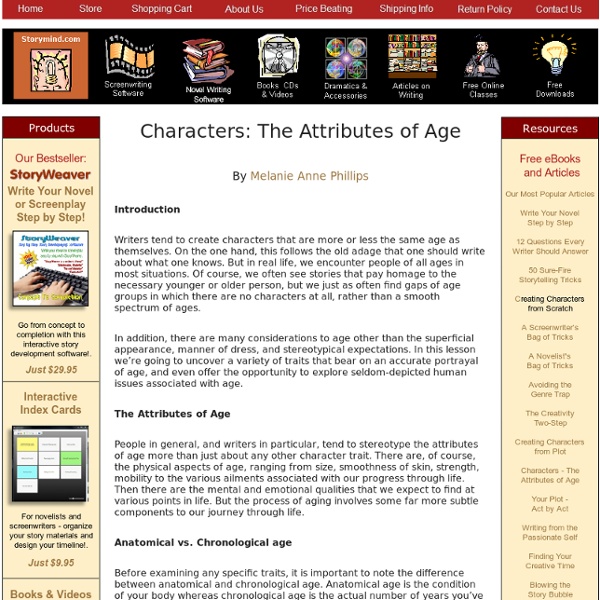 Characters: The Attributes of Age By Melanie Anne Phillips Introduction Writers tend to create characters that are more or less the same age as themselves. In addition, there are many considerations to age other than the superficial appearance, manner of dress, and stereotypical expectations. The Attributes of Age People in general, and writers in particular, tend to stereotype the attributes of age more than just about any other character trait. Anatomical vs. Before examining any specific traits, it is important to note the difference between anatomical and chronological age. Jargon Far too often, characters are portrayed as speaking in the same generic conversational language we hear on television. Characters, therefore, tend to pick up a basic vocabulary reflective of both their ethnicity AND their age. Outlook Speaking of character minds, we all have a culturally created filter that focuses our attention on some things, and blinds us to (or diminishes) others. Comfort Symbols Conclusion? Related:  Character Development, templates, traits, character types

Body Language Basics - Syncrat Publishing Throughout history it has been an advantage if an individual can read body language. Body language helps in everyday life from closing a business deal or trusting someone with your life, to recognising when someone is upset. Body language is the art of making an educated guess at a person’s feelings or intentions based on their posture, movement and positioning. Each action or stance in the following list means very little, unless there is more than one indicating the same thing. Arms Feet Head Chest Other

Mary Sue Test Background A Mary Sue is an unrealistic type of literary character commonly created by inexperienced authors. Although they vary, a typical Mary Sue has an unreasonable number of cool or special traits, especially ones the author wishes he or she had, and they tend to accomplish things too easily, solve problems too neatly, and become the center of attention whether they deserve it or not. This test aims to help authors evaluate whether their characters are in danger of becoming Mary Sues by drawing attention to potentially problematic traits. However, authors should remember that a Mary Sue is a subjective classification. There is no such thing as a "Mary Sue trait"; any trait can be part of an interesting, well-balanced character. When taking this test, be honest, but keep it in perspective and remember context. The test has seven sections: This test comes from this thread in the Writer's Block subforum on TV Tropes. Section 1: Author Avatars Scoring 1-10: Your character is understated.

Character Trait Chart Character Trait Chart and Personality Components It can sometimes be helpful to make a Trait Chart for each character. This is especially helpful during the early stages of character development, before the character becomes as real to you as your mother. There are several charts of this sort available, some extremely detailed and some containing only facts and figures. To use this chart, print it out and make a copy for each of your characters. Full name - a character's name is very important. Besides the character's official name, we also need to know what he is called (and, perhaps, what he prefers to be called). Date of Birth/Age - we should carefully consider assigning our character a birthday. Address - this can be as detailed or as vague as you wish, but it should answer a few questions: does the character live in a large city, the suburbs, a small town or deep in the country? Height - this doesn't need to be specific. Smell - everyone has a smell. Questions? Custom Graphics by:

Common, Yet Terrible Character Descriptors - And How To Fix Them When asked to describe their characters, many people tend to use the same over-generalized descriptors over and over. The result tends to be what I call a "Forer profile" - it's so vague that it can fit any number of characters - all of whom are wildly different - equally well. And when the same character description could fit a sneaky trickster as it could a determined soldier as it could a grad student opening a florist's shop, that's a problem. So, I'm going to outline how to give more and better information on your character to give people a better idea of what sort of person they're reading about. For the sake of simplicity, we'll go with "animals" for most of this particular section. Here are other examples of useful statements: "My character volunteers at the animal shelter."" All of the above statements are only a few words longer than "my character loves animals," but contain huge amounts of information in comparison. Fun is entirely subjective.

Ash’s Guide to RPG Personality & Background :: The Guide So You Wanna Write/Play A Powerful/Talented Character That Probably Won't Be Perceived As A Mary Sue? Many, many, many times I've seen people complain that they can't write or play powerful characters without these characters being labelled as Mary Sues. I really have only one thing to say to this: it's probably either because your characters are Mary Sues, or because you're presenting your character the wrong way. Sure it's not the former? Okay, then let's get on to how you can present your character so people probably won't grab the torches and pitchforks. This article is largely intended for fan characters, though most of it applies to other character types as well. Start by describing what makes your character tick, not what makes xir special. When you begin your character profile/pitch, leave out your character's appearances, superpowers, and canon connections as long as you possibly can. If you have a well-developed character, you should be able to describe xir without mentioning xir powers, abilities, or canon connections quite easily. Remove irrelevant specialness.

Introducing Characters - First Impressions Introducing Characters - First Impressions by Melanie Anne Phillipscreator StoryWeaver, co-creator Dramatica When your reader/audience first meets your characters in a story, it has the same effects as when you are introduced to someone in real life. First impressions have a tremendous impact that you can use either to establish or mislead your reader/audience as to the true nature of each character. You might tell your reader/audience all there is to know about a particular character right up front. But for another character, you may drop little bits of information over the whole course of the story. Then there is the question of who shows up first? Who is your Main Character? You know all about your characters while your audience knows nothing. Sometimes an author may want to have a character with a dark side, or a hidden side that will be revealed only later in the story. *Try either or both for 90 days.

Writing Characters | Creative Writing Course In this fifth session in my free creative writing course, we will be looking at writing characters. In creative writing we become, in a way, like God. In short stories, novels and poems, we construct a world then fill it with people who take on a life of their own. Iris Murdoch described a novel as ‘a fit house for free characters to live in’. How far a literary construct can have free will is an ongoing philosophical debate; more pertinent to writers is whether plot should follow character or the other way around. Character, Plot and Message There are three kinds of stories: those that start from character, from plot or from message. A message-driven story is one where a writer starts with an idea or theme (enviromentalism, religion, anti-war etc) then crafts a plot and populates it with types who will best illustrate the message. A character-based story is when the characters are so memorable and well-drawn that the story would not exist without them. Starting from Character Motivation

How Not To Write Female Characters There are already a lot of articles around on how to write female characters. That’s all well and good, but I think it’s a lot less restrictive to have an itemized list of things you shouldn’t do. It also might be easier to digest than lengthy essays. Also, this list is intended for people with more testosterone, but since I’ve seen young female authors screw up their own young female protagonists, estrogenites are perfectly allowed to read this too. Like all my advice, this is subjective, in no particular order, and should be taken with a small pile of grains of salt. I’m going to assume you’re taking your work seriously and expect your readers to do the same. Female characters should be characters first and female second. Some examples of good female characters Hermione Granger (Harry Potter series). I could keep going, and I could pick more and more nits, but I think the above is sufficient for now. Leave comments okay I will give you friendship cookies nomnomnom good.

How to Write Characters Try Dramatica & StoryWeaver Risk Free* *Try either or both for 90 days. Not working for you? Return for a full refund of your purchase price! About Dramatica and StoryWeaver Hi, I'm Melanie Anne Phillips, creator of StoryWeaver, co-creator of Dramatica and owner of Storymind.com. What They Do Dramatica is a tool to help you build a perfect story structure. How They Do It Dramatica has the world's only patented interactive Story Engine™ which cross-references your answers to questions about your dramatic intent, then finds any weaknesses in your structure and even suggests the best ways to strengthen them. StoryWeaver uses a revolutionary new creative format as you follow more than 200 Story Cards™ step by step through the story development process. How They Work Together By itself Dramatic appeals to structural writers who like to work out all the details of their stories logically before they write a word. Try Both Programs Risk Free! We have a 90 Day Return Policy here at Storymind.