5 Coding Challenges to Help You Train Your Brain 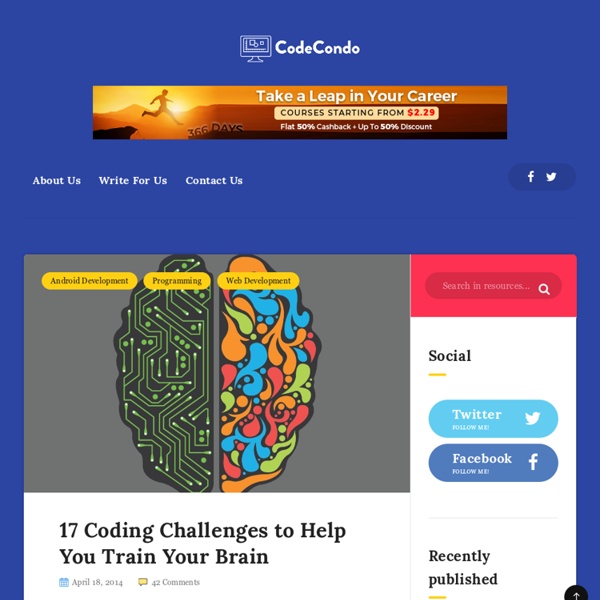 Programming is becoming an essential part of nearly every industry known to man, the way it helps to organize and maintain large systems is not possible to compare to anything else, and so more and more people begin their journey. You can learn to code both from interactive platforms and also from books – whichever you find most appropriate and easy to learn from. But, sometimes that’s not good enough, and we want to practice new things. Coding is a lot about creativity, your ability to come up with new and interesting ideas; but sometimes, due to a large amount of time spent tackling common problems, we forget about creativity. We could say that coding challenges are great for: learning new ways of doing thingspracticing a new programming languageencountering critical problem solvingkeeping our brain sharp and focusedhaving fun! 1. You get to earn real money, and it’s supported by a community of nearly a million coders, so I’m pretty sure there is a lot of challenging stuff to encounter.

Mind Uploading: Brain Facts What's the scale of things here? The following lengths (from Posner p. 305) give approximate sizes for structures in the nervous system: 0.001 mm: synapses (tip of a connection between neurons) 0.1 mm: neurons (brain cell) 1 mm: local circuits (small networks of cells) 10 mm: maps (spatially organized topographic maps) 100 mm: systems (e.g., the visual system) 1000 mm: the central nervous system (including spinal cord) How many things are we talking about? Short answer: a LOT. Long answer: Per cubic millimeter (mm^3), there are about 10^5 neurons and 10^9 synapses. How fast does the brain work? Not very fast by computer standards. How are memories stored in the brain? This is one of the great questions of neuroscience, and research has nearly converged on an answer. OK, so neurons and connections, is that it? Well, there's more in the brain than that. More Brain Facts and Figures are available from the University of Washington.

jEdit - Programmer's Text Editor - overview 3 World Wars Planned by Illuminati Albert Pike in 1871 - Everything About NWO | Humans Are Free This letter graphically outlined plans for three world wars that were seen as necessary to bring about the One World Order, and we can marvel at how accurately it has predicted events that have already taken place. It is a commonly believed fallacy that for a short time, the Pike letter to Mazzini (33 rank mason who founded the Mafia in 1860) was on display in the British Museum Library in London, and it was copied by William Guy Carr, former Intelligence Officer in the Royal Canadian Navy.The British Library has confirmed in writing to me that such a document has never been in their possession. Furthermore, in Carr's book, Satan, Prince of this World, Carr includes the following footnote: "The Keeper of Manuscripts recently informed the author that this letter is NOT catalogued in the British Museum Library. It seems strange that a man of Cardinal Rodriguez's knowledge should have said that it WAS in 1925". In 1785, Restif coined the phrase four years before revolution broke out.

Website Builder by Easy WebContent - Easily build a website Add Great Features to your Website! Content is what connects you to your visitors and sparks their interest. We have you covered with every tool you need to easily and quickly populate your site with your own content. Type or paste text into placeholder content blocks, drag in photos, icons, movies, social features and go a step further with our exclusive Easy WebContent Add-ons! Text It's like having a word program inside the Site Builder. Photos and Icons It's as if we put photoshop inside the Site Builder. You are in charge of your images. Widgets Add everything from social widgets, maps, and interactive features to your pages. Special Add-ons Take advantage of our Add-on series, exclusive only to Easy WebContent system users! Give your website some awesome features!

National Review Online | Print America is unraveling at a stunning speed and to a staggering degree. This decline is breathtaking, and the prognosis is dim. For starters, Obama now rules by decree. “That’s the good thing about being president,” Obama joked on February 10. That very day, Obama decreed that the Obamacare mandate for employers with 50 to 99 workers would be postponed until 2016 (beyond an earlier extension to 2015), well past the November 2014 midterm elections. So, by fiat, Obama has postponed the employer mandate. Also by decree last week, Obama decided unilaterally to soften political-asylum rules. Meanwhile, the Justice Department is working hard to revoke the asylum of and deport the Romeikes. So, Obama believes, those who are only somewhat helpful to deadly, anti-U.S. terrorists may become Americans, while religiously oppressed homeschoolers who face prison should get the hell out. The transparent electoral motive that fuels so many of Obama’s executive orders seems unprecedented. Chilling.

Pixel Press Floors - Pixel Press | Draw your own video game. > Pixel Press Floors app – You’ll need an iPad to “Create-from-Paper” and play – and you can create directly in the app just like you would on paper using touch or a stylus with our “Draw-In-App” tools. > Paper, Pencil & our Sketch Guide (optional) – Print the free Sketch Guide at home (visit projectpixelpress.com to download the PDF) and take a picture of what you create with your iPad’s camera. The glyphs you draw (for example an “x” is a spike and a “+” is a coin) are transformed into gameplay objects. From there you can apply a design to the element, test it, and play it. It’s that simple, and once you learn the glyphs, you’ll be creating like a pro. Full instructions on how to create can be found in our Sketch Guide and How-to Videos at projectpixelpress.com. iOS 7.0+ iPad 2, iPad 3, 4 and 5 (Air), iPad Mini, iPad Mini with Retina – supports “Create-from-Paper”, “Draw-in-App” and “Arcade” play. iPhone 4s, 5 & 5s, 5c, iPod Touch 5th gen – “Arcade” play only.

Psychoactive Vaults : A Guide to Psychedelics Although every effort has been made to compile accurate information, the reader is warned that factual errors may be present. Only the legal information is specific to the United Kingdom. Apologies for the representation of chemical structures being limited to ASCII. Feel free to distribute this file or copy in it any form whatever. INTRODUCTION This file gives practical information about using a class of drugs most commonly known as the 'psychedelics' by their advocates (of which I am one) or, more pejoratively, as the 'hallucinogens'. More recently some Americans have suggested 'entheogens' or 'empathogenes' (the later specifically for the new drugs such as MDMA) as new names unblemished by association with the drug sub-culture, which emerged in the advanced world, most notably in California, in the late 1960s. These drugs are not generally habit-forming and many have been used for centuries in many different countries and cultures for religious purposes. LSD ( 'Acid' ) '...