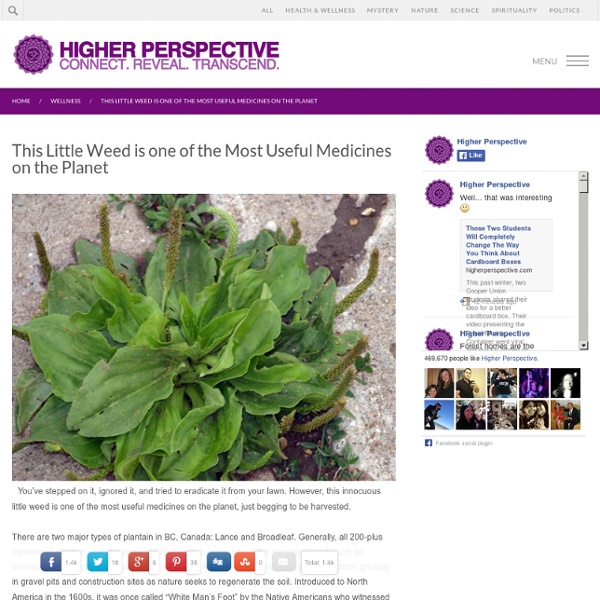 You’ve stepped on it, ignored it, and tried to eradicate it from your lawn. However, this innocuous little weed is one of the most useful medicines on the planet, just begging to be harvested. There are two major types of plantain in BC, Canada: Lance and Broadleaf. Generally, all 200-plus varieties of plantain yield the same results. It grows especially well in poor, rocky soil (such as driveways) and is often seen alongside dandelion. More often than not, you will see plantain growing in gravel pits and construction sites as nature seeks to regenerate the soil. Plantain has often been the go-to remedy for hikers plagued by mosquitos. Plantain is renowned for its healing effect on the digestive system. Because plantain is a gentle expectorant and high in silica, an infusion can be helpful for lung problems, coughs, and colds. Resources: - Prescription for Herbal Healing: 2nd Edition – Phyllis A. About The Author Related:  researchgroup • Natural Remedies

Ginger destroys cancer more effectively than death-linked cancer drugs Share Ginger, a cousin spice of super anti-cancer substance turmeric, is known for its ability to shrink tumors. Astoundingly, it is even more effective than many cancer drugs, which have been shown to be completely ineffective and actually accelerate the death of cancer patients. Commonly consumed across the world in small doses among food and beverage products, the medicinal properties of ginger far surpass even advanced pharmaceutical inventions. The subject of one study based out of Georgia State University, whole ginger extract was revealed to shrink prostate tumor size by a whopping 56% in mice. It turns out that cancer drugs are not only severely ineffective at permanently shrinking tumors, but they actually make tumors larger and kill the patient more quickly. “Whatever manipulations we’re doing to tumors can inadvertently do something to increase the tumor numbers to become more metastatic, which is what kills patients at the end of the day,” said study author Dr.

10 Ways To Keep Your Diet GMO-Free Share by Julie Taylor – Upwave.com It seems like everyone is talking about the dangers of genetically modified organisms (GMOs) these days. But what are GMOs exactly? They’re the result of a laboratory process that inserts genes from one species into the genes of another to obtain a desired trait or characteristic (e.g., fast-growing salmon). 1. 2. 3. 4. 5. 6. 7. 8. 9. 10. Does all this GMO talk stress you out?

Shroomery - Magic Mushrooms (Shrooms) Demystified The Five Healthiest Backyard Weeds Do you have the summer gardening blues? Has the heat wave turned your cucumbers vines into rope and left your tomatoes as brown as the cracked dirt they're growing in? Fear not. You likely have weeds in your garden or in your neighborhood that are striving in the heat and are actually far more healthful than almost anything you can grow or buy. Far from famine food, these so-called weeds can be delicious if prepared properly. Just a few words of caution: Be sure to identify the weed properly. Got your garden gloves? Common dandelion from upstate New York.Credit: UpStateNYer Dandelion: Dandelion is one of the healthiest and most versatile vegetables on the planet. The leaves are most tender, and tastiest, when they are young. You can eat the bright, open flower heads in a lightly fried batter. Purslane: If you've ever lived in the city, you have seen good ol' Portulaca olearacea, or common purslane. You should keep a few things in mind, though, before your harvest. Lamb's-quarters: Plantain

Train in Alabama oil spill was carrying 2.7 million gallons of crude - Los Angeles Times A train that derailed and exploded in rural Alabama was hauling 2.7 million gallons of crude oil, according to officials. The 90-car train was crossing a timber trestle above a wetland near Aliceville late Thursday night when approximately 25 rail cars and two locomotives derailed, spilling crude oil into the surrounding wetlands and igniting a fire that was still burning Saturday. Each of the 90 cars was carrying 30,000 gallons of oil, said Bill Jasper, president of the rail company Genesee & Wyoming at a press briefing Friday night. It’s unclear, though, how much oil was spilled because some of the cars have yet to be removed from the marsh. “Most of the cars did not spill all of the product that was inside it,” Don Hartley, a regional coordinator for the Alabama Emergency Management Agency, told the Los Angeles Times. Emergency responders have to wait until the fire has burned out, Hartley said. The cause of the crash is under investigation, and will probably take weeks to determine.

CDC's Own Data: Vaccine-Infant Death Link Sayer Ji, Green Med InfoWaking Times The CDC’s own research has found that the long denied vaccine-SIDS link is real. If you believe the official pronouncements of top governmental health agencies like the CDC and FDA, all the vaccines in the present day schedule are a priori safe and effective. Not only are you told that they can’t harm you, but that not taking them can kill you. Parents are under even more pressure. But what happens when the actual evidence from the scientific and clinical literature produced by these very agencies contradicts their own vaccine policies? This is exactly what has happened with the publication of a new study in the Journal of Pediatrics titled ,”Adverse Events following Haemophilus influenzae Type b Vaccines in the Vaccine Adverse Event Reporting System, 1990-2013,” wherein CDC and FDA researchers identify 749 deaths linked to the administration of the Hib vaccine, 51% of which were sudden infant death linked to the administration of Hib vaccine.

11 Health Benefits of Dandelion and Dandelion Root - Sunwarrior News 11 Health Benefits of Dandelion and Dandelion Root 4.30/5 (85.94%) 774 votes Dandelion is most often thought of as a pesky weed that takes over in lawns, gardens, meadows, and even pops up in cracked sidewalks and pavement. It is invasive and pervasive. Lucky for us, it is also an excellent food and herbal medicine that anyone can find, grow, and put to use. Dandelion is a very rich source of beta-carotene which we convert into vitamin A. This flowering plant is also rich in vitamin C, fiber, potassium, iron, calcium, magnesium, zinc, and phosphorus. Seeds grow readily in your garden, planter boxes, or pots. Digestive Aid – Dandelion acts as a mild laxative that promotes digestion, stimulates appetite, and balances the natural and beneficial bacteria in the intestines. Kidney – This weed-like superfood is a diuretic that helps the kidneys clear out waste, salt, and excess water. Cancer – Dandelion acts against cancer to slow its growth and prevent its spread. About Charlie Pulsipher

Solar-Powered 3D Printer Turns Desert Sand Into Glass Bowls And Sculptures The sun’s rays can be harnessed to power everything from homes to gadgets, but one graduate student is using the sun to create a super-printer capable of printing elaborate glassware. Markus Kayser took his graduate project all the way to the sands of the Sahara in Egypt to create his innovative idea dubbed the ‘Solar Sinter’. The incredible design uses a 3D digital printer and the sun’s rays to turn the sand into incredible glass bowls and sculptures that are out of this world. The Solar Sinter is made up of seven stations: a photovoltaic panel, the focal point for drawing the sun’s rays, a sun tracker, fresnel lens (for magnifying the rays), a battery, controlling electronics, and finally a silver tent dubbed the “office,” where Kayser can shield himself from the hot sun, while monitoring the process. Dragging the mini-station far into the desert, Kayser utilizes the abundant natural energy. Credits: Written by Lori Zimmer of www.inhabitat.com

Ibuprofen tested as a coronavirus treatment Image copyright Getty Images Scientists are running a trial to see if ibuprofen can help hospital patients who are sick with coronavirus. The team from London's Guy's and St Thomas' hospital and King's College believe the drug, which is an anti-inflammatory as well as a painkiller, could treat breathing difficulties. They hope the low-cost treatment can keep patients off ventilators. In the trial, called Liberate, half of the patients will receive ibuprofen in addition to usual care. The trial will use a special formulation of ibuprofen rather than the regular tablets that people might usually buy. Studies in animals suggest it might treat acute respiratory distress syndrome - one of the complications of severe coronavirus. Prof Mitul Mehta, one of the team at King's College London, said: "We need to do a trial to show that the evidence actually matches what we expect to happen."

Amazing Herb Kills 98% Of Cancer Cells In Just 16 Hours Taking in consideration it is one of the deadliest diseases, scientists constantly try to find a cure and finally put and end to cancer. This herb is one of those cures and it can kill up to 98% of cancer cells in just 16 hours. Namely, according to the researches published in “Life Science”, artemisinin, a “Sweet wormwood” or “Artemisia Annua” derivative, was used in Chinese medicine and it can kill 98% of lung cancer cells in less than 16 hours. The herb used by itself reduces lung cancer cells up to 28%, but in combination with iron, “Artemisia Annua” successfully and completely “erases” cancer, and in the experiment this herb had no impact on healthy lung cells. Artemisinin in past was used as a powerful antimalarial remedy, but now it is proven that this cure is also effective in the fight against cancer. Iron deposits in cancer cells with special receptors which help in cell division. Credits: Doctor Saputo & Healthy Food House Related:

These 50 Photos From The Past Are Shocking And Hilarious. I Can't Believe How Things Have Changed... These photographers may have never known the significance of the pictures they took and that millions would be marveling at them in the future. From thousands of images, I chose these to give us a rare and fascinating look at how different (and similar) life used to be. hyperallergic.com Robert Cornelius took this photo outside the store his family owned. This may very well be the most kings ever photographed at once. Suits were not allowed to end more than 6 inches above the knee. The Afghanistan government was shifting towards democracy in the 1950s and 60s before the Taliban took over. This Japanese machine meows times per minute to scare away rats and mice. Although we did everything differently back then, these photos also show that deep down, raw human spirit never changes. And I can only imagine what photos we're taking in 2014 will be studied 200 years in the future...