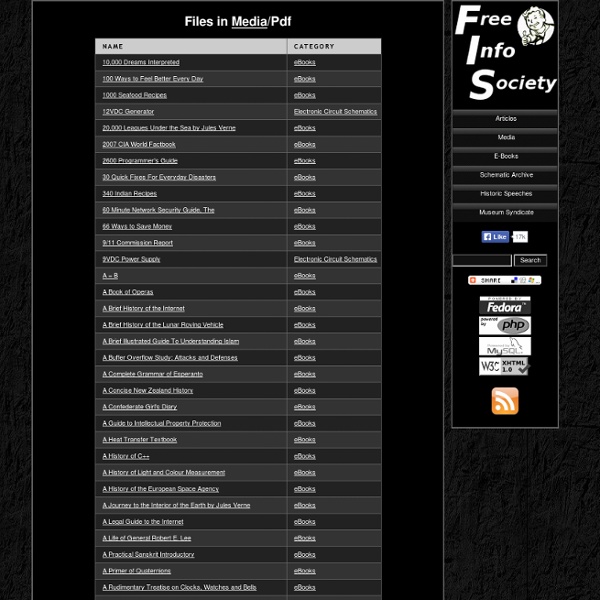 How to make a tool set Life without tools is barbaric. But even simple tools can be expensive in rural parts of developing countries. Import duties bump the costs up higher than they are in the States or elsewhere, and sometimes only low-quality brands are available anyway. So, to hold off future barbarians, we'd like to show how to build a simple tool set on a very low budget. Larry Bentley, the man who figured out how to make these tools, said a wise thing: "Without tools, kids don't take stuff apart, and without taking stuff apart, you don't learn how things work." Free Book Search Free Book Search's document search tool is designed to return the maximum number of online documents from specific types of websites as per the users' choice. We have made this search portal very robust so that using the tools on this page, if a document exists somewhere - even hidden away - on the Internet, you will find it here. This is one of the only online tools that will actually find books and documents on non-book sites. Most other tools sift through digital libraries or known locations of e-books and documents, our searches also scan private collections that are normally hidden. There are a few methods for finding documents, and we have tried to incorporate all of them in one place by using the 'radio buttons'.

Survival Food 101: Hardtack - Survival Life Pilot bread, ship’s biscuit, shipbiscuit, sea biscuit, sea bread , “dog biscuits”, “tooth dullers”, “sheet iron”, “worm castles” or “molar breakers”. Hardtack has had many different names throughout the years but its importance has never changed. Hardtack has actually been around since the time of Egyptian Pharaohs, but if you have heard of it, you probably know it better from the Civil War period. During the war, squares of hardtack were shipped to both the Union and Confederate armies, making a staple part of a soldier’s rations. Typically made 6 months beforehand, it was as hard as a rock when it actually got to the troops.

How to Break Open a Safe? How to break open a safe is usually a question only thieves and locksmiths think about. Anyone looking at purchasing a safe should be thinking about this question too. No, you won’t be breaking into a safe, but you want to keep the burglars from breaking into yours. With just a little knowledge, you can protect yourself and your belongings from even the most sophisticated burglar. Here are some things to keep in mind when purchasing a safe: Survival Gardening Survival gardening can provide fresh food for you and your family in the aftermath of a disaster. Disasters can occur at anytime and anywhere, and take many forms. Not all disasters are dramatic and natural.

Our Simple DIY Home Solar Power System Bringing some of the benefits of electrical power to our off-grid home has been a hit-or-miss affair. Over the years we’ve tried some very simple approaches to lighting and small battery recharging for our flashlights, such as hauling a 12 volt car battery to a small rural school about a half mile away every time it needed to be topped up. This was time consuming and inefficient. But we didn’t want to lose the feel of our simple home by bringing in a large generator and the jugs of gas needed to run it, and the prospect of setting up a wind turbine or solar array seemed expensive and a technological eyesore in a natural setting.

Skepticism Skepticism or scepticism (see American and British English spelling differences) is generally any questioning attitude towards knowledge, facts, or opinions/beliefs stated as facts,[1] or doubt regarding claims that are taken for granted elsewhere.[2] Philosophical skepticism is an overall approach that requires all information to be well supported by evidence.[3] Classical philosophical skepticism derives from the 'Skeptikoi', a school who "asserted nothing".[4] Adherents of Pyrrhonism, for instance, suspend judgment in investigations.[5] Skeptics may even doubt the reliability of their own senses.[6] Religious skepticism, on the other hand, is "doubt concerning basic religious principles (such as immortality, providence, and revelation)".[7] Definition[edit] In ordinary usage, skepticism (US) or scepticism (UK) (Greek: 'σκέπτομαι' skeptomai, to think, to look about, to consider; see also spelling differences) refers to:

9 Steps To Starting A Survival Garden In a time of economic uncertainty and rising food prices, it it always a good idea to have a garden to provide extra food for you and your family. Besides providing a source of food in an emergency, a garden is also a great source of wonderful vegetables which are MUCH healthier to eat than most of the food you can get at the supermarket. So how do you begin? How I built an electricity producing Solar Panel Several years ago I bought some remote property in Arizona. I am an astronomer and wanted a place to practice my hobby far away from the sky-wrecking light pollution found near cities of any real size. In my attempt to escape city slicker yuppies (you know the kind, the ones that like to blab loudly on their cell phone while they work on some business administration degree in a cyber cafe somewhere in Trendyland.) and their light pollution, I found a great piece of remote property. The problem is, it's so remote that there is no electric service available.