Geek to Live: Roll your own timeline 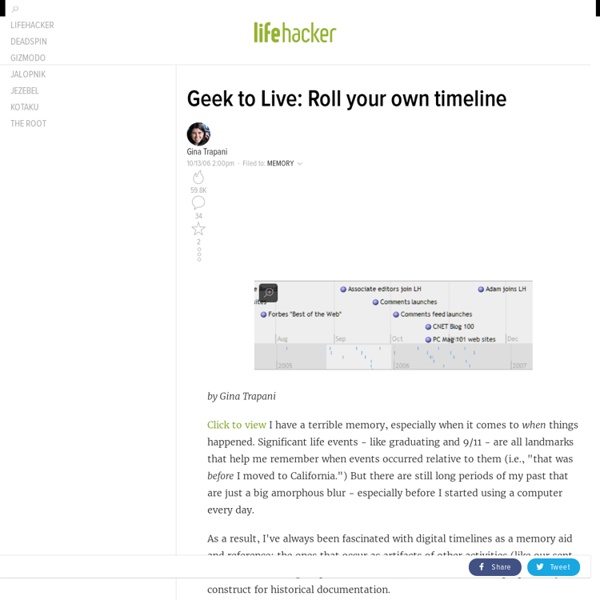 Beautiful Word Clouds Não Salvo Kodu Kodu is a new visual programming language made specifically for creating games. It is designed to be accessible for children and enjoyable for anyone. The programming environment runs on the Xbox, allowing rapid design iteration using only a game controller for input. Programming as a Creative Medium The core of the Kodu project is the programming user interface. The Kodu language is designed specifically for game development and provides specialized primitives derived from gaming scenarios. Key Features Kodu provides an end-to-end creative environment for designing, building, and playing your own new games. High-level language incorporates real-world primitives: collision, color, visionUses Xbox 360 Game Controller for input — no keyboard requiredRuns on XBox 360 and PCInteractive terrain editorBridge and path builderTerrain editor - create worlds of arbitrary shape and size20 different characters with different abilities

Mind Mapping A mind map is a diagram used to visually organize information. A mind map is hierarchical and shows relationships among pieces of the whole.[1] It is often created around a single concept, drawn as an image in the center of a blank page, to which associated representations of ideas such as images, words and parts of words are added. Major ideas are connected directly to the central concept, and other ideas branch out from those. Mind maps can be drawn by hand, either as "rough notes" during a lecture, meeting or planning session, for example, or as higher quality pictures when more time is available. Mind maps are considered to be a type of spider diagram.[2] A similar concept in the 1970s was "idea sun bursting".[3] Origins[edit] The semantic network was developed in the late 1950s as a theory to understand human learning and developed further by Allan M. Popularisation of the term "mind map"[edit] Mind map guidelines[edit] Buzan suggests the following guidelines for creating mind maps:

Insoonia - Em pé sem cair deitado sem dormir! LOTR Timeline Graph The ever-hilarious xkcd featured a comic which was very much a visualization. It was a chart showing the interactions between characters from a handful of movies. The comic was the kick I needed to do a quick experiment with timeline-based graph visualizations. Here's the result. It's a bit of a mess, but what I've done is synchronize three components: a slider, the original comic from xkcd, and the graph visualization. As time passes (or unpasses), the graph automatically shifts to reflect the data for the current time step. There's a lot more work that could be done to make the changes more obvious and less disorienting. ".. and you add places as they appear in groups .. geography reversed" I had a quick back and forth with Dr. The comic's visualization was portraying character interactions but since they didn't have phones in middle earth, it wasn't too hard to associate these interactions with locations. <div class="disqus-noscript"><a href="

MTV Geek | MTV.com - Comic Books News, Toy News, Tech News, Animation, Video Interviews, Reviews Network Visualization Immersion by the MIT Media Lab is a view into your inbox that shows who you interact with via email over the years. Immersion is an invitation to dive into the history of your email life in a platform that offers you the safety of knowing that you can always delete your data.Just like a cubist painting, Immersion presents users with a number of different perspectives of their email data. It provides a tool for self-reflection at a time where the zeitgeist is one of self-promotion. It provides an artistic representation that exists only in the presence of the visitor. The base view is a network diagram where each node represents someone you've exchanged email with. We've seen views of our inbox before and they usually just show simple time series charts and people who you email most.