Map of the Internet 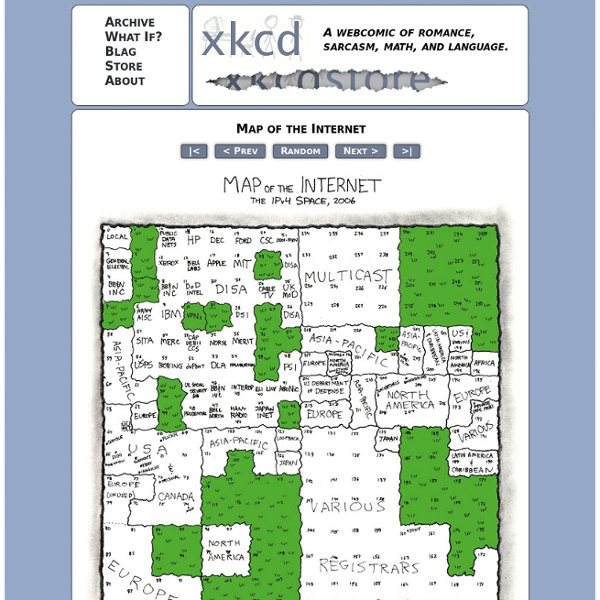 Historical - Maps and Atlases - ResearchGuides at Humboldt State University Searching the HSU Library Catalog For historical maps and atlases in the HSU Atlas and Map Collection check the HSU Library Catalog under the subjects geography-ancient-maps or historical geography-maps for world maps and atlases and [name of country, state, or region]-historical geography-maps for specific areas. Internet Guides and Directories Historic Map Index (Broer Map Library) Index to over 60,000 online historical maps available from 25 major map collections.Historic Maps (About.com Guide to Geography) Historical Map Web Sites (Perry-Castaneda Map Library) Links to historical maps on servers around the world. Collections and Individual Atlases 1895 U.S. The Internet map The map of the Internet Like any other map, The Internet map is a scheme displaying objects’ relative position; but unlike real maps (e.g. the map of the Earth) or virtual maps (e.g. the map of Mordor), the objects shown on it are not aligned on a surface. Mathematically speaking, The Internet map is a bi-dimensional presentation of links between websites on the Internet. Every site is a circle on the map, and its size is determined by website traffic, the larger the amount of traffic, the bigger the circle. Users’ switching between websites forms links, and the stronger the link, the closer the websites tend to arrange themselves to each other. Charges and springs To draw an analogy from classical physics, one may say that websites are electrically charged bodies, while links between them are springs. Also, an analogy can be drawn from quantum physics. Anyway, the real algorithm of plotting The Internet map is quite far from the analogies given above. Semantic web The Internet Phenomenon

Carna Botnet Data collection[edit] It was compiled into a gif portrait to display Internet use around the world over the course of 24 hours. The data gathered included only the IPv4 address space and not the IPv6 address space.[3][4] The Carna Botnet creator believes that with a growing number of IPv6 hosts on the Internet, 2012 may have been the last time a census like this was possible.[5] Results[edit] Of the 4.3 billion possible IPv4 addresses, Carna Botnet found a total of 1.3 billion addresses in use, including 141 million that were behind a firewall and 729 million that returned reverse domain name system records. An earlier first Internet census by the USDHS LANDER-study had counted 187 million visible Internet hosts in 2006.[7][8] Number of hosts by top level domain[edit] Amongst other, Carna Botnet counted the number of hosts with reverse DNS names observed from May to October 2012. References[edit] External links[edit]

Google Expands Underwater Street View To New Locations Google today added a couple of new locations to its underwater Street View imagery collection, including a number spots around Monaco, Cancun and Isla Mujeres. Google unveiled underwater Street View back in 2012 and has been expanding it (very) slowly ever since. The company has partnered with the Catalin Seaview Survey on this project and uses a number of special underwater cameras to capture the panoramic images its uses for this project. By last summer, the collection featured six locations, including reefs around Australia’s Great Barrier Reef, the Philippines and Hawaii. During a presentation at its I/O developer conference last year, Google explained that the divers typically cover about 2 kilometers and take between 3,000 and 4,000 images per dive during their expeditions. Another new addition to Street View, by the way, is the shoreline of San Francisco as seen from the water.

Internet Mapping Project: Map gallery This map appeared in the December 1998 Wired. If you are interested in using this image in some way, contact the folks at Lumeta, who own the rights to the images and technology. These are variations on the IP address-based color schemes, basically just switching around R, G, and B. These have the technical names of color schemes 0, 1, and 2. Notes Both my wife and Lillian Schwartz, a noted artist, say this is better with a black background. World's Biggest Data Breaches & Hacks Let us know if we missed any big data breaches. » 70% of passwords are in this chart. Is yours? » Safely check if your details have been compromised in any recent data breaches: » See the data: bit.ly/bigdatabreaches This interactive ‘Balloon Race’ code is powered by our forthcoming VizSweet software – a set of high-end dataviz tools for generating interactive visualisations. You might also like:

What the Internet Actually Looks Like - Megan Garber GeoTel Communications via Fortune and Mashable Here is what the Internet looks like: not a series of GIFs or a video of surfing goats, but a spindly collection of fiberoptic cables. The Internet, as a physical thing, actually looks a lot like a series of tubes. We know this, of course, but it's nice to be reminded of the physical filaments that afford our digital connections. The image above, as seen from the North Pole, offers the global view of the Internet's major cables.