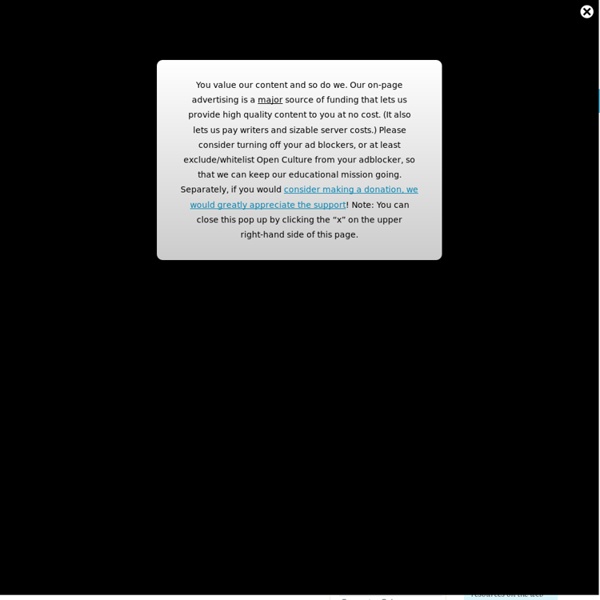 British Pathé was one of the leading producers of newsreels and documentaries during the 20th Century. This week, the company, now an archive, is turning over its entire collection — over 85,000 historical films – to YouTube. The archive — which spans from 1896 to 1976 – is a goldmine of footage, containing movies of some of the most important moments of the last 100 years. It’s a treasure trove for film buffs, culture nerds and history mavens everywhere. In Pathé’s playlist “A Day That Shook the World,” which traces an Anglo-centric history of the 20th Century, you will find clips of the Wright Brothers’ first flight, the bombing of Hiroshima and Neil Armstrong’s walk on the moon, alongside footage of Queen Victoria’s funeral and Roger Bannister’s 4-minute mile. There’s, of course, footage of the dramatic Hindenburg crash and Lindbergh’s daring cross-Atlantic flight. Here’s a film about a technological innovation that curiously didn’t take off — an amphibious scooter. Related Content:

28 Breathtaking Photos Of Lighthouses That Have Stood The Test Of Time By: Earthporm | Lighthouses have helped guide ships to safety for many years, they are engraved in our culture and a big part of mankind’s history. Lighthouses are included in some of the oldest literary works and historical tales, granting them a very mystical charm. There was a time when someone worked every lighthouse, but today most are controlled electrically. Many things have changed since the early days, including using a combination of certain substances to create the light at the top of the tower–today we just use electricity. Many of the lighthouses still in existence today are very old, and some even have spooky tales about long lost watch guards, residents, and sailers that haunt these ocean-ravaged towers.

30 Of The Most Powerful Photos Ever Taken. #16 Will Give You Shivers Up Your Spine. It is said that one image can communicate more things than a thousand of words. Here is a collection of powerful photos from the past that do just that – without saying anything, they can still speak directly to the soul. 1. 17 year old Jan Rose Kasmir offers a flower to soldiers during the Pentagon anti-war protest in 1967. Marc Riboud The Cave Of Three Bridges The 250m high Baatara Gorge Waterfall at Tannourine in Lebanon cascades through a limestone cave and three ‘bridges’ formed by millions of years of erosion and rockfalls. Mind your step. The edges are slippery.

26 Pictures Will Make You Reevaluate Your Entire Existence 26 Pictures Will Make You Reevaluate Your Entire Existence 1. This is the Earth! This is where you live. 8 Natural Weather Phenomena You Won't Believe Are Real The weather has been known to do all kinds of weird and wonderful things, some of which are incredibly hard to imagine without seeing them. Some weather phenomena are much rarer than others however and some of them are so strange it’s hard to believe they’re real. That said, here are eight such phenomena…

A definitive bucket list of the 25 things you need to do as an adventure traveler EVERY TRAVELER HAS THEIR OWN “bucket list,” whether they call it that or not. You can’t travel and not make mental notes about the next places you want to go, the next things you want to do. Obviously, the point is that it’s personal. 17 Reasons These People Deserve Gold Medal For Their Love For Animals 1. This Respect For Police Dog We read time to time heart melting stories of people helping animals. So here we come up with 17 of the best moments when people prove that they have heart of gold for helpless animals.

100 Free Tools to Learn a New Skill in Almost Anything While there is much to be learnt from taking a course or learning from a professional instructor, there are many online tools that can help you learn just about anything you’d like and for free. With a little dedication, these online tools can help guide you through the learning process step-by-step. Whether you want to learn how to cook healthy meals, renovate your kitchen, play a musical instrument, learn a new language, discover the intricacies of calculus plus so much more.

300+ Mind Expanding Documentaries I watch a lot of documentaries. I think they are incredible tools for learning and increasing our awareness of important issues. The power of an interesting documentary is that it can open our minds to new possibilities and deepen our understanding of the world. 50 Life Secrets and Tips Memorize something everyday.Not only will this leave your brain sharp and your memory functioning, you will also have a huge library of quotes to bust out at any moment. Poetry, sayings and philosophies are your best options.Constantly try to reduce your attachment to possessions.Those who are heavy-set with material desires will have a lot of trouble when their things are taken away from them or lost. Possessions do end up owning you, not the other way around.