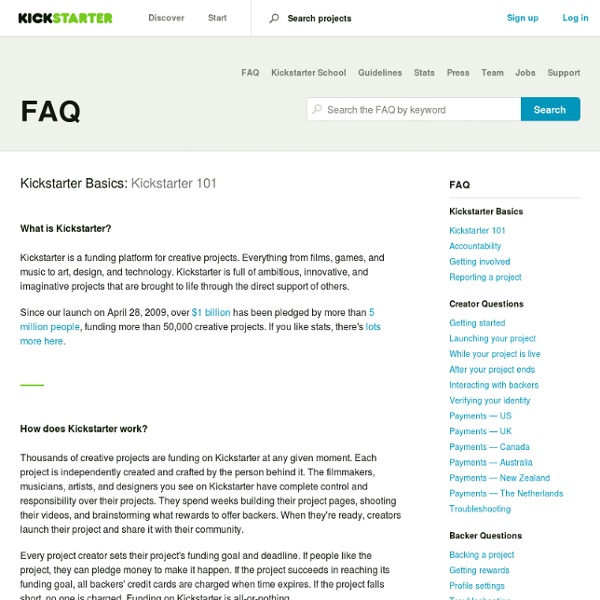 We allow creative projects in the worlds of Art, Comics, Dance, Design, Fashion, Film, Food, Games, Music, Photography, Publishing, Technology, and Theater. Everything on Kickstarter must be a project. A project has a clear goal, like making an album, a book, or a work of art. A project will eventually be completed, and something will be produced by it. Kickstarter does not allow charity, cause, or "fund my life" projects. Check out our project guidelines for details.

My collection of funny emails from my inbox. Subject: 5 MINUTE MANAGEMENT COURSE Lesson 1: A man is getting into the shower just as his wife is finishing up her shower, when the doorbell rings. The wife quickly wraps herself in a towel and runs downstairs. When she opens the door, there stands Bob, the next-door neighbor. Kanpai! Brewing Sake The bottles are slender and elegant and colored a frosty white or baby blue, alcohol levels usually hover in the mid-teens, and the price tags often exceed 30 or 40 bucks. For these reasons, sake has gained a reputation among many Westerners as the Eastern equivalent of fine wine — something rare and precious, to be consumed in tiny portions, and more often than not simply out of reach. But this favored table beverage of Japan is actually a simple grain-based brew, much like beer. And while it’s true that good sake, often called “rice wine,” is expensive, there’s an easy way around the price tag: make it at home.

Playground Interactive activities, some used other places on Serendip for other reasons, and others just because ...? The idea, of course, is that there isn't a whole lot of difference between playing and learning ... exploring is the underpinnings and enjoyment inherent in both. If that idea makes you think of either play or education in new ways, so much the better. Regardless, the web provides not only information and pictures, but also the wherewithal to have experiences that you might not otherwise have a chance to have. And creating such things to play with (and maybe even to learn from) is a large part of what Serendip is about, so browse the list. And have fun.

The Starter's Guide to Brewing Beer Serious about making large batches of beer? Splurge for a propane-powered rig with a three-tiered brew stand. This setup, by Indiana-based Blichmann Engineering, costs about $2000 and features a trio of 20- to 30-gallon pots and gas burners that put out 216,000 Btu per hour. (The high heat quickly boils large amounts of liquid, shaving hours off the brewing process.) More casual or budget brewers can make do with one big pot, heated on a common kitchen stove. Sanitize 10 Sages With 10 Inspiring Messages Throughout the ages there have been a few notable luminaries of humanity that have experienced a transformational harmonization initiated by the vectors of human becoming: love, beauty, and truth. We can look up to these sages for inspiration that cultivates courage, will, and determination to experience an inner transformation as well. Although there are quite a few individuals that we can look to for sage-like guidance, 10 will be focused on here, each with a message they streamed into the global mind in their own unique way. Let these words spark a shift within that will change the very way to see Reality. Thich Nhat Hanh When you plant lettuce, if it does not grow well, you don’t blame the lettuce.

R'ha - A Short Sci-Fi Film That Could Make Hollywood Jealous [VBideo] Steven On January 11, 2013 What if, instead of man versus robots it was an alien life form that was attacked by the robotic life that they had created? This is the premise behind an awesome short science fiction film called R’ha that was directed and animated by 22-year-old Kaleb Lechowski and I gotta tell you Kaleb could teach Hollywood a thing or two. R’ha is definitely one of those short films that should have the big budget boys drooling and bidding like crazy to get their hands on this film and the talented Kaleb. UPDATE: As we hoped for it seems that R’ha has been picked up by Hollywood.

Book Country: Discover New Fiction with the Genre Map Publishers, booksellers, and readers describe books by their literary categories, or genres. It's how books are placed in stores and sold online. We created the Genre Map to help you find the right genre for your book. Roll over the map with your cursor to see the different genres. Some categories, such as women's fiction, stand alone. 10 Best Sexual Drinking Games Some of the best sexual drinking games can be done either in an intimate setting with only you and your girlfriend or you can make it a party and have multiple people. The ten most commonly played sexual drinking games are: Nine cans of beer or the floor. In this game you will need about nine cans of beer per person, (NOTE: not everyone will finish this game) a shot glass and a time keeper. Every minute for 100 minutes you take a shot of beer.

10 Psychological Experiments That Went Horribly Wrong Psychology as we know it is a relatively young science, but since its inception it has helped us to gain a greater understanding of ourselves and our interactions with the world. Many psychological experiments have been valid and ethical, allowing researchers to make new treatments and therapies available, and giving other insights into our motivations and actions. Sadly, others have ended up backfiring horribly — ruining lives and shaming the profession. Here are ten psychological experiments that spiraled out of control.

Jessica’s Jokes – Weight Loss, Deserted Islands, Wigs & More Enjoy this week’s jokes! My neighbor across the street is young, hot and single. I couldn’t help but watch her as she got home from work this evening. I was surprised when she walked across the street, up my driveway, and knocked on my door.

Never Talk to the Police By Dave Hitt on Mar 31, 2010 in Featured, Police State What’s the best response when a cop asks you something? Silence, or a short, polite non-answer. 6 Steps to Meeting New People (For the Socially Intolerable) I'm not going to ask why you need to meet new people. Maybe you transferred to a different school, or you took a job in a new town, or all of your old friends changed their phone numbers and names. Whatever the case, you now find yourself alone, lonely, and wanting to do something about it. GettySomething constructive, I should clarify. As it happens, I've moved around a bit in my life, and I've also, if we're being honest here, had at least a few friends figure me out and stop taking my calls.

Neil deGrasse Tyson Lists 8 (Free) Books Every Intelligent Person Should Read A Reddit.com user posed the question to Neil deGrasse Tyson: "Which books should be read by every single intelligent person on the planet?" Below, you will find the book list offered up by the astrophysicist, director of the Hayden Planetarium, and popularizer of science. Where possible, we have included links to free versions of the books, all taken from our Free Audio Books and Free eBooks collections. Or you can always download a professionally-narrated book for free from Audible.com. Details here. If you're looking for a more extensive list of essential works, don't miss The Harvard Classics, a 51 volume series that you can now download online.