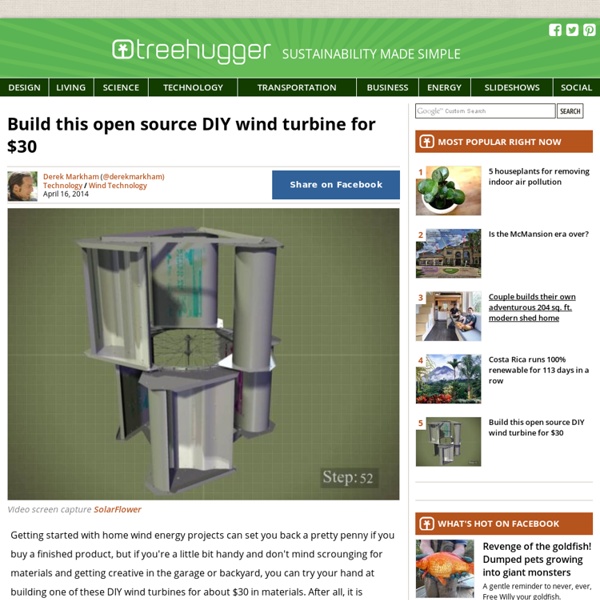 Getting started with home wind energy projects can set you back a pretty penny if you buy a finished product, but if you're a little bit handy and don't mind scrounging for materials and getting creative in the garage or backyard, you can try your hand at building one of these DIY wind turbines for about $30 in materials. After all, it is #iheartrenewables week! We've previously covered Daniel Connell's open source concentrated solar collector plans, but now he's back with another great DIY renewable energy project, a vertical axis wind turbine based on the Lenz2 lift+drag design. Connell's design calls for using aluminum lithographic offset printing plates to catch the wind, which he says can be obtained cheaply (or possibly even free) from an offset printing company, and a variety of hardware and a bicycle wheel. "The turbine uses the ~40% mechanically efficient Lenz2 lift+drag design. Here's a little clip of the vertical axis wind turbine being challenged by strong winds:

Lenz2 turbine A few details for building the 3ft diameter x 4ft tall Lenz2 turbine... Below is a drawing for the wing ribs cut from 3/4" plywood. NOTE: The above drawing shows that only 6 ribs are required, that should actually be 9 ribs required. Mag-Wind Vertical Axis Turbine for your Home UPDATE: It turns out that this product was a fraud, and the proponent of it has been indicted for securities and wire fraud. You can read more about this at Paul Gipe's website Wind Works. We get excited about new technologies; sometimes we jump the gun, so it is great to find a product that is new, different and actually available. It's a "Magnetically-Levitated Axial Flux Alternator with Programmable Variable Coil Resistance, Vertical Axis Wind Turbine' , and it has just come on the market. Designed by Thomas Priest-Brown and Jim Rowan in Canada and manufactured in Texas, it"solves 11 different problems that previously limited the development of vertical-axis wind turbines for generation of electricity ."

Clarian Power: SmartBox Plug-In Wind Power The SmartBox Wind Turbine is a 48-inch tall vertical-axis wind turbine (VAWT) that plugs directly into an existing electrical outlet and automatically generates power whenever the wind is blowing. The SmartBox Wind Turbine can be mounted directly to the side of a home, on a rooftop or wind tower, or even existing street lights. And, it can generate up to 40 kWh per month in moderate winds enough to light an average home using energy efficient light bulbs. Expected to cost under $800, the SmartBox Wind Turbine is a cost-effective option for homeowners and small business owners looking to harness wind power for the first time. Working in tandem with the existing power grid, Working in tandem with the existing power grid, the SmartBox Wind Turbine works to conserve energy by producing enough clean, renewable wind power to offset a portion of the power being consumed in your home.

30-Blade Eco Whisper Wind Turbine is "Virtually Silent" YouTube/Video screen capture Want wind power, but think that those tri-bladed behemoths are just too loud? Well then, Australia Renewable Energy Solutions has just the thing for you: The Eco Whisper wind turbine. This sharp-looking little contraption may only have a 20 kW generating capacity, but the company claims that the turbine is "virtually silent". It's solar solar! New process uses sun's energy for producing photovoltaic materials True energy independence requires that we can manufacture the systems that collect solar or other renewable energy while using only those same renewable sources of energy. Researchers at Oregon State University therefore celebrate their breakthrough in producing solar energy materials with the power of the sun. Even better, the process offers time saving and cost benefits over current processes. © Oregon State UniversityThe new process relies on a continuous production process. Solar power heats materials in a continuous flow micro-reactor to generate a photosensitive ink which can be used to print thin film solar panels. Compared to current manufacturing methods, which are mostly batch processed, the continuous flow approach saves time -- producing materials in minutes that might take half an hour to several hours by traditional methods.

Jeff McIntire-Strasburg has been blogging a greener world via sustainablog since 2003! Technology Published on April 14th, 2014 | by Jeff McIntire-Strasburg Renewable energy = high upfront costs… right? Yes, if you’re paying someone else to put your system together for you. Now, that seems like kind of a no-brainer for most of us: I certainly don’t feel like I know enough to build my own solar panel array or wind turbine. A $200 DIY Snowshovel Windmill Project This entire alternative energy project costs less than $200 to build. And, yes, those are snow shovels that you see in the photo. Once built, the windmill will need to be connected to some kind of appropriate alternator and then can generate 300 watts of power. This is the easiest homemade windmill you will find! CORRECTION! Innovative Wind Turbine From Australia An Australian invention could make cheap micro-generation via wind power far easier. Graeme Attey has designed a modular wind turbine small enough for the roof of house, and with fully enclosed blades. It seems that without large blades, more of these could fit onto a particular surface. The West Australian Government is funding some trials in the hope that he can get an efficient model working.

Generating Off-Grid Power: The Four Best Ways So, you've thought about whether or not living off the grid is right for you; you know that it means no more utility bills and generating all of your own power, but what's involved in that? It isn't as easy as slapping a few solar panels on the roof and calling it good; when it comes to generating off grid power, there are a handful of methods that can combine to generate all the energy you'll need to live comfortably off the grid.Plug in to off grid power with solar electricitySolar power is probably the one that jumps to mind for most of us when it comes to off-grid energy. The sun-powered option, which includes photovoltaic solar panels, an inverter and batteries, can provide lots of electric power (especially if you get a lot of solar exposure where you live) for a long time, without any moving parts and a little maintenance. When it comes to picking a turbine, size matters.

The Geometry of Gears - Theory Of Machines - Engineering Reference with Worked Examples The geometry of both Cycloid and Involute gears. An analysis of the motion between two teeth and the calculation of the path of contact. Introduction It is difficult to imagine machines which do not include some sort of toothed gear system. Portable, collapsible wind turbine weighs less than 4 pounds It used to be that every week there was a new type of portable solar charging device to help you charge your gadgets on the go, but lately we've seen quite a few portable wind turbines, even DIY ones. This new wide range of devices to help you stay off grid whether you're using them in your backyard or on a long-distance hike is great because the more options that are out there, the better the chance is that people will use them and have an easy way of bringing renewable energy into their lives. The latest personal wind turbine offering is called WindPax and its inventors have taken to Kickstarter to raise money for its production. This one is neat because it has features I haven't seen in similar devices, especially its adaptability to different scenarios. There are two different sizes -- the Wisp and the Breeze.