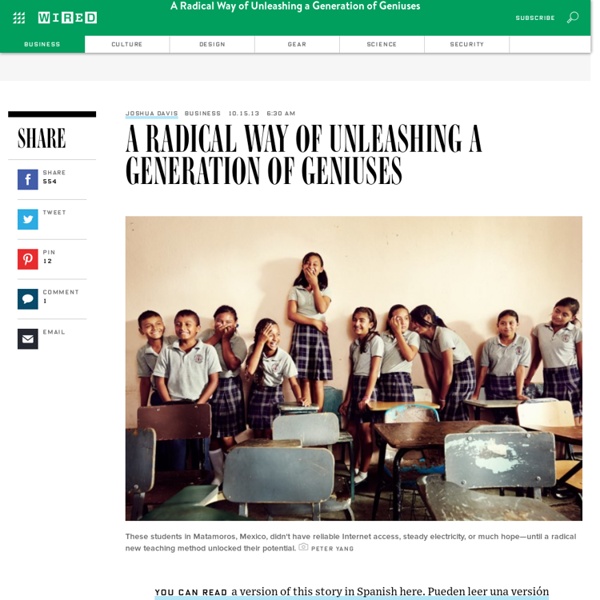 You can read a version of this story in Spanish here. Pueden leer una versión de esta historia en español aquí. José Urbina López Primary School sits next to a dump just across the US border in Mexico. For 12-year-old Paloma Noyola Bueno, it was a bright spot. After school, Paloma would come home and sit with her father in the main room of their cement-and-wood home. Sergio Juárez Correa was used to teaching that kind of class. He too had grown up beside a garbage dump in Matamoros, and he had become a teacher to help kids learn enough to make something more of their lives. Juárez Correa didn’t know it yet, but he had happened on an emerging educational philosophy, one that applies the logic of the digital age to the classroom. And yet the dominant model of public education is still fundamentally rooted in the industrial revolution that spawned it, when workplaces valued punctuality, regularity, attention, and silence above all else. He looked around the room. Go Back to Top. Related:  Educational Models

Fast Company's Guide To The Generation Flux College Degree The cost of college tuition has risen faster than nearly any other good or service in America for more than three decades. A bachelor’s degree at New York University, the most expensive university in the country, will now set you back $244,000. The average student loan borrower pays much less but still walks away almost $27,000 in debt for an undergraduate degree. Student loan debt has outpaced credit card debt in this country, and the percentage of people who default on their loans after just three years just rose to 13%. These eye-popping prices have inspired a raging debate over whether college is really worth the money anymore. Some prominent voices in the entrepreneurship world, such as PayPal cofounder Peter Thiel, say no. Economists and social scientists scoff, arguing the average return on an education remains robust; in today's economy, you need at least a technical degree or certificate to qualify for anything better than a fast food or warehouse job.

Bloom's Taxonomy of Learning Domains Bloom's Taxonomy was created in 1956 under the leadership of educational psychologist Dr Benjamin Bloom in order to promote higher forms of thinking in education, such as analyzing and evaluating concepts, processes, procedures, and principles, rather than just remembering facts (rote learning). It is most often used when designing educational, training, and learning processes. The Three Domains of Learning The committee identified three domains of educational activities or learning (Bloom, et al. 1956): Cognitive: mental skills (knowledge) Affective: growth in feelings or emotional areas (attitude or self) Psychomotor: manual or physical skills (skills) Since the work was produced by higher education, the words tend to be a little bigger than we normally use. While the committee produced an elaborate compilation for the cognitive and affective domains, they omitted the psychomotor domain. Cognitive Domain Knowledge Comprehension Application Analysis Synthesis Evaluation Next Steps Review

50 incredible stats about the tech scene that businesses need to know 21 October '13, 06:26am Follow The Internet can be a difficult space for entrepreneurs to maneuver considering the many facets to it. Should I start with a mobile presence first? Do I need an app or can I just optimize my website for mobile viewing? And here is where a slideshow compiled by Vala Afshar, the CMO and Chief Customer Officer at American computer networking company Enterasys, comes in extremely useful. Statistics to do with the Internet are aplenty (we publish stories touting various stats every once in a while) — but this presentation pulls all of them together for an easy overview. Want to find out how many apps will be downloaded this year, and if YouTube or cable networks reach more potential customers?

Noam Chomsky on Democracy and Education in the 21st Century and Beyond Combat the epidemic of misinformation that plagues the corporate media! Click here to make a tax-deductible donation to Truthout and keep independent journalism strong. Noam Chomsky. (Photo: Andrew Rusk / Flickr ) Noam Chomsky is an American linguist, philosopher, political critic and activist. Also see: Democracy and Education in the 21st Century: Part 1, Daniel Falcone Interviews Noam Chomsky, June 2009 Daniel Falcone for Truthout: I wanted to ask you some questions about education in the 21st century. Chomsky: Not sure the topic exists. Falcone: Yes, right. Chomsky: That's an interesting question. And these were independent farmers. And there was more to it than that. So, it's kind of a mixture. Right now, we happen to be in a general period of regression, not just in education. Finland's, which has the best educational system in the world, by the records at least, is free. The other is what's happening to teachers like you. And that's happening all over. Chomsky: Off-job control.

3dprintineducation « Dave White's blog about 3D Printing in Education Why Anti-Authoritarians are Diagnosed as Mentally Ill (Note: Read Bruce Levine’s latest post: Anti-Authoritarians and Schizophrenia: Do Rebels Who Defy Treatment Do Better? In my career as a psychologist, I have talked with hundreds of people previously diagnosed by other professionals with oppositional defiant disorder, attention deficit hyperactive disorder, anxiety disorder and other psychiatric illnesses, and I am struck by (1) how many of those diagnosed are essentially anti-authoritarians, and (2) how those professionals who have diagnosed them are not. Anti-authoritarians question whether an authority is a legitimate one before taking that authority seriously. Evaluating the legitimacy of authorities includes assessing whether or not authorities actually know what they are talking about, are honest, and care about those people who are respecting their authority. Some activists lament how few anti-authoritarians there appear to be in the United States. Why Mental Health Professionals Diagnose Anti-Authoritarians with Mental Illness

Exciting Developments in Uses of 3D Printing in Education The emergence of 3D printing has drawn the attention of different business sectors across the world. This high-tech printing method uses many additive layers compounded with each other to create the desired object. A primary driver behind its growing popularity is the ability to create certain constructs more proficiently and cost-effectively than making them by hand or using traditional manufacturing approaches. 3D printing is also making its way into educational institutions. Before delving into many ways 3D printing is being used in education, you might want to take a look at the video clip below. With the possibilities that 3D printing enables, and it’s still emerging status, it shouldn’t be surprising to learn that a growing number of universities have procured printers and are using them in a variety of research projects, and as instructional tools. Here are a few of the reasons 3D printing is attractive for academic applications: About K. Print This Post

P2PU How we test ideas about learning. Current projects Use the drop down list above to see all current projects. Here are a few examples: The Citizen Science project makes scientific ideas and practice accessible to everyone.The Open Masters creates a template for anyone to pursue their own semi-formal study.The Mechanical MOOC automates a massive course experience. What’s a project? Projects take many forms- such as organizing face to face meetings around an existing course, building a community of ambassadors, conducting research experiments, running experimental courses, or building technology and tools- but all projects: Create something new- a tool, content, experience, model, etc.Test a hypothesis or question, or demonstrate a new way of doing things.Openly share what they are creating and learning. Projects are not afraid to fail, but they don’t whimper. P2PU projects are an important part of what we do, and they are rooted in our values of openness, community, and peer learning.

New Zealand to incorperate 3D printing in education The New Zealand education curriculum is expanding. Next year students will have the opportunity to use the most talked about manufacturing techniques and machines in 2013. Yes, you guessed it, 3D printers will now be incorporated into K-12 education! The new curriculum standard 91622 will give students the chance to design a Chess piece that will need to be made on a 3D printer. Most 3D CAD for Schools is free and there are some fantastic 3D modelling programs to choose from. FormZ is free for students and school.Tinkercad is a fantastic entry level into the 3D CAD world using cloud based computing.Minecraft is another great way to design and print 3D models, just requires Mineways to save the design as an STL. Download the new standard here standard 91622 Our store related products:

Reading, Writing, and Self-Esteem — Emerging Ideas By almost every measure, Cupertino High School in northern California is a successful place. Perched in the heart of Silicon Valley, Cupertino sent 85 percent of its senior class to college in 2009, and hundreds of its students take advanced placement classes each year. But some of Cupertino’s kids are doing better than others. On average, students there excel on California’s Academic Performance Index. Nationwide, the numbers are even more striking: 94 percent of white young adults have earned a high school degree by age 24, compared to only 87 percent of blacks and 78 percent of Latinos. Recently, a group of social and cognitive psychologists have hypothesized that at least some academic disparities spring from toxic stereotypes that cause ethnic-minority and other students to question whether they belong in school and can do well there. “When this was first described to me, I was skeptical,” says physics professor Michael Dubson, who participated in one of the studies.

7 Educational Uses for 3D Printing - Getting Smart by Guest Author - EdTech, higher ed, Innovation By Nancy Parker When someone says that they have a 3D printer, many people visualize a printer that produces 3D images on a sheet of paper. In actuality, a 3D printer goes beyond an image on paper and brings the object to life in real 3D. 1. 2. 3. 4. 5. 6. 7. If it can be created in a supported 3D rendering program, it can exist in real life. Nancy Parker writes about wide range of subjects like health, Parenting, Child Care, Babysitting, nanny, www.enannysource.com/ etc. Photo Courtesy of Makerbot

Henry A. Giroux: Neoliberalism, Democracy and the University as a Public Sphere Henry A. Giroux. (Image: Jared Rodriguez / Truthout)This story wasn't funded by corporate advertising, but by readers like you. Can you help sustain our work with a tax-deductible donation? Public Intellectual Henry Giroux speaks with Truthout about his new book and its exploration of how neoliberalism makes it harder for poor children to attend college and forces debt-ridden students into an intellectual and moral dead zone devoid of imagination. Truthout contributor, director of Truthout's Public Intellectual Project and Truthout Board member Henry A. Henry A. Victoria Harper: Welcome, Henry. Henry A. Under neoliberalism, desire is wedded to commodities and the private addictions of the market. As a form of public pedagogy, neoliberalism casts all dimensions of life in terms of market rationality. What is new about neoliberalism, especially in the United States is that it has abandoned the social contract and any viable notion of long-term investments in social goods. Also see:

10 Ways 3D Printing Can Be Used In Education [Infographic] How 3D Printing Works 3D printing sounds like something from science fiction, but the process is similar to that of CNC machining, where billets are cut into specific shapes and products. But rather than cutting, it prints. A 3D printer works by “printing” objects–but instead of using ink, it uses more substantive materials–plastics, metal, rubber, and the like. The result is a product that while not as intricate, durable, or functional as the real-world equivalent, is otherwise a real thing that didn’t exist 30 seconds before you printed it. In fact, what it is you’re actually producing depends on what is being printed: if it’s toy jewelry, rubber balls, and plastic chess pieces your after, you’re printing not an analogue of the real thing, but the real thing itself. Crazy. 11 Ways 3D Printing Can Be Used In Education 1. 2. 3. 4. 5. 6. 7. 8. 9. 10. Infographic source onlinedegrees.org; How 3D Printing Works