Relax Like A Pro: 5 Steps to Hacking Your Sleep 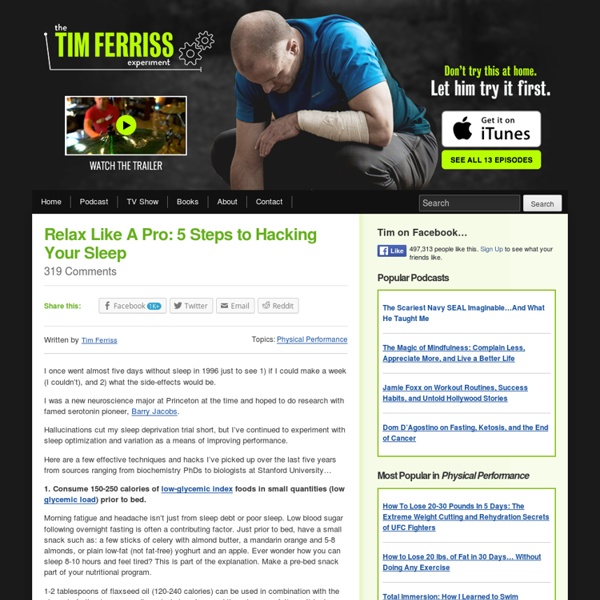 I once went almost five days without sleep in 1996 just to see 1) if I could make a week (I couldn’t), and 2) what the side-effects would be. I was a new neuroscience major at Princeton at the time and hoped to do research with famed serotonin pioneer, Barry Jacobs. Hallucinations cut my sleep deprivation trial short, but I’ve continued to experiment with sleep optimization and variation as a means of improving performance. Here are a few effective techniques and hacks I’ve picked up over the last five years from sources ranging from biochemistry PhDs to biologists at Stanford University… 1. Morning fatigue and headache isn’t just from sleep debt or poor sleep. 1-2 tablespoons of flaxseed oil (120-240 calories) can be used in combination with the above to further increase cell repair during sleep and thus decrease fatigue. 2. Japanese have longer lifespans that do most other ethnicities. The result: it’s like getting hit with an elephant tranquilizer. 3. 4. 5. Sweet dreams. Related:  Développement personnel • Sleep

A How-To Guide: Accelerated Learning for Accelerated Times The above video is a short presentation I gave at The Next Web Conference in Amsterdam. It covers a basic framework for mastering any skill quickly, including languages, music, dance, and more. What skill have you put off learning for longest… and why? Let me know in the comments. Perhaps I (or other readers) can help. Important afterword: NOTE — For my competition launched last week (not too late to join), roundtrip airfare is covered for all four winners. Related content:The 4-Hour Chef and Meta-Learning — 200+ pages on all I know about accelerated learningTotal Immersion: How I Learned to Swim Effortlessly in 10 Days and You Can TooScientific Speed Reading: How to Read 300% Faster in 20 MinutesHow I Deconstruct Languages (scroll through the list)

The Most Successful Techniques for Rising Early ‘The proper response to life is applause.’ ~William Carlos Williams By Leo Babauta Waking early is one of my favorite things in the world. Waking early can give you an hour or three of extra time for focus and creativity. I haven’t written about waking early for awhile, mostly because my waking time is in constant flux. I’ve learned a thing or two about how to change your wake-up time with joy, and today I’ll share the most successful techniques in my many experimentations. The Gradual Method The best method for changing the time you wake up is to do it gradually — 10-15 minutes earlier for 2-4 days, until you feel used to it, and then repeat. That might seem too slow to most people, and you’re free to disregard this advice. Sudden changes of an hour earlier or more in your waking time are difficult, and not likely to last. Sleeping patterns are difficult to change, and so the gradual method works much better. 3 Steps to Actually Get Up Here’s how to beat that in 3 steps: Get excited.

Why Can’t You Draw The Face of a Penny? Understand the Reason and Learn Spanish Twice as Fast Allow me to explain using a related problem. Vocabulary lists in a run-of-the-mill Spanish textbook usually look something like the below, taken from real-world sources I won’t shame by naming: La mano – the handEl arbol – the treeLas muñecas – the wrists¡Nos vemos mañana! – See you tomorrow! Pretty typical, right? Sadly, this format is also priming students for failure. Spanish is listed first, so we’re training recognition. Incredibly, almost no textbooks get this ordering right. Think I’m exaggerating? A fixed list equals inflexible recall. We want RAM—random-access memory—where we can pull any word from memory quickly. Mixing up flash cards accomplishes this, as does a software program like Anki or Duolingo (I advise), which does it automatically. If you have a textbook with a fixed list, just practice doing them backwards and also in evens, odds, every-third item, etc. ¡Mucha suerte, ché!

The Miracle and Mystery of Sleep: 12 Remarkable Psychological Studies “Sleeping is no mean art: for its sake one must stay awake all day.” ~Friedrich Nietzsche What beautiful rewards sleep delivers– if you can get enough of it. Sleep has profound effects on our memories, desires, self-control, learning, relationships and more. Here are twelve studies which demonstrate some of the psychological benefits of sleep and a few of the dangers of not getting enough. 1. Sleep is slippery beast, not least in how it’s susceptible to our perceptions of its quality. If we think we’ve had a wonderful sleep last night, we feel and perform better, even if our sleep was actually the same as usual. This is what Draganich and Erdal (2014) found in a study which had participants hooked up to sensors which they were told were measuring the quality of their sleep. Actually the sensors weren’t measuring anything. When they were given a cognitive test the next day, those who’d been told they slept the best also did the best in the test. The researchers dubbed this ‘placebo sleep’. 2.

What Steve Jobs, Thomas Edison, and Bob Dylan Have In Common Dr. Peter H. Diamandis is the Chairman and CEO of the X PRIZE Foundation, and co-Founder and Chairman of the Singularity University, a Silicon Valley-based institution partnered with NASA, Google, Autodesk and Nokia. Dr. Diamandis attended MIT, where he received his degrees in molecular genetics and aerospace engineering, as well as Harvard Medical School where he received his M.D. He’s no underachiever. I’ve known Peter for many years, both as a friend and as advising faculty at Singularity University. Here is a short essay from Peter on exactly this. Enter Peter In 1997 Apple introduced its “Think Different” advertising campaign with the now famous declaration: “Here’s to the crazy ones”: If you were to just hear these words, they’d seem like bravado — marketingspeak from a company not known for marketingspeak. The point, however obvious, is pretty fundamental: you need to be a little crazy to change the world, and you can’t really fake it. Henry Ford agreed:

Get Better Sleep: 5 Powerful New Tips From Research Ever have trouble getting to sleep? Or staying asleep? Or you get plenty of shut-eye but you’re not refreshed? And feeling tired the next day isn’t the half of it. Via Brain Rules: 12 Principles for Surviving and Thriving at Work, Home, and School: Take an A student used to scoring in the top 10 percent of virtually anything she does. And losing “beauty sleep” really does make you less attractive. Want to be miserable? Via NurtureShock: The result is that sleep-deprived people fail to recall pleasant memories, yet recall gloomy memories just fine. And if that’s not enough, lack of sleep could contribute to an early death. Via Night School: The results, published in 2007, revealed that participants who obtained two hours less sleep a night than they required nearly doubled their risk of death. We need answers before sundown. On his YouTube channel he has a number of great videos including this one on sleep tips. If you’re not too tired to keep reading, let’s get to it… No booze. Sum Up Tags:

Can You Rewire Your Brain In Two Weeks? One Man’s Attempt… Can you rewire your brain in two weeks? The answer appears to be — at least partially — yes. The following is a guest post by Shane Snow, frequent contributor to Wired and Fast Company and author of the new book SMARTCUTS: How Hackers, Innovators, and Icons Accelerate Success. Last year, he wrote about his two-week Soylent experiment, which went viral and racked up 500+ comments. He knows how to stir up controversy. In this post, Shane tests the “brain-sensing headband” called Muse. It’s received a lot of PR love, but does it stand up to the hype? As many of your know, I’m a long-time experimenter with “smart drugs,” which I think are both more valuable and more dangerous that most people realize. In the meantime, I hope you enjoy Shane’s experimentation! Enter Shane Snow The electrodes needed to be adjusted to fit my sweaty head, which was apparently the largest size the product could accommodate. My stress levels were high. Calm is a simple meditation exercise: Count your breaths.

The Incredible Importance of Sleep for Habits & Motivation By Leo Babauta For a long time, I underestimated the importance of sleep. Sure, I know that sleep is important for health and happiness and all of that … but it wasn’t until I learned two things that sleep took on a new importance for me: If you don’t get enough sleep, you will fail at changing habits; andIf you have a lack of sleep, your motivation will drop tremendously. For years I focused on waking early so that I’d be more productive and be able to focus on my morning habits. I could cite a bunch of studies and numbers, but here’s the honest truth: based on my own self-experiments, and working with thousands of people on habits, sleep is one of the most important but least valued factors when it comes to creating habits. And in my own life, I’ve noticed that when sleep levels drop, my productivity drops. Here’s what happens: This pattern continues until I get enough sleep. How to Get Better Sleep I’m not an expert on sleep, but here’s what I find to work for me: Go to bed earlier.