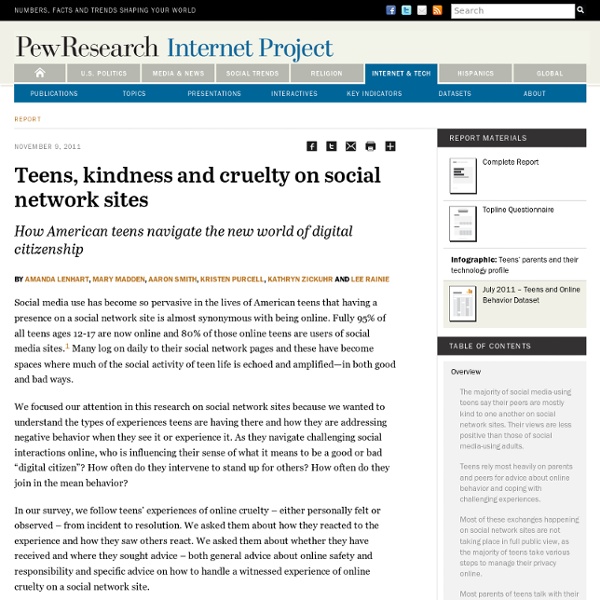 Social media use has become so pervasive in the lives of American teens that having a presence on a social network site is almost synonymous with being online. Fully 95% of all teens ages 12-17 are now online and 80% of those online teens are users of social media sites. Many log on daily to their social network pages and these have become spaces where much of the social activity of teen life is echoed and amplified—in both good and bad ways. We focused our attention in this research on social network sites because we wanted to understand the types of experiences teens are having there and how they are addressing negative behavior when they see it or experience it. As they navigate challenging social interactions online, who is influencing their sense of what it means to be a good or bad “digital citizen”? How often do they intervene to stand up for others? In our survey, we follow teens’ experiences of online cruelty – either personally felt or observed – from incident to resolution.

Why Americans use social media Why Americans Use Social Media Two-thirds of online adults (66%) use social media platforms such as Facebook, Twitter, MySpace or LinkedIn. These internet users say that connections with family members and friends (both new and old) are a primary consideration in their adoption of social media tools. Other factors play a much smaller role—14% of users say that connecting around a shared hobby or interest is a major reason they use social media, and 9% say that making new friends is equally important. Staying in touch with family members is a major factor across a range of social media users, but it’s especially important to women Those who say that keeping up with family members is a major consideration in their use of social networking sites are a demographically diverse group. Staying in touch with current friends and reconnecting with old friends is most relevant for those under the age of 50 Finding potential dating partners is at most a minor element of the social media experience

Why most Facebook users get more than they give About this study Half the adults and three-quarters of the teenagers in America use social networking sites (SNS) and Facebook by far is the most popular of these sites. The Pew Research Center’s Internet & American Life Project fielded a nationally representative phone survey about the social and civic lives of SNS users and reported the findings in June 2011 in a report entitled “Social networking sites and our lives.” During the phone survey, 269 of 877 original respondents who were Facebook users gave us permission to access data on their use of Facebook so that it could be matched with their survey responses. The results of that special analysis of 269 Facebook users identified in and recruited from a random, representative telephone survey are reported here. Power Users The average Facebook user gets more from their friends on Facebook than they give to their friends. Women make more status updates than men

Social networking sites and our lives Social networking sites and our lives Questions have been raised about the social impact of widespread use of social networking sites (SNS) like Facebook, LinkedIn, MySpace, and Twitter. Do these technologies isolate people and truncate their relationships? Or are there benefits associated with being connected to others in this way? The Pew Research Center’s Internet & American Life Project decided to examine SNS in a survey that explored people’s overall social networks and how use of these technologies is related to trust, tolerance, social support, and community and political engagement. The findings presented here paint a rich and complex picture of the role that digital technology plays in people’s social worlds. The number of those using social networking sites has nearly doubled since 2008 and the population of SNS users has gotten older. Facebook dominates the SNS space in this survey: 92% of SNS users are on Facebook; 29% use MySpace, 18% used LinkedIn and 13% use Twitter.

The Mobile Difference Overview Cast a glance at any coffee shop, train station, or airport boarding gate, and it is easy to see that mobile access to the internet is taking root in our society. Open laptops or furrowed brows staring at palm-sized screens are evidence of how routinely information is exchanged on wireless networks. But the incidence of such activity is only one dimension of this phenomenon. Not everyone has the wherewithal to engage with “always present” connectivity and, while some may love it, others may only dip their toes in the wireless water and not go deeper. Until now, it has not been clear how mobile access interacts with traditional wireline online behavior. The role of mobile internet access in evolving digital lifestyles is the cornerstone of the second typology of information and communication technology (ICT) users developed by the Pew Research Center’s Internet & American Life Project. The second typology is based on a December 2007 survey of 3,553 American adults. Overall:

Health Topics WASHINGTON – Health information is one of the most important subjects that internet users research online and new topics are continually added to the line-up, such as when food safety or drug recalls are in the news. In a national telephone survey conducted August 9-September 13, 2010, the Pew Internet Project and California HealthCare Foundation find that 80% of internet users look online for health information, making it the third most popular online pursuit among all those tracked by the Pew Internet Project, following email and using a search engine. However, the survey finds that not only are some demographic groups more likely than others to have internet access, but these same groups are generally more likely to seek health information once online. The most likely groups to look online for health information include: caregivers, women, whites, younger adults, and adults with at least some college education. The survey measured internet users’ interest in the following topics:

Is technology ruining our kids? Young people are using new technologies at ever-increasing rates, with 93 percent of young people now online, 73 percent on MySpace or Facebook, and 75 percent owning cell phones, up from 63 percent who owned cellphones in 2006, according to data from the Pew Internet American Life Project. With this increased access comes greater worry for parents, teachers and counselors, whose anxiety is fueled by media reports of young people engaging in "sexting"— sending provocative photos of themselves to others via cell phone—and concerns that new technologies might create more avenues for bullying and harassment. But are these fears realistic? No, said APA 2011 Annual Convention invited speaker Michele Ybarra, PhD, a public health and child mental health researcher who is president and research director of the nonprofit research organization Internet Solutions for Kids. "We need to better identify youth who are struggling and likely need individual help," said Ybarra. Bullies online

R U friends 4 real? As the parents of most teenagers know, today's two-hour telephone calls with friends are often now conducted via marathon text messaging or Facebook sessions. And that cultural shift has psychologists asking lots of questions: What happens to adolescent friendships when so much interpersonal communication is via text? Or when fights between best friends explode via Facebook for all to see? And can "OMG—ROTFL" ("Oh my God! I'm rolling on the floor laughing!") via text really convey the same amusement as hearing the giggles of a best friend? So far, the answers to those questions are mixed. "The [qualities] teens value in friendships, like loyalty and trust, remain the same," Azmitia says. Other psychologists, however, say today's ways of communicating can change the message, and wonder what effect that has on adolescent friendships, and even teens' social development. Outcasts reaching out The Internet's capacity for social connection doesn't only benefit shy and lonely teens.

Facebook: Friend or foe? Children whose parents don't ask them about their online activities and don't monitor their use of Facebook are less healthy, more narcissistic, and perform worse at school than children whose parents restrict their technology use, Larry D. Rosen, PhD, professor of psychology at California State University, Dominguez Hills, said at APA's 2011 Annual Convention. In his research on how Facebook and other technologies affect the health and well-being of today's youth, Rosen has found that students who use Facebook more throughout the day are more prone to mental health problems, have worse grades and tend to be sick more often than peers who use social media less frequently. "Young kids look at technology the way I look at air," said Rosen. "It's not just a tool to them, they sleep with it, they wake up with it, and it's part of their world." "Whether they checked Facebook just one time during a 15-minute observation period even predicted worse grades," said Rosen.

Don’t over-complicate social media and social ROI, advises Dr Martens consumer marketing manager There is too much confusion when it comes to establishing the right ROI for social media. At least that’s the opinion of Dr Martens’ consumer marketing manager Simon Wilkinson. “The hot potato of social media is ROI. In fact Dr Martens has found that its Facebook fans are four times more likely to buy than those who aren’t, according to Wilkinson. Speaking at the Drum’s Digital Convergence event in London this week Wilkinson took delegates through the journey the shoe retailer has taken, shifting from the four Ps – product, place, promotion and price, to the 4 Cs – conversation, customisation, community and co-creation. Dr Martens realised the necessity of integrating social media into its strategy when it first picked up on the fact that tens of thousands of conversations were being had independently across media not owned by the brand, according to Wilkinson.