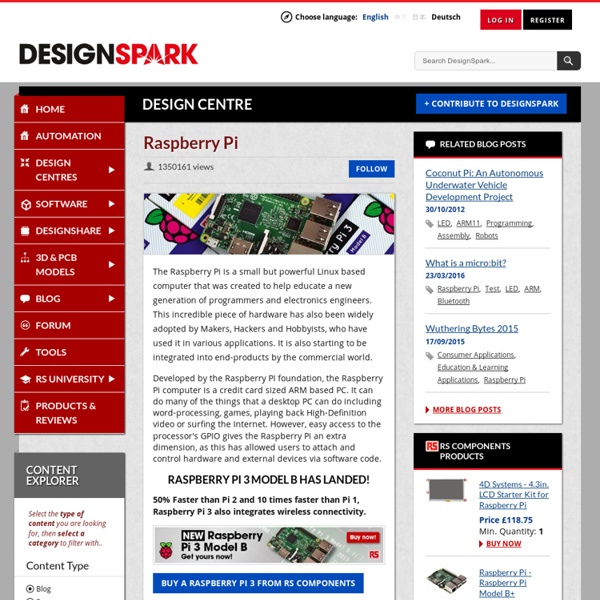 The Raspberry Pi is a small but powerful Linux based computer that was created to help educate a new generation of programmers and electronics engineers. This incredible piece of hardware has also been widely adopted by Makers, Hackers and Hobbyists, who have used it in various applications. It is also starting to be integrated into end-products by the commercial world. Developed by the Raspberry PI foundation, the Raspberry Pi computer is a credit card sized ARM based PC. It can do many of the things that a desktop PC can do including word-processing, games, playing back High-Definition video or surfing the Internet. However, easy access to the processor's GPIO gives the Raspberry Pi an extra dimension, as this has allowed users to attach and control hardware and external devices via software code. 50% Faster than Pi 2 and 10 times faster than Pi 1, Raspberry Pi 3 also integrates wireless connectivity. In this video we compare the new Raspberry Pi 3 Model B with the Raspberry Pi 2.

DIY Raspberry Pi Web Server Tutorial - Pi My Life Up A Raspberry Pi web server makes for a great lightweight Web Server. It can handle a small amount of traffic and lightweight scripts making it fantastic for a home server or an area you can learn web programing languages such as PHP. It can even handle WordPress so if you want to launch your own blog/website with a proper back-end you can easily do it. If you want to see it done visually then check out my video I have prepared for you below. If you like it then please subscribe so you stay up to date with all the latest Pi videos. Equipment Raspberry Pi Model B 512MB ARM11 Linux Mini PC 3 5inch LCD Various Modules d h m s day Python Web Server for your Raspberry Pi - All Raspbian is a distribution of Debian, a Linux operating system. Raspbian is the most common OS for your Raspberry Pi. 1) To download Raspbian, go to and download Raspbian via either torrent or direct download. 2) Extract the zip file (Right click & click extract for windows; Right click and click Open with > Archive Utility for mac). 3) Plug in your SD card for your Raspberry Pi into your computer. 4) Copy the Raspbian files to your SD card.

7 Steps To Install And Optimize Minecraft For Linux Minecraft is arguably one of the most popular, truly-cross-platform games out there, so it’s common for Linux users to own a copy of the game. While it usually runs well on most systems, it does still suffer from performance issues from time to time. Since Java, the language that Minecraft is written in, offers cross-platform capability at the cost of good performance, you may not achieve a perfectly lag-free experience (unless you have powerful hardware to support it). However, there are some steps that you can take that can make every little bit of difference. Grab The Latest JRE Since Minecraft is written in Java, it’s important that you run the latest version of the Java Runtime Environment (JRE).

Waveshare DVK512 Kits For Raspberry Pi Model B+ Include RTC, Sensors, LCD Display, and More Beaglebone (Black) expansion boards are called capes, Minnowboard ones are lures, and Raspberry Pi model B+ add-on boards can be HATs (HArdware on Top). When I found a kit for the Raspberry Pi model B+ on DealExtreme, based on Waveshare DVK512 add-ons board I thought it might have found a Chinese HAT, but unfortunately it is not compliant with HAT board specifications as it misses an EEPROM,and the dimensions are not the correct one either. Nevertheless, the kit, as well as extra accessories such as a 3.2″ LCD display, can still be interesting. DVK512 Board with LCD1602 Display The kit on DX comes with the following items: But other add-on board such as a 3.2″ resistive touch screen, a camera module, motion sensor module, ADC and DAC module, 3D accelerometer and modules, etc.. are also available.

Building A Raspberry Pi VPN Part One: How And Why To Build A Server Free, unencrypted wireless is everywhere, but you shouldn’t be checking your bank account on it unless you don’t mind somebody else snooping. The solution? A virtual private network, or VPN. A VPN extends your own private network into public places, so even if you’re using Starbucks’ Wi-Fi connection, your Internet browsing stays encrypted and secure. There are plenty of ways to set up a VPN, both with free and paid services, but each solution has its own pros and cons, determined by the way the VPN provider operates and charges and the kinds of VPN options it provides. Raspberry Pi B+ Expansion Board DVK512 is an expansion board designed for Raspberry Pi Model B+, integrates various components and interfaces for connecting external accessory boards. It's ideal for Raspberry Pi Model B+ evaluation and development. DVK512 RPi expansion board DVK512 RPi expansion board back view Connecting with LCD1602 Connecting with RPi A+

Raspberry Pi: Your Very Own Development Server The Raspberry Pi is a little computer that you can get for as low as US $35 and on which you can run many different types of software and build many different projects. In this article, I’m going to guide you through the process of setting it up as a home development server and deploying a full-stack JavaScript application that you can access from outside your network. This is great for setting up your own remote digital workspace, or simply to have control over the hardware you use for development. What Do You Need? In February 2015, the second generation Raspberry Pi was released with more memory and CPU power. This tutorial will also work fine on the first generation model (in fact, this is what I am using), but if you don’t have one yet, you will be better off buying the latest Raspberry Pi 2 Model B from one of the distributors.

Download & Install WiringPi is now maintained under GIT for ease of change tracking, however there is a Plan B if you’re unable to use GIT for whatever reasons (usually your firewall will be blocking you, so do check that first!) If you do not have GIT installed, then under any of the Debian releases (e.g. Raspbian), you can install it with: sudo apt-get install git-core If you get any errors here, make sure your Pi is up to date with the latest versions of Raspbian: sudo apt-get update sudo apt-get upgrade 5 Pointers To Supercharge Your Raspberry Pi Projects You’re in command of the command line. You’re not a noob at setting up NOOBS. Slowly but surely, you’re learning your way around the affordable, credit card-size computer for DIY tinkering, Raspberry Pi. See also: The Quantified Fish: How My Aquarium Uses Raspberry Pi However, there’s a steep jump-off point between the basics and the intermediate stuff. When you move from “setting up your Pi” tutorials to stuff like “building a media server,” the pre-project requirements start to get a little dicey.

bcm2835: C library for Broadcom BCM 2835 as used in Raspberry Pi This is a C library for Raspberry Pi (RPi). It provides access to GPIO and other IO functions on the Broadcom BCM 2835 chip, allowing access to the GPIO pins on the 26 pin IDE plug on the RPi board so you can control and interface with various external devices. It provides functions for reading digital inputs and setting digital outputs, using SPI and I2C, and for accessing the system timers. Pin event detection is supported by polling (interrupts are not supported). It is C++ compatible, and installs as a header file and non-shared library on any Linux-based distro (but clearly is no use except on Raspberry Pi or another board with BCM 2835). The version of the package that this documentation refers to can be downloaded from You can find the latest version at

42 of the Most Useful Raspberry Pi Commands Sometimes it’s difficult to keep track of all the useful Raspberry Pi commands you use, so I created a list of some of the most common and important ones that will make using Linux on the Raspberry Pi a lot easier. There are two user “modes” you can work with in Linux. One is a user mode with basic access privileges, and the other is a mode with administrator access privileges (AKA super user, or root). Some tasks cannot be performed with basic privileges and you will need to enter into root mode to perform them. You will frequently see the prefix sudo before commands, which means that you are telling the computer to operate the command with super user privileges.