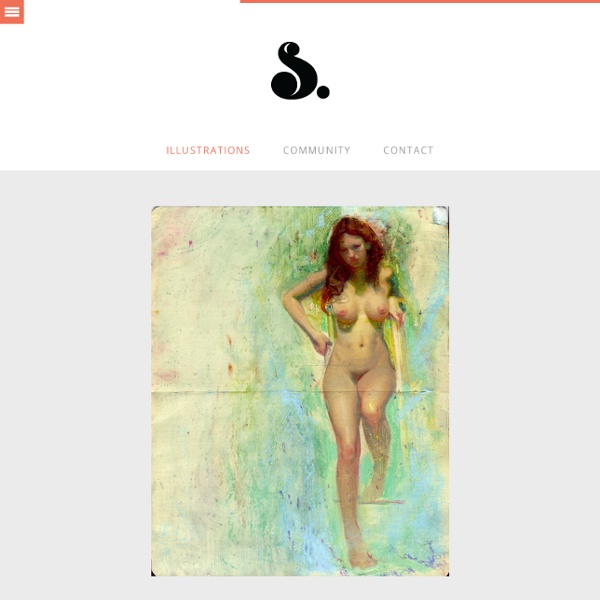 It’s been some time since a post here in Signature Illustration, as currently things are afoot in blog land. We’re hoping to make everything more user friendly and more community based. Don’t worry, we have heard all the requests and messages to have a peek at your artworks, and are trying to get everything together so that Signature can showcase more reader work, but since this is what we do for fun, it doesn’t always get as much attention as it should when work and life gets in the way. Sorry about that! Don’t mind us, keep submitting, and have a look through the archives, you can always find new inspiring imagery, even if the work is old. In the mean time, I hope to make some new posts over the new years vacation, and hopefully introduce you some new names. So to whet your appetite here is some gorgeous glowing work by Rodrigo Luff.

Sugar Rush Colour Illustrations of Natsuki Otani Natsuki Otani, is a Tokyo-born illustrator currently working in England. We like the boldness in her colour choices, which create a rush of bright cheeriness on viewing them, and yet there is a more serious, thoughtful element to her work as well. Natsuki’s hope is that her illustrations can make people happy, even if for just a moment. I have a style that is best described in colour and realised in detailed design. Bold vibrant colour forms the basis of a working practice that seeks to unite dreams and reality. I try to give the viewer a feast of colour and complexity, my surreal macabre touches are the counterpoint to my sweet and childlike innocent subjects.

Sci-fi illustrations by Shigeru Komatsuzaki Here is a collection of sci-fi illustrations by the prolific Shigeru Komatsuzaki (1915-2001), whose fantastic work appeared on plastic model kit boxes and in magazines and picture books in the 1960s to 1970s. Click the "+" under each image for a larger view. The Missiler, 1970 [+] 20 Amazing Typographic Works by Andre Beato André Beato is a Portuguese Graphic designer & Illustrator, born in Lisbon and currently based in London. His work is mostly vector based graphics, corporate identities and illustrated typography. He has been working in the various creative fields of graphic, print and editorial, collaborating with clients from various industries such as record labels, magazines, clothing companies, advertising and others. He has done some of the most amazing typographic works as follow.

Marta Altes / Fun ways with pencil shavings Fun pencil shaving art by Marta Altes – love that expression by that flamenco dancer! Marta studied graphic design in Barcelona but moved to London to pursue her interest in illustration; and now she has a few children’s books under her belt! Via Gabriela Illustration The late Dr. Jack Kevorkian, known for his life’s work of advocating assisted suicide and for helping to end over 130 lives with his ominous-sounding Thanatron, or “machine of death,” was also an oil painter. The doctor, who spend 8 years in prison, created a little-known body of work tinged with the horror of pain; illustrating his controversial ideas on compassion, the paintings take aim at his religious critics and appeal to a nuanced moral ideal where death is seen simultaneously as a terror and an escape. Kevorkian’s Thanatron takes its name from the ancient Greek personification of death; in his paintings, he also uses mythological themes. In “Fever,” he illustrates a hell composed of the ill and suffering; like Dante’s Virgil, he leads his painted patient through the depths of agony and fear with wide, sweeping brushstrokes. The Christian Brotherhood is reimagined as a monster characterized by multiple grotesque, sharp-toothed heads vaguely reminiscent of Inferno’s Satan.