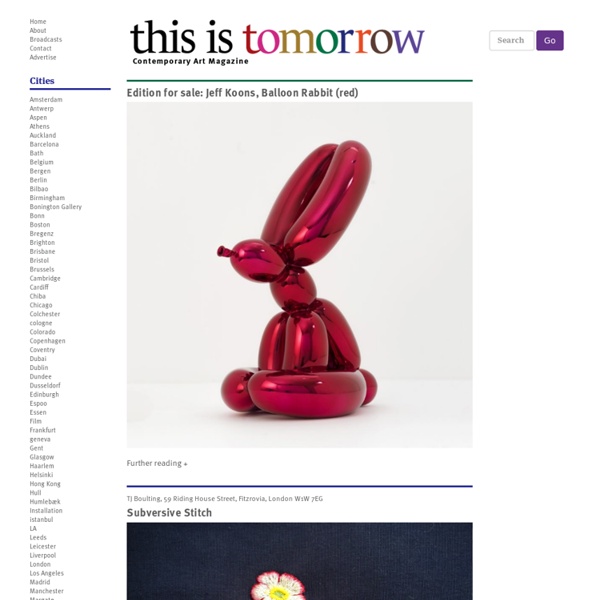 jillsies April 26, 2014 Shu Hung and Joseph Magliaro of Table of Contents on FVF Permalink Profile - 032c Workshop Finding the new in the old and the old in the new, it is considered the “Berlin magazine that propagates an aesthetic of brutal elegance” by the Frankfurter Allgemeine Zeitung, or simply as the “revue ultra-pointue” by Vogue Paris. The magazine fuses art and architecture, literature, urban studies and fashion in ways that can make one forget how depressing a visit to the newsstand has become.” The New York Times→ more Press Coverage Founded in 2000 in Berlin, 032c is edited by Joerg Koch and art directed by Mike Meiré. It is distributed to 29 countries and can be found in select art bookstores, fashion boutiques, and newsstands worldwide (also in our Store). 032c Workshop / Joerg Koch is an exhibition space in Berlin-Kreuzberg.

Branding Design for ‘sTREEt Campaign’ - Logo Designer Due to commercialisation and public negligence, the trees in Gangnam city (South Korea) are struggling to survive and are slowly disappearing. The brand “sTREEt” was created to draw attention to the disappearance of the trees in the streets. The rectangular shaped logo was designed with a frame in mind, inducing the audience to actually look at the street trees. Posters were placed at the entrance of a shopping street to get people’s attention. The interactive brochure and the window canvas were placed along the shopping street, both with rectangular holes that act as viewfinders. The website, also designed with the rectangular shape in mind, was set up to collect signatures for a petition to protect the street trees.

frankie magazine frankie 75 is on sale in Australia today, and if you’re thinking of popping to the shops to pick up a copy, you should probably bring a trolley or crane or at least some very limber muscles, because this issue is BIG. It’s also rather heavy, because it’s chock full of lovely extras, like a DIY mobile designed by local lady Min Pin, a booklet of nostalgic tuckshop recipes (mmm, finger buns), and our whopping annual wall planner. Ooh, boy! Blog April 15th, 2014 I recently said no to a contest featuring my books in a popular teen mag. The prize was some postcards of mine that were completed by celebrities. I turned it down because I feel that our society has an unhealthy obsession with celebrity culture, and a need to glorify superficial qualities in people (mainly appearance) and make them into role models.

MOUSSE CONTEMPORARY ART MAGAZINE Recently, the Miami-based artist Jillian Mayer shared with me selfeed.com, a project that she, Erik Carter, and Tyler Madsen premiered in January 2014 at the Utah Museum of Fine Arts. The site is a real-time stream of images tagged #selfie on Instagram, a continuous cycle of faces from around the planet, at all hours, in all poses, in any number of social configurations: lonely teens in bathrooms, group shots in hallway mirrors, couples at dinner, bros at the game. The stream moves too quickly for any one selfie to stand out. Instead, faces race across the screen, blurring into one another, smiles, eyes, facial hair, until a single, delirious visual object seems to emerge—one that John Kelsey recently described as “our finest and final hallucination, the ultimate transitional object” in the “bright ruins of a constantly refreshed now.” [1] The selfie has migrated across platforms and is now the most common, if not essential, unit of all social media. DIS, Courtesy: DIS Magazine

About Parasol Press, LTD | Original Art | Famous Artwork| Parasol Press, LTD To Portland, Oregon and to a new web site. Drop in either place any time. We don’t always have what is shown on the site, but we always try to have some work that is representative of the artist. We welcome your questions, comments and random thoughts and can often provide you with answers you won’t find on Google. Moving Target Visual art and poetry have long been cross-fertilizing forces in the Bay Area. Much of this history is well known and well-documented. Think of the wild sociality of Beat painters and poets in North Beach or the multidisciplinary scene that gathered around 80 Langton Street in the late 1970’s, to name just two moments in time. Other instances, although no less transformative in their own right, have been less documented. Here, local artist and curator Margaret Tedesco’s venue-hopping series, Moving Target, which brought performance, sound, and visual artists together with local writers, comes to mind. But perhaps because its most famous examples are now well accounted for, or because it has long been somewhat routine, such cross-pollination is often taken for granted.