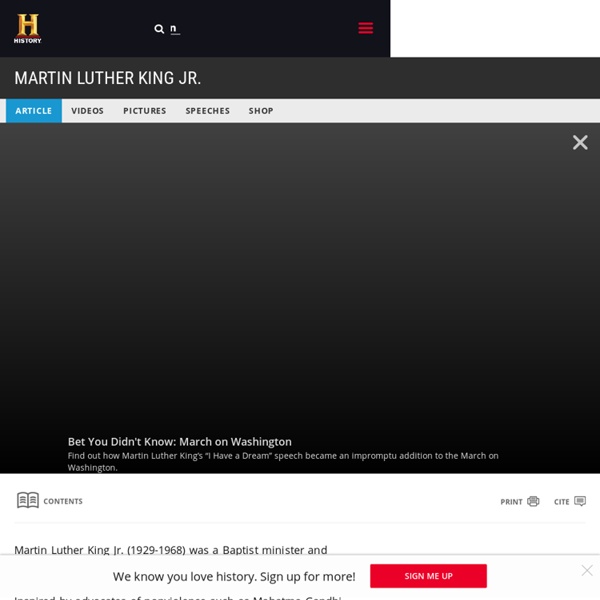 The second child of Martin Luther King Sr. (1899-1984), a pastor, and Alberta Williams King (1904-1974), a former schoolteacher, Martin Luther King Jr. was born in Atlanta, Georgia, on January 15, 1929. Along with his older sister, the future Christine King Farris (born 1927), and younger brother, Alfred Daniel Williams King (1930-1969), he grew up in the city’s Sweet Auburn neighborhood, then home to some of the most prominent and prosperous African Americans in the country. A gifted student, King attended segregated public schools and at the age of 15 was admitted to Morehouse College, the alma mater of both his father and maternal grandfather, where he studied medicine and law. Although he had not intended to follow in his father’s footsteps by joining the ministry, he changed his mind under the mentorship of Morehouse’s president, Dr. Benjamin Mays, an influential theologian and outspoken advocate for racial equality.

The Reader This EFL lesson plan is designed around a moving short film commissioned by Bells and directed by Greg Gray. In the lesson students write a narrative, watch a short film and discuss literacy strategies. I would ask all teachers who use Film English to consider buying my book Film in Action as the royalties which I receive from sales help to keep the website completely free. Language level: Intermediate (B1) – Upper Intermediate (B2) Learner type: All ages Time: 90 minutes

Martin Luther King Jr. Martin Luther King, Jr., (January 15, 1929-April 4, 1968) was born Michael Luther King, Jr., but later had his name changed to Martin. His grandfather began the family's long tenure as pastors of the Ebenezer Baptist Church in Atlanta, serving from 1914 to 1931; his father has served from then until the present, and from 1960 until his death Martin Luther acted as co-pastor. Martin Luther attended segregated public schools in Georgia, graduating from high school at the age of fifteen; he received the B. A. degree in 1948 from Morehouse College, a distinguished Negro institution of Atlanta from which both his father and grandfather had graduated. After three years of theological study at Crozer Theological Seminary in Pennsylvania where he was elected president of a predominantly white senior class, he was awarded the B.D. in 1951.

The top 20 music videos of 2015 Earlier this year saw two of this generation’s most exhilarating artists – Venuzualian producer Arca and Hood By Air label boss Shayne Oliver – join forces for a new musical project, dubbed ‘Wench’, a collab which resulted in the sounds of Cher, t.A.T.u, Crystal Castles and Fatboy Slim cut, spliced and stuck back together for one beautifully intense track “Galvanize”. Add visual artist Jesse Kanda into the mix and you get this mind-blowing, 15-minute video. In it, explosions are played back and forth in slow motion so they take on an almost otherworldly, hypnotic power and at one point, what looks like a lorry shattering into grey debris turns out to be a flock of flying birds.

ESL Cloze Quiz - Bed in Summer by Robert Louis Stevenson 1850-1894 (Michael A. Riccioli) a4esl.org Bed in Summer A Poem by Robert Louis Stevenson 1850-1894 Click the buttons to see the answers. In I get up nightAnd dress yellow -light.In , quite other way,I have go to bed day. The Tenses - Worksheets English Grammar Online Exercises and Downloadable Worksheets Tenses All downloads are in PDF Format and consist of a worksheet and answer sheet to check your results. Levels of Difficulty : Elementary Intermediate Advanced Present Tense Past Tense