Using Light and Shade to Bring Text to Life 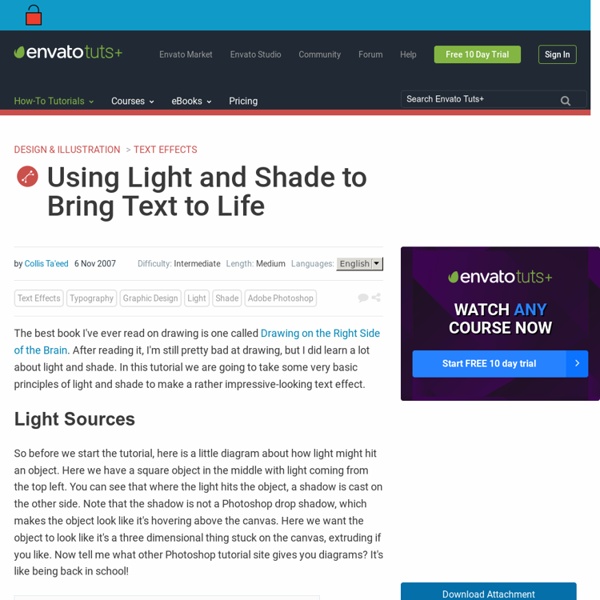 The best book I've ever read on drawing is one called Drawing on the Right Side of the Brain. After reading it, I'm still pretty bad at drawing, but I did learn a lot about light and shade. In this tutorial we are going to take some very basic principles of light and shade to make a rather impressive-looking text effect. So before we start the tutorial, here is a little diagram about how light might hit an object. Here we have a square object in the middle with light coming from the top left. We begin the tutorial by drawing a subtle Linear Gradient from dark grey to darker grey. Now we place some text. Next Ctrl-click the text layer and create a new layer above it. Set your foreground color to Black (you can do this by pressing the letter 'D' on your keyboard which restores the defaults). Now Ctrl-click the text layer again and create a new layer beneath the text layer. Here's what you should now have. Next duplicate the shadow layer, hold Shift and move it down and right again.

Video tutorial: Master perspective drawing in Photoshop In this tutorial, I’ll create a perspective drawing of a building as seen from an aerial viewpoint. I’ll show you how to set up the Photoshop document and where to place the vanishing points in order to establish a realistic sense of perspective. I’ll also explain how using layers can help to avoid over-complicating the image. In addition, I’ll reveal how to find the halfway point along a line seen in perspective. This useful technique can be used to create a number of different features within a perspective drawing. 01 The image space is indicated by the white area of this document. 02 Use the Line tool, set to Fill and 5px width. 03 Create a new layer, change the foreground colour, zoom in and draw over the lines of the building. 04 Draw vertical lines through the very middle of the left and right-hand walls. 05 Repeat the method used in step 03 throughout the whole image to build a detailed guide to the perspective of the building and the ground space surrounding it.

Illustrator Tutorial - Create a Cool Ad Design with Shapes and Patterns | GeekInspired.com Posted on April 28, 2008 by Bo I recently saw a holiday advertisement that had this cool effect to it. It had a pattern of shapes with a few of the shapes outlining some text. I thought it was a neat concept so I tried to reverse engineer what they had done and this is what I came up with. We will be creating this design inside Adobe Illustrator. While this design can be made inside Photoshop, it’s much easier to layout in Illustrator and you will end up with a more versatile master file in case you need to recreate the design for multiple purposes. 1. This rectangle will serve as the background for your design. 2. The smaller the shape the better. Once your shape is created go ahead and place it in the top left corner of your document. 3. The two fields we’ll be playing with are the Move > Horizontal slider and the Copies field. In this case, I moved the Horizontal slider (under the Move section) over to 19px and am making 40 copies. Again, let’s check the Preview box. 4. 5. 6. 7. 8. 9.