They Cracked This 250-Year-Old Code 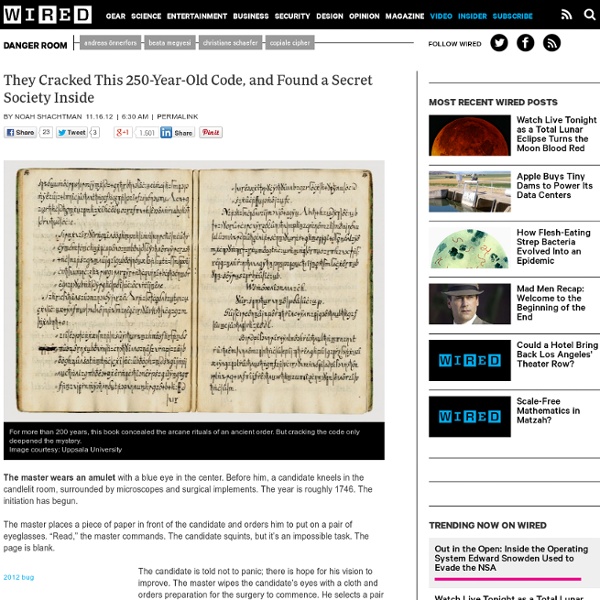 For more than 200 years, this book concealed the arcane rituals of an ancient order. But cracking the code only deepened the mystery.Image courtesy: Uppsala University The master wears an amulet with a blue eye in the center. Before him, a candidate kneels in the candlelit room, surrounded by microscopes and surgical implements. The master places a piece of paper in front of the candidate and orders him to put on a pair of eyeglasses. The candidate is told not to panic; there is hope for his vision to improve. The master starts plucking hairs from the candidate’s eyebrow. For more than 260 years, the contents of that page—and the details of this ritual—remained a secret. It was actually an accident that brought to light the symbolic “sight-restoring” ritual. In this case, as it happens, the cracking began in a restaurant in Germany. Pages: 1 2345678View All Related:  Encryption

2014: The year of encryption 9 January 2014Last updated at 19:05 ET By Paul Rubens Technology reporter Companies are under pressure in the current environment to make sure their encryption is up to scratch "The solution to government surveillance is to encrypt everything." So said Eric Schmidt, Google's chairman, in response to revelations about the activities of the US National Security Agency (NSA) made by whistle-blower Edward Snowden. Schmidt's advice appears to have been heeded by companies that provide internet-based services. Microsoft, for instance, says it will have "best-in-class industry cryptography" in place for services including Outlook.com, Office 365 and SkyDrive by the end of the year, while Yahoo has announced plans to encrypt all of its customers' data, including emails, by the end of the first quarter of 2014. For many smaller businesses too, 2014 is likely to be the year of encryption. Diamonds and paperclips Keeping the regulator happy 'Back doors' Continue reading the main story “Start Quote

Fact or Fiction: Encryption Prevents Digital Eavesdropping Since the dawn of the Web and ubiquitous free e-mail services over the past two decades, the need to secure personal information online has been evident but often ignored. Last month’s exposure of the U.S. National Security Agency’s PRISM program for collecting data on individuals suspected of plotting terrorist attacks, spying or other forms of malfeasance (pdf) has helped bring privacy issues back into the spotlight. Vint Cerf, Google’s chief Internet evangelist and co-developer of the TCP/IP communications protocol that makes the Internet tick, recently told The Times of London that computer scientists should devise an anti-snooping solution for the Web using encrypted communication. Unfortunately, cryptography’s ability to thwart online surveillance or theft comes with a number of caveats and qualifications. The catch is that users have to actively set up these programs. Secure Sockets Layer (SSL) protocol offers a broader example of how data can be encrypted in transit.

Encryption For Beginners In an Era of Total Surveillance By @AnonyOdinn If you’ve read the news lately, you’ve pretty much caught the drift of what’s going on. Surveillance is fast spreading to become a universal problem, governments are becoming the largest sponsors and purchasers of intrusive malware, and for all intents and purposes, all so-called “secure” systems are, simply put, not secure – at least not from governmental intrusion, and certainly not from the steady increase of corporate intrusion – a growing problem in a world where the concept of an open and free net is more at risk than ever. The purpose of this simple tutorial is to provide some encryption for beginners. This is not a tutorial on hacking. A couple of points before you proceed. If you are a journalist, or if you have special reason to believe you may be the subject of an active investigation due to your being named in a pending case or other similar matter, you should take other precautions, including reducing your online exposure when you are active in the field.

Easy Ciphers - most popular ciphers: caesar cipher, atbash, polybius square , affine cipher, baconian cipher, bifid cipher, rot13, permutation cipher It's Time to Encrypt Our Genomes The next time your privacy is invaded might not involve text messages, web browsing histories, or hidden cameras—it could involve the very stuff that makes you you. It’s time to start worrying about keeping your genetic information private. As genome sequencing becomes cheaper and as governments, researchers, doctors, and consumers find more reasons to sequence and store entire genomes, people are increasingly worrying about who will have access to them, and what they’ll do with them. Already, researchers can often determine who it belongs to based on publicly-available genome databases and some basic Googling. “We can infer the identity of individuals from their DNA by looking at the Y chromosomes, and in some cases, we can identify the surname of the person based on Internet searches,” said Yaniv Erlich, a genetic researcher at MIT who is working on genome encryption. I asked Erlich why we should care—you can’t change your genome, after all. He’s right. “It’s not there yet,” White said.

How to obtain and install an SSL/TLS certificate, for free Anyone operating a server on any scale should want a digital certificate to encrypt data between clients and services, whether for personal, office, or public use. That's a broad statement, but it holds true no matter how you slice it. With so many people accessing networks over WiFi or other untrusted networks for an increasing number of different kinds of services—calendars, contacts, Webmail, email, and so on—encryption is a must, whether via a VPN or by securing services one by one. While I recommend VPNs, they aren't always the practical, affordable, or correct solution. For remote email access, SSL/TLS is simpler and more straightforward, and you don't have to compromise on protection in the process. There can be something technically imposing about getting and installing a digital certificate, even though it has a high utility value, so I'm here to make it easier by breaking it down into steps that someone without encryption and command-line knowledge should be able to work with.

Switch to HTTPS Now, For Free Attention: In the wake of Heartbleed: if you're already using a certificate you installed before April 7, 2014, revoke that certificate, then issue and install a new one. From now on, you should see a delightful lock next to in your browser's URL bar, because I've switched this site to use HTTPS. Why you should bother doing the same: SSL's not perfect, but we need to make surveillance as expensive as possibleFor privacy not to be suspicious, privacy should be on by defaultAnd hey, bonus: more complete referrer information for people visiting from sites already using HTTPS (like Hacker News) This post shows how to do your part in building a surveillance-resistant Internet by switching your site to HTTPS. A quick overview: to use HTTPS on the web today, you need to obtain a certificate file that's signed by a company that browsers trust. Most certificates cost money, but at Micah Lee's suggestion, I used StartSSL. There are two things that could cost you money.

Warning Even though we're doing our best to offer you good tools to protect your privacy while using a computer, there is no magic or perfect solution to such a complex problem. Understanding well the limits of such tools is a crucial step in, first, deciding whether Tails is the right tool for you, and second, helping you making a good use of it. Tor is about hiding your location, not about encrypting your communication. Instead of taking a direct route from source to destination, communications using the Tor network take a random pathway through several Tor relays that cover your tracks. So no observer at any single point can tell where the data came from or where it's going. The last relay on this circuit, called the exit node, is the one that establishes the actual connection to the destination server. To protect yourself from such attacks you should use end-to-end encryption. So using Tails doesn't make you look like any random Internet user.