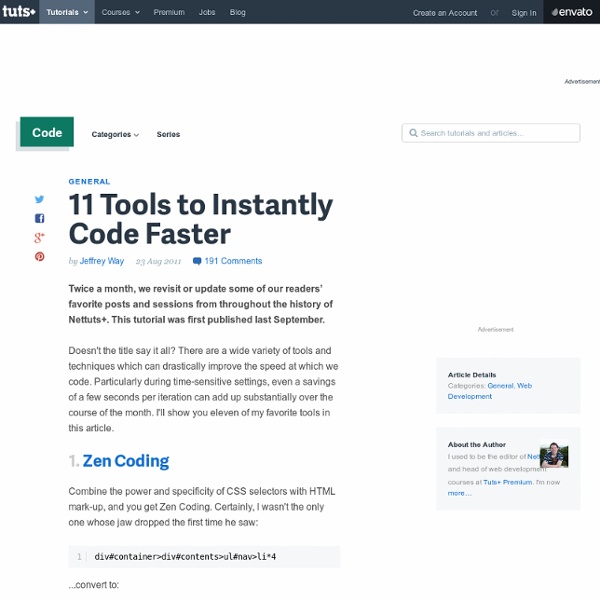 Twice a month, we revisit or update some of our readers’ favorite posts and sessions from throughout the history of Nettuts+. This tutorial was first published last September. Doesn't the title say it all? There are a wide variety of tools and techniques which can drastically improve the speed at which we code. Particularly during time-sensitive settings, even a savings of a few seconds per iteration can add up substantially over the course of the month. I'll show you eleven of my favorite tools in this article. 1. Combine the power and specificity of CSS selectors with HTML mark-up, and you get Zen Coding. ...convert to: In this last year, the Zen Coding project has gained considerable attention, and has been expanded to support a wide variety of code editors, including Espresso, Vim, Netbeans, TextMate, and Komodo Edit. "Zen Coding is an editor plugin for high-speed HTML, XML, XSL (or any other structured code format) coding and editing. Alternatives Sparkup 2. Alternatives 3. 4. Pro Tip 5.

High speed Coding with Zen & SASS - Web Design & Frontend Developement The Power of Awesome Frontend Development is experiencing golden times these days. With the hype on HTML5, CSS3, a brighter focus on JavaScript and sophisticated workflows, the process of creating great stuff on the web has never been more rewarding. In this series I'd like to give you a little taste of what it's like to save time and get even more efficient at coding HTML and CSS. We're gonna use two amazing quick-to-learn and easy-to-use tools that will help us to ease the development of great Websites and WebApps. In this first part we will learn about these two plugins, how they work and what they're capable of. Ladie's and Gents: Introducing Zen-Coding and Sass. Let me tell you up first: What you're about to learn will most likely become a part of your daily base equipment. Zen-Coding Zen is a way of creating whole blocks of HTML Markup Structure with just one simple line of code. So for example, lets say you want to create a <div> with the ID of "container". Fairly easy right? Sass ul {

kuler Sass vs. LESS "Which CSS preprocessor language should I choose?" is a hot topic lately. I've been asked in person several times and an online debate has been popping up every few days it seems. It's nice that the conversation has largely turned from whether or not preprocessing is a good idea to which one language is best. Let's do this thing. Really short answer: Sass Slightly longer answer: Sass is better on a whole bunch of different fronts, but if you are already happy in LESS, that's cool, at least you are doing yourself a favor by preprocessing. Much longer answer: Read on. The Much Longer Answer The Learning Curve with Ruby and Command Line and Whatever The only learning curve is the syntax. Winner: Nobody Helping with CSS3 With either language, you can write your own mixins to help with vendor prefixes. In Sass, you can use Compass, and Compass will keep itself updated, and thus the prefix situation is handled for you. In LESS, there are also some mixin libraries battling to be the best. See that?

Markdown Syntax Documentation Note: This document is itself written using Markdown; you can see the source for it by adding ‘.text’ to the URL. Overview Philosophy Markdown is intended to be as easy-to-read and easy-to-write as is feasible. Readability, however, is emphasized above all else. To this end, Markdown’s syntax is comprised entirely of punctuation characters, which punctuation characters have been carefully chosen so as to look like what they mean. Inline HTML Markdown’s syntax is intended for one purpose: to be used as a format for writing for the web. Markdown is not a replacement for HTML, or even close to it. For any markup that is not covered by Markdown’s syntax, you simply use HTML itself. The only restrictions are that block-level HTML elements — e.g. For example, to add an HTML table to a Markdown article: This is a regular paragraph. Note that Markdown formatting syntax is not processed within block-level HTML tags. Span-level HTML tags — e.g. Automatic Escaping for Special Characters &copy; 4 &lt; 5 1.

5 Mac Apps That Make CSS Preprocessors Easier to Use This post is part of a series that revisits some of our readers’ favorite articles from the past that still contain awesome and relevant information that you might find useful. This post was originally published on December 20th, 2011. If you’re a fan of CSS preprocessors, then you know that despite their usefulness, they can be a bit of a pain to work with at times. Most of them require some sort of Terminal voodoo to compile, which immediately scares off a good portion of potential users. As always, the Mac development community has come to the rescue with some amazing tools that completely take the effort out of the process. What Is a CSS Preprocessor? A CSS preprocessor is a tool that makes writing CSS easier, more flexible and arguably even more fun. Typically, a CSS preprocessor adds some interesting functionality to CSS such as variables, mixins, functions, nesting, etc. Five Apps to Process Your Files LESS.app Price: Free Supported Languages: LESS LESS.app Crunch! Crunch! LiveReload

Can’t Get Into Preprocessors? Try Zen Coding A ton of discussion lately has been given to preprocessors. These incredibly useful tools make coding easier, faster and more maintainable, but they’re certainly not for everyone. Whether or not you’ve jumped on the preprocessor bandwagon, you should give a fresh look to an old favorite that helps you dramatically cut your coding time without reinventing your workflow with compilers and other complications: Zen Coding. With Zen Coding, you can type a little and output a lot, just like with a preprocessor like Jade or Haml, only it expands instantly into the vanilla HTML that you love. Zen Coding vs. Zen Coding has been around for a number of years, so several of you reading this are bound to think that this is too old school to merit a discussion in 2012, but I’m willing to bet that lots of new coders have never given it a shot. I’ll start by saying what Zen Coding isn’t: it isn’t a preprocessor in the same vein as LESS, Sass, Stylus, Jade, Haml and the like. How Does It Work? Zen CSS

Sass vs. Stylus: Who Wins the Minimal Syntax Battle? Today we’re going to pit two CSS preprocessors head to head. You’ve no doubt seen lots of discussion about how SCSS compares to LESS, but where does Stylus, the new kid on the block, factor in? Can it possibly match the power and versatility of SASS? We’ll jump head first into both syntaxes and compare them side by side to see which is more logical and versatile. We’ll also talk about features and give you a clear argument for why one preprocessor is more powerful. Sass, Not SCSS One little detail needs to be addressed before we dive into this any further. However, for the sake of comparison, Sass is actually much closer to Stylus than its sibling SCSS. Alas, this is not an article on the merits of Sass vs. Basic Syntax Let’s start with a direct comparison of both syntaxes at their most basic level. As you can see, they’re almost identical. Flexibility One thing that I’ve always appreciated about LESS and SCSS is that I can still write plain old vanilla CSS within my stylesheet. Nesting

45+ CSS Grid Layout Generators Using a CSS Grid System is really worth considering if you’re planning to create a complex web design like e.g a magazine layout. For quite some time CSS Grid frameworks have been very popular and helped designers and web developers to create well structured and easy to maintain solutions. However there many options available and it is not an easy tasks to make the right pick when starting up a new project. This article will give you the overview and tools you need to get started by presenting more than 45 CSS Grid systems and tutorials on how to use them. If you are looking for examples and inspiration on grid based web design you need to check this article. Update: While the grid generators below still work I think you should now that it more or less have become the de-facto standard to use responsive layouts. Advertisement Introduction Cascading Style Sheets (CSS) is used to describe the presentation of a document written in a markup language. CSS Grid Layout Generators BlueTrip SenCSS