40 Incredible Secret Places Most Travelers Don't Know About. The Last One Blew Me Away... 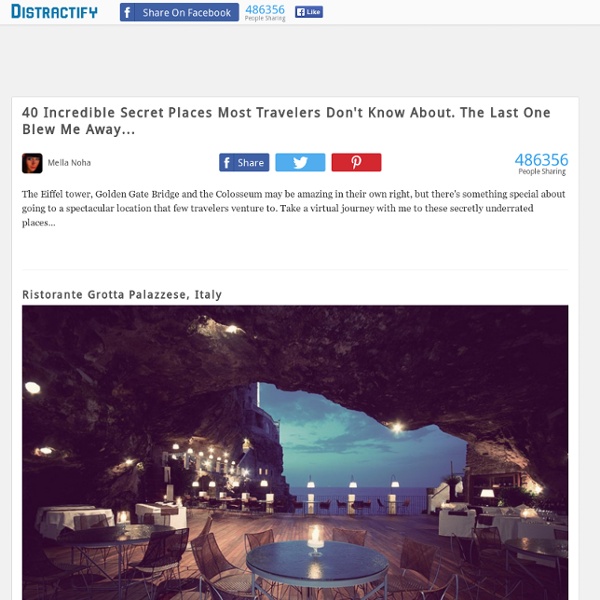 33 Unbelievable Places To Visit Before You Die. I Can't Believe These Actually Exist On Earth... So many other-worldly places exist right on our planet, and we never even knew about it. Here are 33 landmarks that look like paintings and scenes from science fiction movies. earthporm.com 6 Ways to Analyze Your Creative Ideas Great marketers, PR pros, and content creators have one thing in common--they use both creativity and analytics to develop their successful ideas. Christine Perkett dubbed this type of thinking as “Creatalitics” and gave an excellent definition for the term: “[Creatalitic thinkers] combine really creative and innovative ideas--those ‘dreams and visions’ with data and analysis--the ‘blazes of insight’ that tell them if their creations go beyond initial appeal and into the world of actionable value to the company’s bottom line.” Creativity is an important aspect of our jobs, but we should not neglect the warning signs from the left side of our brains pushing us to analyze our ideas.

The future of travel: what will holidays look like in 2024? What does the future hold for travel? Check-in by robot? Budget space flights? Virtual holidays? The 15 Best Travel Destinations in 2015 With 2014 coming to a close, it’s time to reflect and take a look at the up and coming trending destinations for the new year. Sure, its tempting to want to go back to the old favourites – London, Paris, New York… but what about discovering somewhere new? Somewhere off the beaten path, a travel destination yet to be fully discovered, an underrated city, or an experience only few will ever tick off their bucket lists? Here are the 15 best travel destinations in 2015 – put ’em at the top of your lists and beat the crowds, these destinations are set to boom in 2015 and beyond… This post was written by WOW and brought to you by Contiki Legends – Go make 2015 amazing! 1.

How To Recognise Famous Painters According To The Internet Art history has never been so easy! Reddit user DontTacoBoutIt (now a dead account) posted a series of famous paintings and gave short but hilariously accurate explanations on how to recognize their authors. According to him, Da Vinci’s works can be recognized by the bluish mist and locations reminiscent of Lord of The Rings movies, while Rubens’paintings can be identified by the figures’ large behinds. Though some may fault them for being gross over-generalizations, these descriptions take the recognizable essence of each painter’s work and put it in very easy words that anyone can understand and, more importantly, remember. But even more exciting is that commenters on Reddit and Imgur started sharing their own ideas for artist identification. It seems like they won’t stop until every artist in the world is explained.

Most Beautiful Forests in The World Bluebells in Halle`s forest, Belgium. From late April to early May a few acres of woodlands are covered by a splendid carpet of wild bluebell hyacinths. Photo by: Raimund Linke The 33 Most Beautiful Abandoned Places In The World Many people doesn’t know, and didn’t even heard about these famous abandoned places. Many of these places are really something amazing, but they are also really sad when you take a closer look at them. On the folowing list, you can see abandoned planes, abandoned ships, as well as the abandoned houses, and so many other things, that are really amazing and magnificent. ‘Grey City’ is a Documentary that Digs Deep into the World of Street Art Interested in Street Art? How about art in general? Maybe politics is more your thing?

The Other Mystery of Easter Island Moai statues Easter Island is branded into popular consciousness as the home of the mysterious and towering moai statues, but these are not the only curiosity the South Pacific island holds. Where the moai are fascinating for their unknown purpose and mysterious craftsmen, the island's lost language of Rongorongo is equally perplexing. The unique written language seems to have appeared suddenly in the 1700s, but within just two centuries it was exiled to obscurity. Known as Rapa Nui to the island's inhabitants, Rongorongo is a writing system comprised of pictographs. It has been found carved into many oblong wooden tablets and other artifacts from the island's history.

New Thought-Provoking Satirical Illustrations By Pawel Kuczynski Art isn’t just meant to look pretty – it can also be used to transfer ideas and messages. Polish illustrator Pawel Kuczynski’s grim and sharply satirical works, which we’ve featured before here, are a perfect example of art that speaks volumes. Kuczynski’s images are so powerful because they force us to face some of the worst realities of our times. It’s beautiful – not in a flowers-and-sunlight kind of way, but in a brutally truthful way. He addresses war, political manipulation and hypocrisy, environmental damage, economic disparity and many other ills facing mankind today. The images strike just the right balance between obvious and complicated – just about anyone can get what they mean, but you will have to discover that meaning first.

20 free attractions in London Who cares if London's hotels and restaurants tend to be on the expensive side? No city in the world has more free stuff to do. In addition to world-class museums without a ticket admission, you get the parks, canal walks, super markets (Portobello Road Market at Notting Hill Gate, Camden Market at Chalk Farm Rd, wonderful Columbia Road Flower Market at Gosset St in East London etc) and maybe some royal-spotting, and you can fill a life. Why Creative People Sometimes Make No Sense Photo by Sophia. I’ve been having an insightful shuffle through Mihaly Csikszentmihalyi’s book Creativity: The Work and Lives of 91 Eminent People. Mihaly is a seminal professor of Psychology and Management, and is the Founding Co-Director of the Quality of Life Research Center at Claremont. He writes: “I have devoted 30 years of research to how creative people live and work, to make more understandable the mysterious process by which they come up with new ideas and new things.