Which Traits Predict Success? (The Importance of Grit) 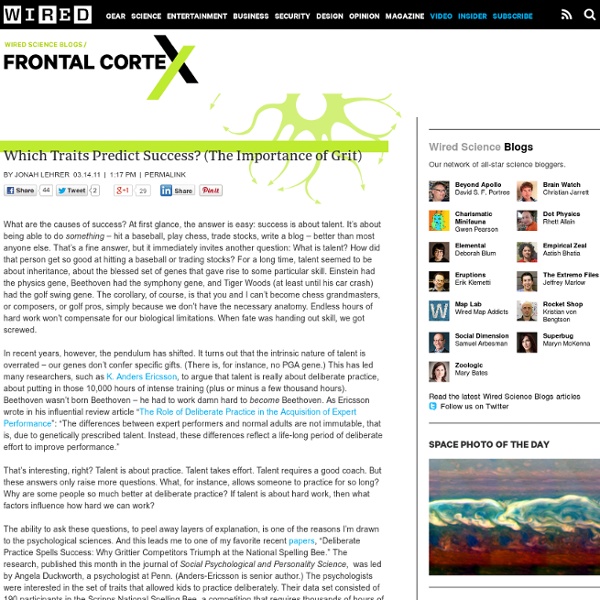 What are the causes of success? At first glance, the answer is easy: success is about talent. It’s about being able to do something – hit a baseball, play chess, trade stocks, write a blog – better than most anyone else. That’s a fine answer, but it immediately invites another question: What is talent? How did that person get so good at hitting a baseball or trading stocks? For a long time, talent seemed to be about inheritance, about the blessed set of genes that gave rise to some particular skill. In recent years, however, the pendulum has shifted. That’s interesting, right? The ability to ask these questions, to peel away layers of explanation, is one of the reasons I’m drawn to the psychological sciences. The first thing Duckworth, et. al. discovered is that deliberate practice works. But that still begs the question: Why were some kids better at drilling themselves with note cards? There are two interesting takeaways from this study.

The Future of Self-Improvement, Part I: Grit Is More Important Than Talent In the late ’60s, Stanford psychologist Walter Mischel performed a now-iconic experiment called the Marshmallow Test, which analyzed the ability of four year olds to exhibit “delayed gratification.” Here’s what happened: Each child was brought into the room and sat down at a table with a delicious treat on it (maybe a marshmallow, maybe a donut). The scientists told the children that they could have a treat now, or, if they waited 15 minutes, they could have two treats. All of the children wanted to wait. Are You a Rebel or a Leader? - Nilofer Merchant - The Conversation by Nilofer Merchant | 12:17 PM January 25, 2011 Everyone was being so agreeable. The CEO nodded, the VPs agreed, the Directors were polished in their reviews.

The Duckworth Lab Our Work Our lab focuses on two traits that predict achievement: grit and self-control. Grit is the tendency to sustain interest in and effort toward very long-term goals (Duckworth et al., 2007). Self-control is the voluntary regulation of behavioral, emotional, and attentional impulses in the presence of momentarily gratifying temptations or diversions (Duckworth & Seligman, 2005; Duckworth & Steinberg, 2015). On average, individuals who are gritty are more self-controlled, but the correlation between these two traits is not perfect: Some individuals are paragons of grit but not self-control, and some exceptionally well-regulated individuals are not especially gritty (Duckworth & Gross, 2014). [ Continue Reading Research Statement ] [ CV ]

The Secret To Creativity, Intelligence, And Scientific Thinking There’s a key difference between knowledge and experience and it’s best described like this: The image is from cartoonist Hugh MacLeod, who came up with such a brilliant way to express a concept that’s often not that easy to grasp. The image makes a clear point—that knowledge alone is not useful unless we can make connections between what we know. Whether you use the terms "knowledge" and "experience" to explain the difference or not, the concept itself is sound. Lots of great writers, artists and scientists have talked about the importance of collecting ideas and bits of knowledge from the world around us, and making connections between those dots to fuel creative thinking and new ideas.

Don’t Grade Schools on Grit Still, separating character into specific strengths doesn’t go far enough. As a teacher, I had a habit of entreating students to “use some self-control, please!” Such abstract exhortations rarely worked. What if the Secret to Success Is Failure? Over the course of the next year and a half, Duckworth worked with Levin and Randolph to turn the list of seven strengths into a two-page evaluation, a questionnaire that could be completed by teachers or parents, or by students themselves. For each strength, teachers suggested a variety of “indicators,” much like the questions Duckworth asked people to respond to on her grit questionnaire, and she road-tested several dozen of them at Riverdale and KIPP. She eventually settled on the 24 most statistically reliable ones, from “This student is eager to explore new things” (an indicator of curiosity) to “This student believes that effort will improve his or her future” (optimism). For Levin, the next step was clear. Wouldn’t it be cool, he mused, if each student graduated from school with not only a G.P.A. but also a C.P.A., for character-point average? Photo

TEDxTalks TEDx is launching this series, in collaboration with the Bill & Melinda Gates Foundation, with five talks on food and nutrition. Stay tuned for monthly TEDxSpotlights that curate and focus on global themes and ideas from the TEDx community. Take part in this program by sharing the trailer and the playlists with your community. 11 Signs You Have the Grit You Need to Succeed There are a ton of qualities that can help you succeed, and the more carefully a quality has been studied, the more you know it's worth your time and energy. Angela Lee Duckworth was teaching seventh grade when she noticed that the material wasn't too advanced for any of her students. They all had the ability to grasp the material if they put in the time and effort. Her highest performing students weren't those who had the most natural talent; they were the students who had that extra something that motivated them to work harder than everyone else.